Nokia Find their Own Voice For a Product Launch

The launch this week of the Nokia N85 and N79 has got me thinking about the respective marketing of Nokia and the big perceived rival of Apple with their iPhone. There's no doubt that Apple are the masters at generating buzz around a new product, and can effectively have the conversation take place around their strengths and 'knock-out' features of any new device, while the problems and negatives are effectively ignored.

They are probably the only company in the world that can get away with this. Everyone else needs to find their own approach.

So would Nokia's launch of their new 'top end' Nseries devices be a new approach for handsets that could make an impact online? I think so. Will it work? Depends how you measure it - if you're looking for Day Zero buzz then most of the buzz remained within the mobile sphere, although with some (naughty) sites talking about the devices 24 hours before the launch, the noise was a little bit less focussed than could have happened, but I don't think that this will matter a great deal. 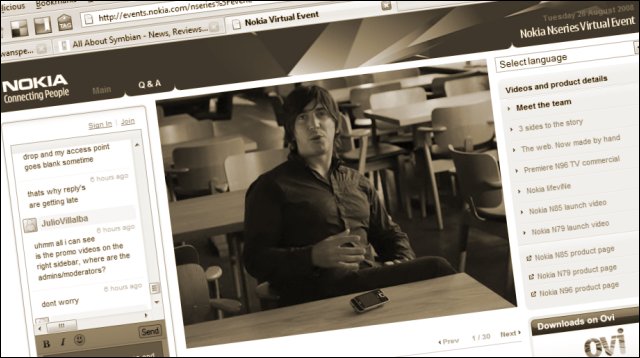 For this launch, Nokia have taken an interesting approach to the online world, with a dedicated site for the launch available to everyone (you can currently find it here). Rather than have a Nokia executive walking out in front of a room of invited journalists and having his words relayed by a webcam to the internet, the site carried launch videos for each handset, the TV adverts, links to product pages with detailed specifications and images, as well as an open chat room for people to discuss the products.

As the site opened Tuesday morning, a number of Nokia employees made themselves available in the chat room to answer any questions on the launch - as well as listing times later in the day when there would be a scheduled Q and A session in the chatroom. Times which are nicely staggered for European and American commentators to get involved in at least one of them.

Admittedly, those visiting the site are the in-crowd, those watching for Nokia products in order to write about them, but it is these people that will go out, write about the launch and products and create a groundswell of content about the new handsets - and it is those articles that the general public will read and use to help make their purchasing decisions.

I'm of the belief that people will remember something if they have to discover it themselves, as opposed to being lectured on the topic, and this is precisely why I think Nokia's Nseries event launch is worth singling out as successful. Let's face it, announcing a new phone is rarely going to draw headlines - yes, I know, the phone from Cupertino can walk on water and slice a fish into five thousand pieces but that's the exception that clearly proves the rule.

With this online presence and the creation of an 'event' from the simple releasing of some information, I think Nokia finally have worked out their own unique way to present themselves to their supporters and the rest of the world. Compare this announcement to the launch of 'Comes with Music' at Nokia World last year. That service (which is still to arrive in the shops some nine months later) was announced with a few bullet point slides and little explanation as to the impact it could have, or even the mechanics of the song distribution or the restirictiveness (or open-ness) of the DRM that would be deployed. Trying to find even basic details of the service wasn't at all easy. 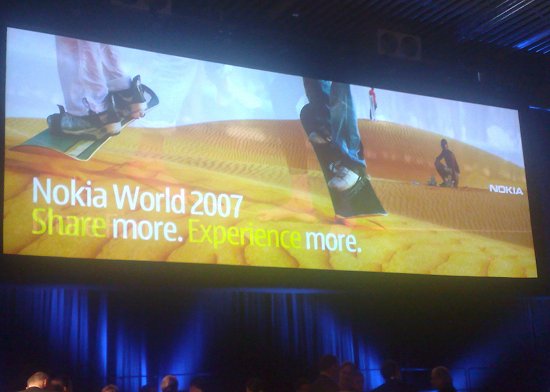 That's not the case with this weeks launch. All the glossy media are there, the niggly details so beloved of sites like All About Symbian are easy to find, and there's a two way conversation going on with the people behind the phone for anything that remains unclear.

Beyond that, Nokia have been incredibly hands off. There's no big message that they are wanting to push - although you can't help but notice the use of Ovi to host the videos and the new personal media service of 'Lifevine' in the sidebar - they've been left for you to discover yourself.

In other words, Nokia are more than happy for the product to stand on its own. There's no need to reinforce points like a needy child. If people are looking for an angle to take the story, then Nokia have it for them if they want it, otherwise "here are the devices, now take them into the world and let them find their own space."

There are no rock star style events, there's no massive personality on stage saying 'just one more thing' like a latter day Columbo; this is how Nokia want to present their handsets and their companies. Not as the focus of a single man's vision, but as a team effort, from lots of people inside the company, to lots of consumers out there... 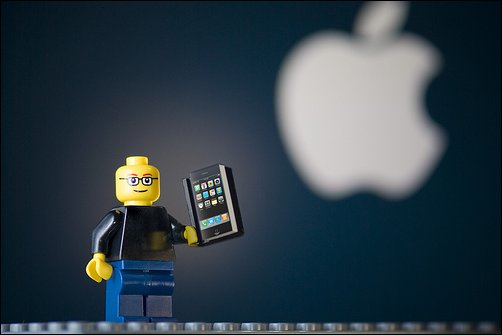 At the end of the day, what matters is how many units are sold. With the N85 and N79 due out into the retail stores in a few weeks, the buzz generated from this online event will let people know that a new phone is out there, even if they never visit the actual launch site. It starts the blogs talking, and gives them plenty of factual back up.

While I may look at the Apple distraction of launches and sycophancy, the realisation is that the pure oxygen of publicity that this can deliver to a product suits the corporate mentality of Apple, but doesn't reflect on the more practical hands from Finland. In today's Nseries launch, it looks like Nokia has found their own style and method that allows them to reach out to the media in a way that fits the way the company works.

There's no need to copy another company when you have found your own voice.

Apple can keep their glitzy launches and millions of worldwide fans - today I was given the heads up on a new phone, all the information I wanted, a central source of information, and for once I didn't get the feeling that Nokia had done anything wrong. As to the phones themselves, we'll be having a look at them, and their impact on the ecosystem, over the next week here at All About Symbian. For now though, a thumbs up to the PR bods is deserved.

Filed: Home > Features > Nokia Find their Own Voice For a Product Launch