Just because you use a Smartphone doesn't mean you're a Geek

Steve Litchfield explains that a smartphone, properly used, enhances your life, rather than taking it over - in theory.

Now, Shaun McGill, over at the PDA247 empire, is a nice enough chap, but some of his recent posts (here, here and here) have got me thinking.  It seems to me that he's gone from one mobile extreme to the other. On the one hand, he's been used to the classic PDA lifestyle, which seems to be based around 'how many different applications can I make use of on the one device?' - also known as the 'how many hours can I spend fiddling with my PDA each day?'. I used to see a lot of this in my writings for Palmtop User magazine (which is still going, despite the rumours, albeit at a reduced publication frequency) - you'd get application after application designed to help you organise your thoughts on this that and the other, set life goals and divide the minutae of your life into myriads of hierarchical tasks. All very fascinating if you've got hours to spare each day but personally I could never see the point - a user would waste far more time entering data into (and sorting data in) their PDA than they would through doing things in the same way as the rest of the world, i.e. slightly (but not very) inefficiently.

On the other, he then abandoned his PDA/smartphone for almost everything, going back to a paper Calendar and Address Book, declaring: "I do not miss it at all - I have a lot more free time (due to not recovering from errors and tweaking it constantly) - I appear to have more control writing things down makes the information stay in my head and I remember what needs to be done. After so long just typing away and forgetting the entry until the alarm pops up I had lost that ability - I am surprisingly a lot more relaxed about things. I do not try to do too much and just refer to my notebook on occasion to check some details - Paper does as good a job for personal information management as a PDA"

Now, I can quite see that going from the first position to the second will generate a lot of free time, but isn't this a classic example of 'throwing the baby out with the bathwater'? This is probably both stating the obvious and also preaching to the converted, but there's a happy middle ground between the two positions, where your smartphone helps you where it needs to and doesn't get in the way of 'life' the rest of the time.

It's been very noticeable that a vocal minority from the PDA world (Palm and Pocket PC devices) have arrived in the smartphone world kicking and screaming, asking how anyone could live without the power of Datebk5+, Agendus or Pocket Informant (go look them up...) These are people from Shaun's first world, those who love to micromanage their time and activities, and for whom PDA use is as much a hobby as a tool.

From the very beginning, S60 (for example) was shouted down for having a weak Calendar application. It's true that the very first versions lacked a few refinements, but since (for example) S60 2nd Edition FP3, I'd say that the balance of usability and functionality is about perfect. No, it's not possible to micromanage your time in the same way as you 'used to' under Datebk5+ on your Palm PDA - but then I contend that you shouldn't need to. And remember that the original 'PalmPilot' vision that was so successful employed a relatively simple Date Book application.

Even more than a PDA, a smartphone is designed to be used when truly mobile, one handed if necessary, perhaps hanging from a tube strap or speed walking into work. And, being built within a 'phone' model rather than that of a PDA, there's less ambition to have you poking at its buttons for large parts of your day. This usually means sacrificing a little functionality (compared to PDA equivalents), but there's still plenty left to do the job. 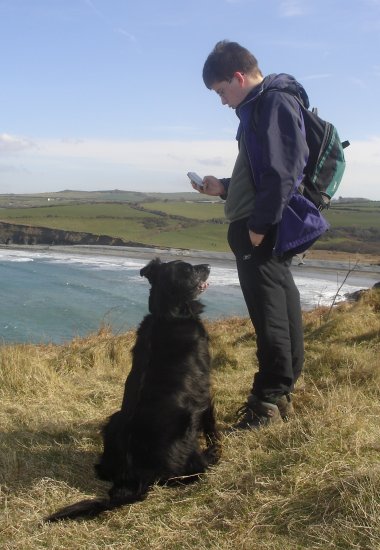 AAS's Rafe, distinctly NOT locked away in a dingy office wrestling with PDA sync problems or spending hours typing in his life's priorities...

Used properly, your smartphone won't take up lots of time 'recovering from errors and tweaking it constantly' - you'll simply use it and appreciate what it can do for you. No need to keep fiddling with it unless you're a) me or b)an E61 user (only kidding, guys).  And while I'm sure that not having a PDA or smartphone to manage your Calendar will improve your natural memory, back in the real (busy) world family and work distractions mean that without an electronic reminder you will miss important meetings and appointments. And the thought of going back to a paper address book, filled with crossings out and Tippexed out entries, fills me with horror.

The truth is that, used sensibly, a smartphone (or any other similar mobile device) enhances your life, rather than takes it over. Of course, being extensible, you can install hundreds of third party applications just as you did with your Palm or Pocket PC and then spend hours trying to get them to all behave together. More likely though is that you'll install just the handful that suit your own lifestyle, whether it's a satellite navigation app or a game or an ebook reader or a 'safe' of all your passwords and PINs.

And you'll stop there, with a nicely kitted out smartphone that doesn't intrude into your time with family and friends, and doesn't need constant babysitting. Rather, it enhances your life, giving you extra capabilities just when you need them.

Filed: Home > Features > Just because you use a Smartphone doesn't mean you're a Geek