Forgive the thought flight into the unknown, but most readers will be aware by now that AAWP's infrastructure is less than efficient - see below for the various things that are actually broken. Anyway, I thought I'd profer a small glimpse into one idea. Your comments welcome, perhaps now more than ever!

Add it all up, then add in server costs that were negotiated in the early 2000s and which seem archaicly large now (I'm obviously not going to go into details there), and I've been thinking about ways to take AAWP forward, if at all.

One option is to forego the existing custom code and server infrastructure and to simply transition things to a simple 'blog' structure. I've mocked up such a layout with some recent AAWP content here: allaboutwindowsphones.blogspot.com : 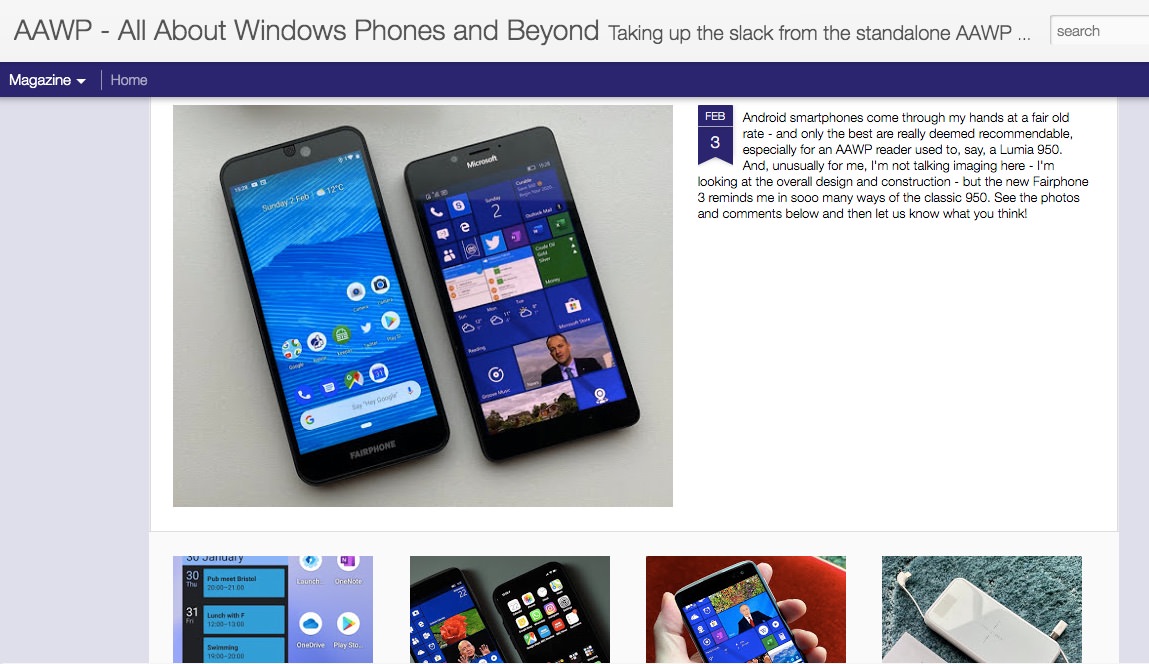 Comments? It would be a drastic break from the current PHP/Disqus system, but visually and practically it would work, while - in this case Google's - infrastructure takes up the burden of bandwidth, SSL, mobile responsiveness, and social links.

In terms of content, you'll notice the tweak in title too: "AAWP - All About Windows Phones and Beyond" with subtitle "Taking up the slack from the standalone AAWP and AAS for 2020". OK, it's all a little wordy, but one possible future is to cover mobile more generally, but seen through the lens of traditional All About interests and themes.

A lot depends on what Rafe wants to do - and has time to do - of course. The reworking of the site's code is a huge time commitment for him, as you might imagine. So perhaps a simple step jump up to a blog format would be best after all?

The downside of such a move is the loss at some point of Disqus story comments - the articles themselves would carry on being available via the wonder of the Internet Archive system. I'd try and carry across a limited back catalogue of articles, to appear in the new site/blog in its archive.

So there we go - have your say, anyway, though do please note again that I'm not going to go into any detail on finances and costs - they're confidential to Rafe and myself. And are for us to worry about!

PS. While everything's up in the air, if you have PayPal money from eBay burning a hole in your account, you know where my tip jar is - it all helps!