One of the reasons why there has always been a big debate as to what exactly constitutes "a smartphone" is that the definition itself keeps changing. Once we had dumb phones, then high end communicators and touchscreen multimedia gadgets for geeks, and then - by 2010 or so - enough people had what we had been calling 'smartphones' that they became mainstream and just 'phones'. But just what functions got added in each era, where are we now, and where do the different platforms stand? 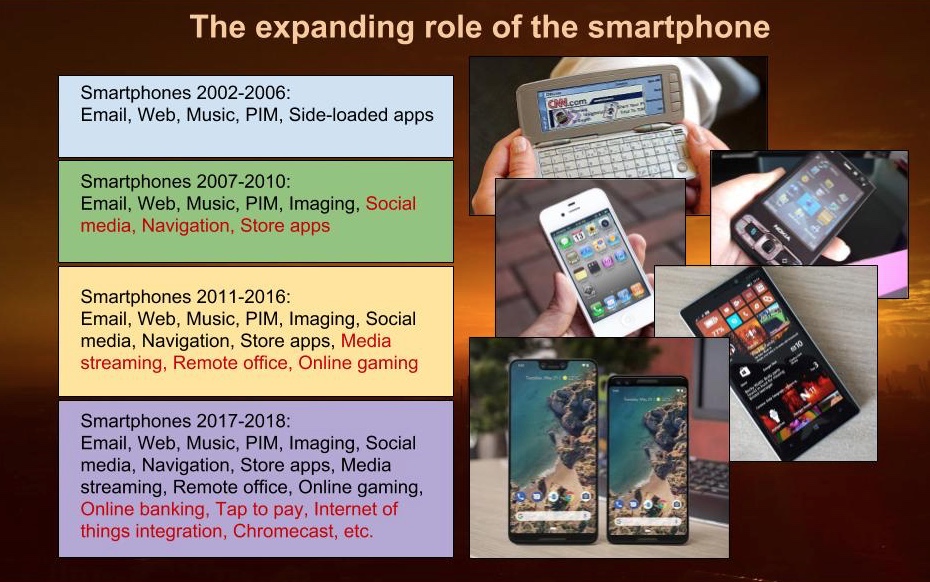 I've divided smartphones (roughly) into four eras, as shown above. And, for each successive era, I've marked the new functions in red. These are the things that we've expected from our (smart)phones that weren't a requirement in the previous era. And you'll hopefully agree that it's striking how much more our phones are required to do now, in 2018, compared to the feature sets back in 2002.

Fourteen years ago, in 2002, simply being able to install an add-on application made a phone smart. It signified a 'proper' operating system (usually Symbian OS, Palm OS or Windows Mobile) and said application usually had to be copied across from a Windows PC with a proprietary cable. That was it. And there weren't that many third party applications to try out, certainly not when compared to the bulging application stores for iOS and Android today.

In 2018, the graphic shows just how much a modern (smart)phone is required to handle - and these are all essentials for most of us. In fact, our phones are so much part of our life that the fear of losing them is greater than ever before - lessened (thankfully) by the way everything's also (usually) backed up or synced online, so a brand new phone could be substituted and it wouldn't take that long to get back up to speed.

This feature being hosted on AAS and AAWP, it's instructive to note where both platforms fade. Symbian OS was there at the dawn of smartphones (I was 'there' on day one in 1998 when Symbian was created. I had a phone call from one of the prime movers at Psion to explain - and to make sure that when I typed in the domain that I spelt the name right and didn't miss out the 'm' - cough!) and it dominated the first smartphone era above, with 60% market share for much of its life. It's fair to say that the launch of the finger touch-based iPhone/iOS and then Android in the second era gave Symbian a huge kick in the pants to evolve or die. It did evolve and embraced social media, navigation (in which it was a pioneer, thanks to Nokia), and even Store apps, but its time was drawing to an end as the third smartphone era dawned.

Era number three in my chart brought an increased focus on living online, with the likes of YouTube, Spotify, Netflix and so on, all being practical and expected. Symbian struggled with all of these, but AAWP readers will know that Windows Phone, Microsoft's re-invention of their mobile efforts, did rather better and largely kept up with the exponentially growing iOS and Android for a few years. The three functions listed in red above? Media streaming saw Windows Phone (and then Windows 10 Mobile) starting to struggle, with a 'spotty' Spotify client(!), a reliance on third party YouTube clients, a Netflix client that never worked as smoothly as on other platforms, and no practical way to watch Amazon Prime Video content at all. Remote Office worked pretty well, with virtual desktop solutions and Sharepoint, etc - this was one of the highlights of using Windows on phones, after all. But 'Online gaming', also quoted above, was extremely patchy on Windows and gamers usually had to make do with titles from a year or so back, if available at all.

And so to smartphone era number four. Symbian is a dot in the rear view mirror, Microsoft has pulled back from all Windows 10 Mobile development, and the extra 'phone as digital hub' functions that are now taken for granted just aren't possible under the two platforms. Developers flock to iOS and Android because of the sheer numbers of users and we've long since passed the point of no return in terms of any mobile platform other than the big two being commercially practical to develop for.

I wrote previously about 'moving goalposts' and this is still a fair analogy. It's not as if 'smartphone' was a fixed specification or target - the role keeps expanding, as shown in my infographic. I predict that era four will extend to 2020 and then we'll be looking at extra uses again. Perhaps augmented reality, genuinely proactive virtual assistants, 3D displays and holographic comms. Who knows?!