10 years of iPhone? Most of its 'innovations' came in with Nokia and others

The tech media has been falling over itself in the last week to talk about the ten year anniversary of the Apple iPhone, that moment when Steve Jobs revealed the shape of smartphones to come. All singing, all dancing? It really wasn't. Revisionist history says that the iPhone introduced all the features we see in today's smartphones, but that's not accurate...

I guess I shouldn't get too worked up about people rewriting tech history - but as one of the writers behind All About Symbian (and now AAWP) I just can't help myself put the record straight. Tech journalists (mainly American) have been falling over themselves to praise the iPhone as the point where the modern smartphone was born, but they're only right in one small sense.

And even that small sense is highly debatable. Think of the iPhone of 2007 and then today's phones and there's a clear sense of continuity of a full-screen experience with capacitive touch. Yet smartphones had been all-screen for years in the Windows Mobile world, with devices like the O2 XDA launching in 2002, a full five years before the iPhone, and based on the existing Windows Mobile PDAs of the previous few years. Even though the iPhone was absolutely to be credited for bringing capacitive touch to the mainstream phone world, it wasn't the first - the LG Prada had a capacitive touchscreen six months previously. 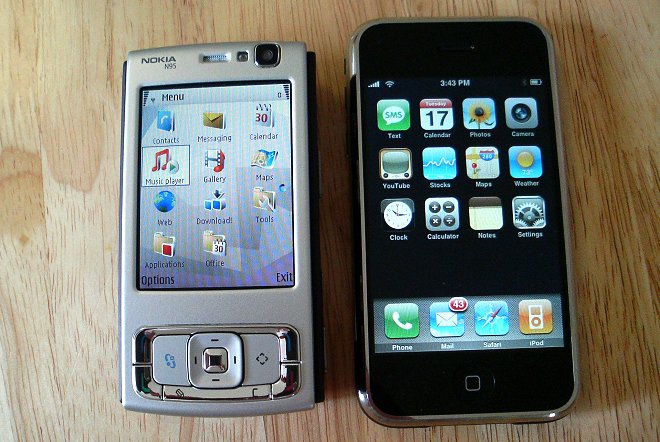 Nokia N95 and the original iPhone, for comparison. Outstanding functions and capabilities versus outstanding ease of use?

All other functions were represented in existing smartphones. Over in the Symbian world (the dominant smartphone platform from 2000 to 2009, a full decade), the Nokia smartphones - in particular the Nseries - had pioneered the inclusion of a GPS receiver, had introduced the use of accelerometers, with the N95 being the obvious model to point to, being launched at the tail end of 2006, the year before the iPhone's release.

Then there are good cameras, with some of the Sony Ericsson 'feature phones' (culminating in the K850i from summer 2007) containing high megapixel units along with Xenon flash, though again it was Nokia that brought high megapixel imagery to the smartphone world with the N95 and N95 8GB, plus the N82 (again with Xenon flash).

In terms of features, remember that all the early Nokia Series 80, Sony Ericsson UIQ and Nokia Series 60 (S60) smartphones from 2002 to 2006 had full operating systems, with vibrant third party application scenes, full file systems, copy and paste(!) and full web browsers (based on the same Webkit code as the iPhone).

With hardware media controls, landscape UI, full file and office editing, advanced imaging functions, and an onboard application store - the Nokia N95 pretending it's a laptop (well, almost), and many months before the original, limited iPhone was even available....

Which doesn't leave much for the iPhone to have 'innovated' with. Today's iPhone ranges do include all of the above (great camera, GPS, sensors, applications, even - cough - copy and paste!), but it has taken most of the celebrated decade for the iPhone to have really caught up with the rest of the industry in terms of raw technology.

Steve Jobs said at the iPhone's launch that it had 'Software that’s at least five years ahead of what’s on any other phone' - which is accurate in that the iPhone is rightly responsible for smartphone UIs that are intuitive enough not to need to ship a paper manual with each phone (remember those?!), but this quote is often mis-remembered as Apple saying that the iPhone itself was five years ahead. Jobs said 'Software', not hardware. And even then the original iPhone lacked third party applications and basic editing functions, so what Steve Jobs really meant was 'a UI that's five years ahead'. 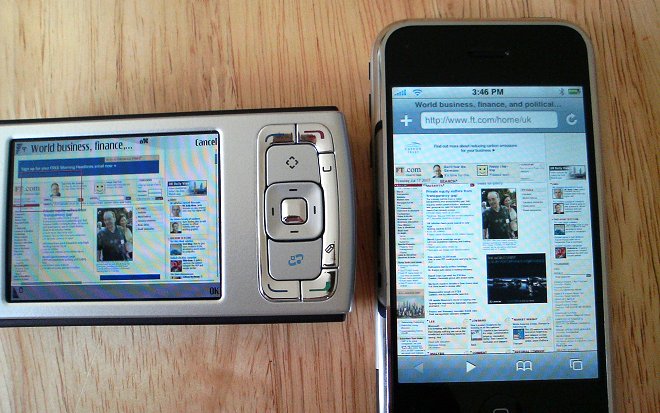 Perhaps showing that screen size was about to become king - identical web browsing on the N95 and original iPhone, but the latter has a faster and more optimised chipset, but moreover a much bigger screen. The iPhone stayed at 3.5" or 4" for years, but made the move to a more competitive 4.7" and 5.5" in 2014. Meanwhile, Nokia topped out at 6" with their Lumia 1520, back in 2013...

Take the iPhone's basic UI concepts (multi-touch zoom, rubber banding, predictive keyboard) and then add them to everything that Nokia, Sony Ericsson and LG (among others) had been using in phone hardware previously - and then, and only then do you get the smartphone as we've known it for the last five years. Apple was very important in the phone story, I agree (not least, making smartphones 'cool' to the mainstream and not just the prerogative of geeks and enthusiasts). But so were all the other manufacturers, regardless of what happened to them or where they are now (for a multitude of mis-management or political reasons that we don't need to repeat here).

Credit where credit's due.

Filed: Home > Features > 10 years of iPhone? Most of its 'innovations' came in with Nokia and others