The Microsoft buy-out: is there an impact on the Symbian world?

It seems that Tuesday's news of Microsoft buying Nokia's devices arm, lock, stock and barrel, generated something of a storm of comment, mostly on conspiracy lines. But, this being All About Symbian, I wanted to address the question of whether the news will have an direct impact on the Symbian world. Read on for my thoughts.

Before looking at Symbian specifically, having had a mountain of questions aimed at me (Steve), wondering about my thoughts on the whole saga, I should say that I don't agree with the outright conspiracy theorists, claiming that the last three years (the fall in market share and share price, the relative underachievement of Windows Phone and the sale to Microsoft) were all pre-planned - it's clear that no one could have foreseen all of this in detail. However, as did many others, there were signs all along that Microsoft, Nokia and Stephen Elop did at least have this outcome as one of the likely possibilities.

For example, the use of "Lumia" rather than a Nokia device number or letter combination (as on all the feature phones and Symbian devices) could have been a response to Samsung's "Galaxy" brand on Android. Or it could have been a forward looking decision that meant that "Lumia" could possibly be passed on, seamlessly to another manufacturer brand, in this case Microsoft? [Ditto "Asha", by the way]

Similarly, the rebranding of "Nokia Maps" to "HERE Maps" on non-Symbian platforms also seemed a little odd at the time, but with hindsight it makes total sense, since the maps side of Nokia has been free to expand into other markets (e.g. cars and HERE Auto), especially now that 'Nokia' as a company isn't free to make phones for a few years.

But, I don't want to get too bogged down in smartphone OS politics here. Stephen Elop's first big move at Nokia was, of course, to publicly slam Symbian in a 'leaked' memo and then announce that Symbian was to be End-of-Lifed and Windows Phone to be Nokia's main smartphone platform going forwards. Since then, we've had several new Symbian smartphones (notably the Nokia E6, 700, 701 and 808 PureView), numerous platform updates (Belle, Belle Refresh, Belle FP1/2) and a mountain of patches and updates, but these do seem to have slowed significantly in recent months.

Nokia originally claimed that support for Symbian was planned "until 2016". In terms of hardware repair and online support, this sounds about right. Most Nokia Care Points (e.g. here in the UK) run as independent franchises and they'll be happy to deal with warranty repairs or, more likely at this stage considering device ages, take user money for commercial repairs, so not much will change here with Microsoft running the (mainly Windows Phone) show now. Nokia-run Care Points and support centres will apparently 'be transferred to Microsoft' and 'customers won’t actually experience any difference'.

Even the official online (support &) discussions forum sees the majority of responses coming from either other users or Nokia employees in their spare time. Most the latter will now work for Microsoft but their motivation hopefully won't have changed too much. And official representatives, though already re-trained in Windows Phone/Lumia matters, will still retain their Symbian device knowledge.

What of the Nokia Store, the first port of call for Symbian applications in the last few years? From a very shaky start, the Store client and the server functions improved markedly, to the point where the user experience was at least in the same ballpark as the iPhone and Android app stores, even if the range of applications and games was a lot smaller. Already (mid 2013) we're seeing some commercial applications and games pulled from the Store, presumably because the developers are trying to simplify the range of platforms that they support, while more and more (Asha-friendly) Java applications are appearing in the lists for Symbian too.

Most of us have experienced download errors from the Store this year, often repeatedly, plus strange search results at times (my favourite is to search for "cutetube" and have the Store return "Not found: did you mean 'cutetube'", etc!) I doubt that the Store will suddenly disappear in terms of server functions - after all, the Store still works fine for old S60 3rd Edition handsets, even five years after the phones appeared. What I do expect to see is a gradual thinning of decent commercial applications and more developers offering install files on their own sites, either instead of on the Store (as with Track@Way) or in addition to it. With Symbian being totally open in terms of file system, it's actually very easy to install applications from such sources and the major hassle is perhaps for developers wanting to monetise their apps, since they'll have to rely on payment systems on their own sites. As more and more developers go down this route, hopefully AAS and other curated lists will play a part in linking Symbian users to the best applications and games out there.

Although we don't expect any significant new firmware updates to roll out of Nokia for any Symbian hardware from this point on, it should be noted that, for the technically minded, there are options (e.g. here) for those wanting to try out custom firmwares, which continue to improve and impress. 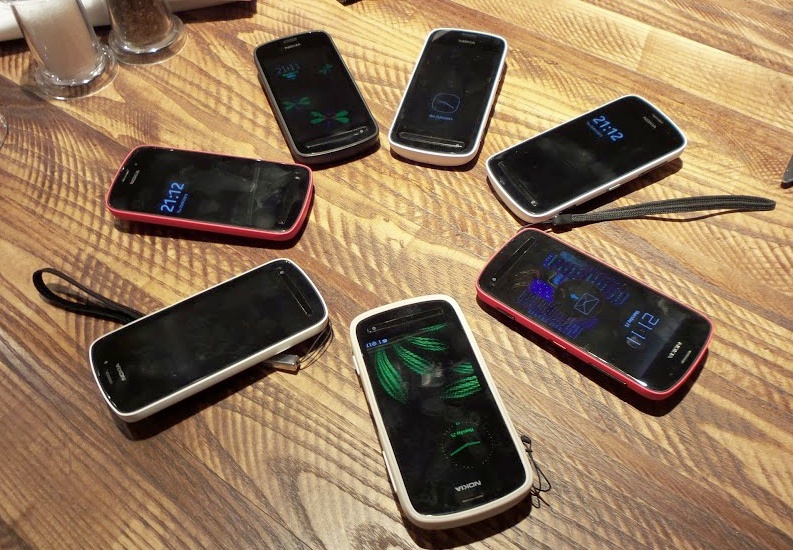 Sales and new device launches are, of course, irrelevant, since the Nokia 808, from over a year ago now, was declared to be the last Symbian-powered device and, we believe, the last Symbian devices to be made have also been shipped. Trying to buy a brand new Symbian smartphone from official channels is tricky now and most still available are from resellers trying to clear stock. (Happily, there's also the usual thriving second hand market.)

It's not clear what will happen to after-market accessories, though supply of hardware that's specific to Symbian (e.g. the OMTP multimedia headsets) is already low and (again) resellers clearing stock online are the best bet. If you have been eyeing something up, grab it while you can?

In summary, the current situation for current Symbian smartphone owners and for developers is unlikely to change much with Microsoft's buy out of Nokia's phone business. The deal has happened so late in Symbian's life that it's largely irrelevant. Aspects which were already declining will continue to decline, etc. And aspects which are currently self-sustaining will carry on being so.

It should be emphasised, of course, that smartphones, their OS and applications all have a life beyond whats currently on sale in shops. There are still around 100 million people in the world using Symbian smartphones on a daily basis and All About Symbian will be here to bring news of applications, directories, custom firmwares and anything else of interest. Posts may not be as frequent as they were in 2010 and 2011, but we. Will. Be. Here.

Filed: Home > Features > The Microsoft buy-out: is there an impact on the Symbian world?