The 'ins and outs' of PureView zoom on the Nokia 808

I've often proclaimed that the most natural way to use the Nokia 808 is in one of its 'PureView' modes, i.e. using the oversampling to produce the legendarily 'pure', noiseless pixels, rather than shooting in the somewhat artificial 'full' resolution modes, which expose the usual raw sensor pixels and their noise. However, when using the intuitive PureView zoom, you effectively end up down at the same 1:1 pixel use. Is this a problem? Exactly how far can you zoom in anyway? When should you use PureView zoom and when should you try to resist? Hopefully I answer these and other questions below.

Let's start with the basics. Your Nokia 808 PureView has a 41 megapixel sensor, but not all of it is in use at any one time. For starters, assuming that you're running it in the default 16:9 aspect ratio (so that your photos match the screen layout), you're 'only' using the central 7728 by 4354 pixels. This is still quite a lot, around '34' megapixels, which is why the default is to output a 5 megapixel 3072 by 1728 'PureView' image, with every pixel in the photo deriving its value from up to seven pixels in the underlying sensor area, i.e. there's oversampling. In addition to getting a more accurate readout of colour and intensity, the oversampling also means that random digital noise  (due to the quantum nature of light - photons, etc., plus random electronic fluctuations in the sensor) is averaged out and virtually eliminated.

With me so far? In fact, the paragraph oversimplifies things slightly, in that the actual sensor pixels are either red-sensitive, green-sensitive or blue-sensitive and a Bayer algorithm is run at a low level to combine these into a virtual array of 'proper' colours - nearly all digital cameras work this way and for all intents and purposes we can ignore this ultra low level processing.

Of course, instead of oversampling, you can also use the extra resolution to crop into the sensor, so that even at a 5MP output resolution, you're effectively taking the central block of pixels from the sensor, using all the original information. This means that you've effectively zoomed in, yet without using any fancy (and usually bulky) optical moving parts (other than the usual tiny focussing movements).

If you do the maths, it means that on the Nokia 808 you can effectively zoom in when taking a 5MP photo by a factor of 2.5x - this is usually rounded up in Nokia's marketing materials to "3x", though in fairness if you use the Creative 2MP mode instead of 5MP, you can effectively zoom in by 3.7x - though this is rather artificially low in terms of resolution, and of course you're not gaining any actual detail - you're still using the sensor at 1:1 when fully zoomed in.

Zooming in on the Nokia 808, as you'll know, is done by sliding your finger up the viewfinder. To zoom back out, slide it down again - and you can stop any any point, halfway, if needed or appropriate.

So take a typical scene with plenty of light, in this case down at the lake: 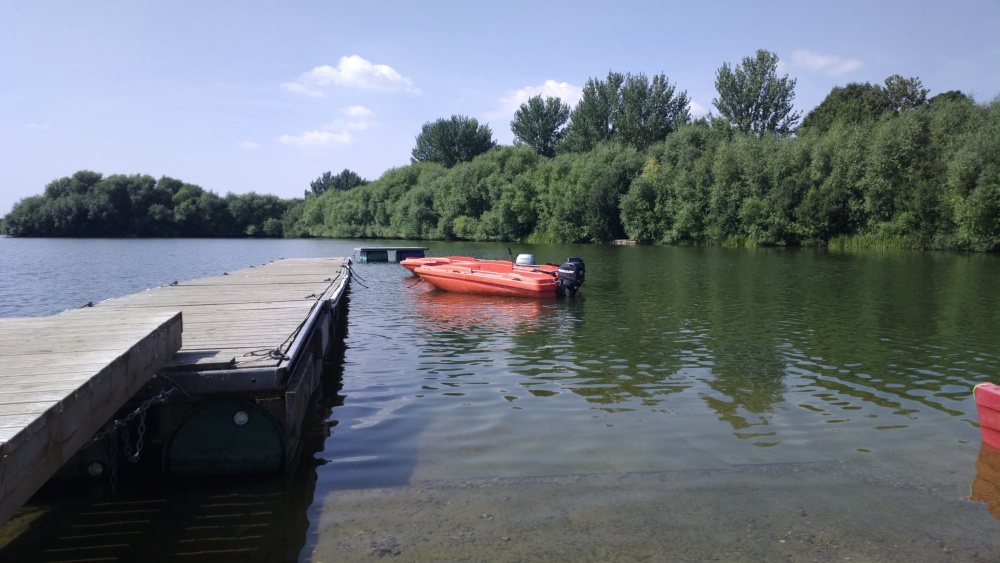 It's the perfect opportunity to try out the Nokia 808's PureView 2.5x zoom, to get closer to the boat and its detail. Here's the same scene, but zoomed in real time on the 808: 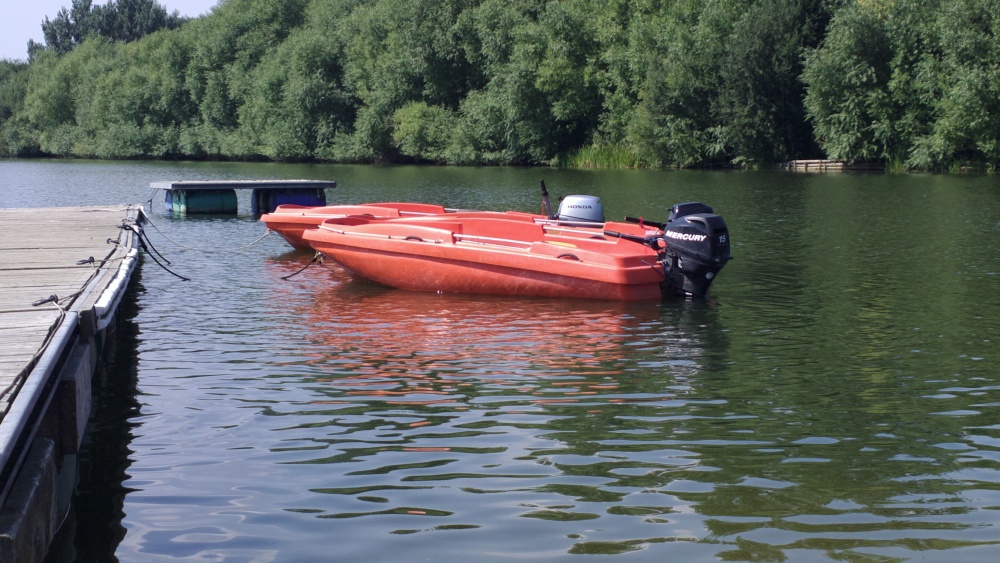 Pretty impressive, but what I wanted to investigate in this feature is what downsides the loss of oversampling has. In other words, every pixel in the zoomed shot stands on its own, essentially derived from a physical pixel in the sensor - there's no combination of pixel information to reduce noise and improve colour accuracy.

With that in mind, here are (slight blow-ups, in the unzoomed version's case) of the central regions of both the above photos, roughly matched in terms of framing so that we can compare recognisable details - the wording of the two engine brands are good for concentrating on. Obviously, the detail from the zoomed photo is the second one, beneath: 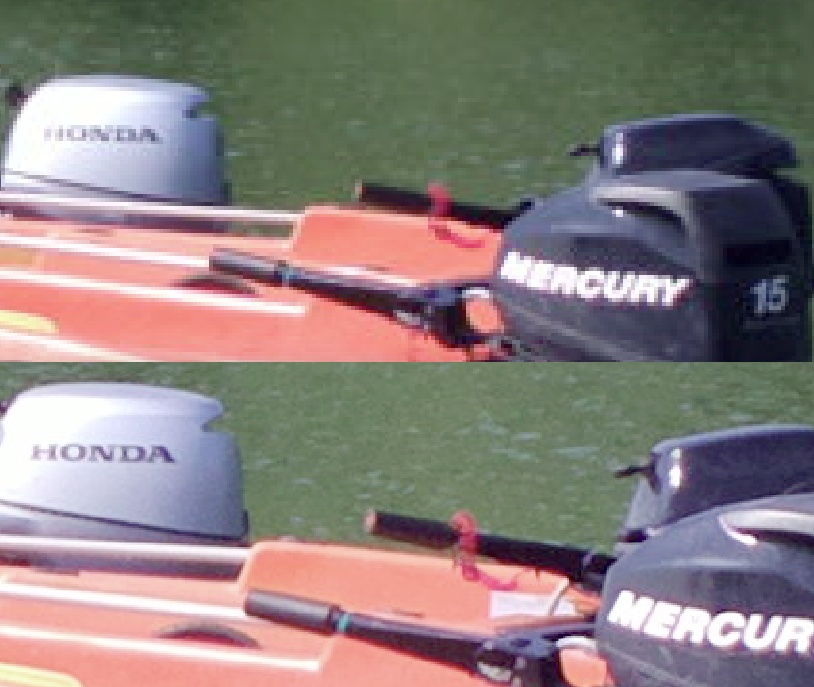 Quite a dramatic difference in detail, as you'd expect from the 2.5x zoom and, seemingly, with little downside under these conditions. There's so much light that there's no real danger of digital noise creeping in - though the 808's sensor at 1:1 like this does seem to mute colours just a little bit.

If you're out in good light then, there's little reason not to use the full PureView zoom if it means getting closer to a subject that you can't get closer to, physically.

But what about when light levels start to drop. Here's a typical scene at dusk, around sun down. Notice the boat in the middle of the frame: 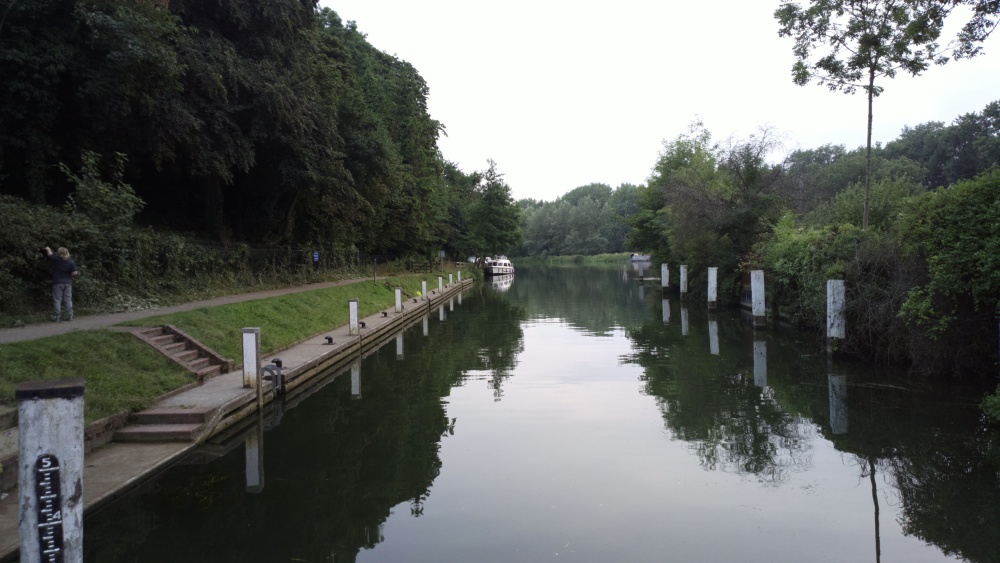 Again I took two photos, the unzoomed one above and one zoomed in by the full 2.5x factor. Again, let's take the central subject and crop/magnify in, to look at the distant boat in detail. Again, the crop from the unzoomed image is on top, the one from the zoomed image below: 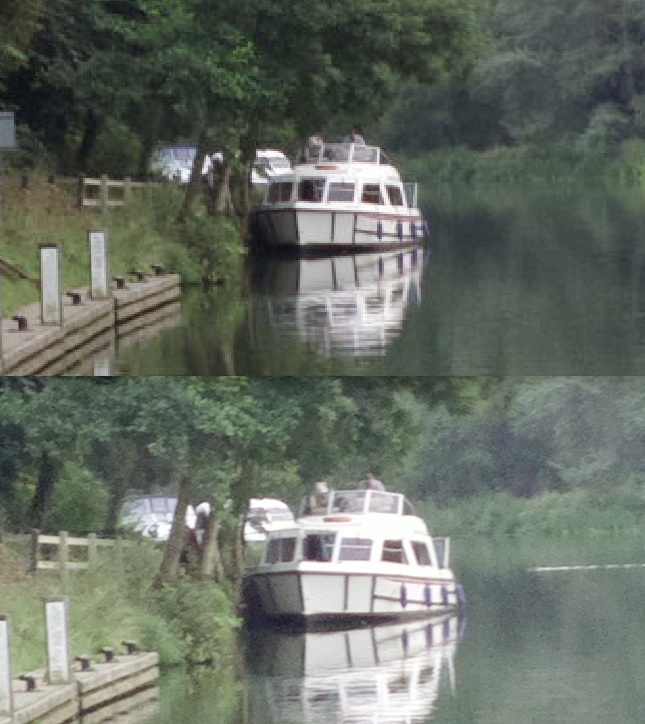 Things are less clear cut here. Yes, if you look closely, you can see more detail in the photo that was taken while zoomed. But there's now significant paleness in the colours in the zoomed image, plus definite digital noise creeping in. In contrast, the crop from the unzoomed image is richer, with more solid, believable colours and lower noise. The jury's out, overall, but it could well be argued that for a great photo you're best off not using the PureView zoom and simply accepting a less detailed but beautifully oversampled image...

To prove the data point above, I took a second photo a few minutes after - note that it was quite a bit dimmer than the photos make it seem. Here's the full cottage scene: 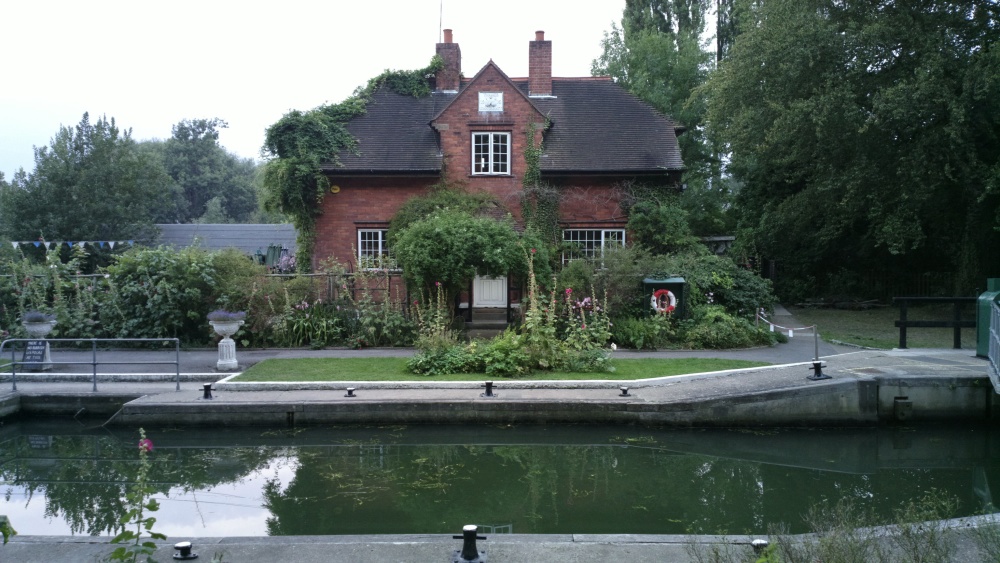 And again here are frame-adjusted crops from the centre of the unzoomed (top) and zoomed (below) images: 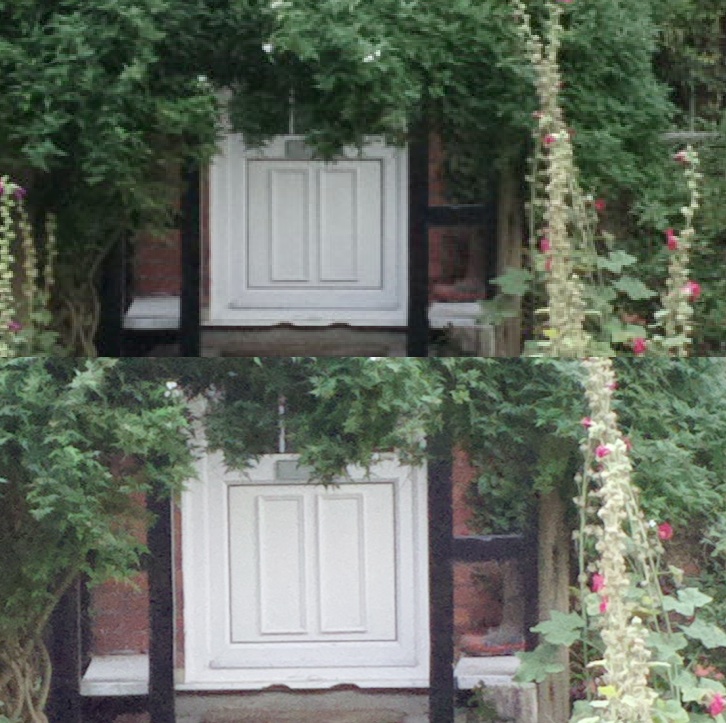 Again, there's a richness to the oversampled version - it's somewhat amazing that, despite 2.5x less actual resolved detail, I prefer the top, unzoomed version. It's painfully avident from looking at, for example, the black posts in the zoomed crop, that the lack of oversampling results, in this poor light, in fairly horrible noise and artefacts.

Note, by the way, that the zoomed image defects being highlighted here are still quite a way better than what every other smartphone camera would produce, attempting the same scene, probably armed with traditional 'lossy' digital zoom.

Finally, let's take things to extremes and look at a night scene: 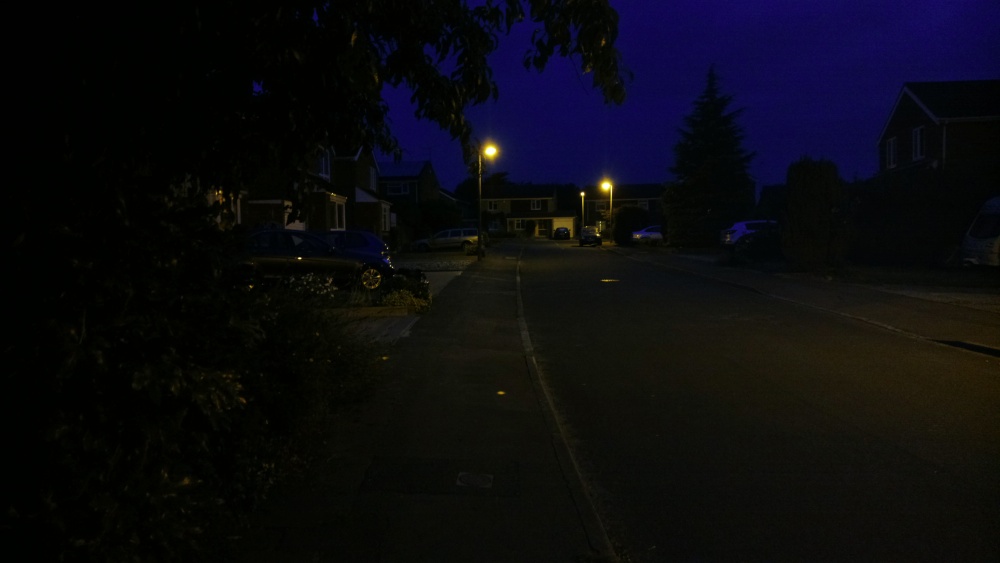 And again here are crops from the unzoomed/oversampled version (left) and the zoomed version (right): 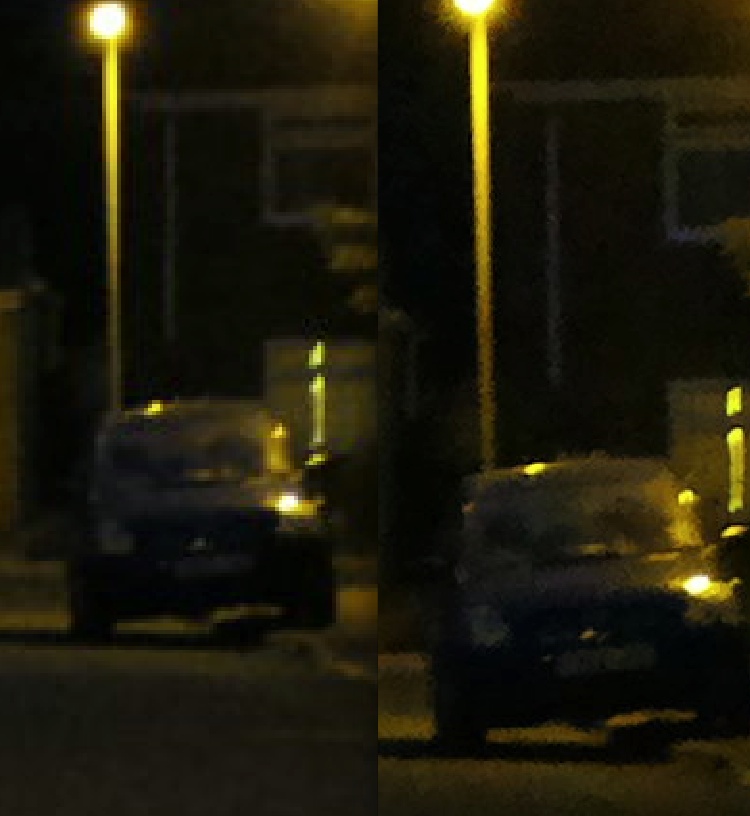 The noise and artefacts in the zoomed version are at this stage quite unpleasant, while the PureView oversampled, unzoomed crop maintains its dignity with some fairly solid areas of shade and very little digital noise, despite an almost complete absence of light. Truly, when light conditions get this bad, a photo needs a seven to one oversampling ratio, in order to cancel out the digital noise in the sensor.

It's worth codifying the advice given above, then:

What about in between, when you're outdoors and the light is murky, or when you're indoors and relying on artificial lighting or the 808's Xenon flash? The trick here is to use your own judgement. Note that I said above that you can stop the PureView zooming process on screen at any point by not swiping your finger all the way up or down. So, in fact, it's quite practical to shoot a 5MP photo with (say) 1.75x zoom and still a degree of oversampling (around three pixels into each 'superpixel'). So you can get a bit 'closer' and keep the digital noise down too.

As with everything in the photographic world, it's all about experimentation and the Nokia 808 is a great camera phone to try all this with. Let us know how you get on!

Filed: Home > Features > The 'ins and outs' of PureView zoom on the Nokia 808