Size matters - the quest for 'right' for a truly MOBILE mobile

It's true, I'm something of a rebel - you can count on me to disagree with the accepted wisdom of the rest of the smartphone world fairly often. Camera phones with real Xenon flash, for example. And I've mused on the trend towards ever-bigger phones before, but with CES 2013 now upon us and 5" and 6"-screened 'phones' now a reality, I find that I just can't stay silent. These monstrosities may well be 'phones' to the well-heeled twenty-something geeks, but to every day mums and dads, and to people who really are mobile, the size rather gets in the way. Having tried everything on the market, I'm convinced that the sweet spot for me is smaller. A lot smaller. 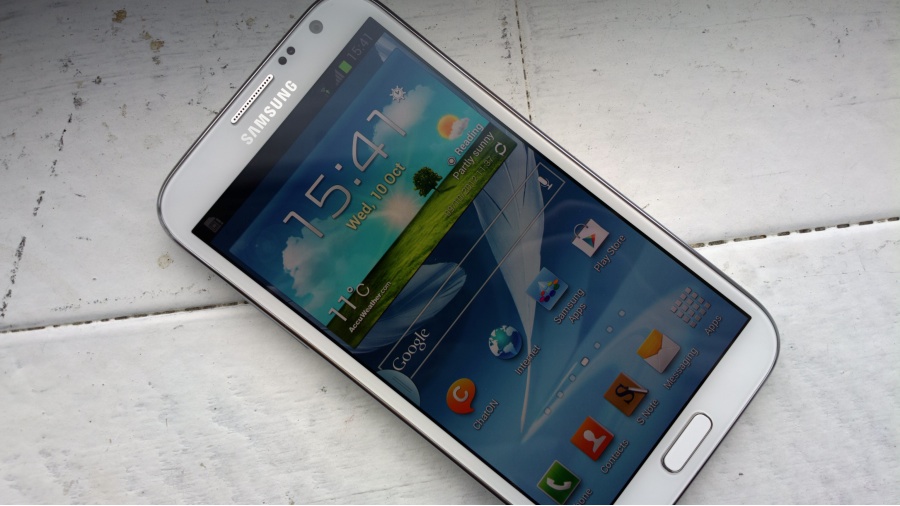 Having a large screen means better, clearer web browsing, more pleasant video watching and more immersive game playing. Absolutely. If those are the main attributes for your smartphone then go ahead and super-size. However, I contend that for many of us there are other attributes worth prizing.

As part of my role in The Phones Show, I get to review just about everything. In my role as contributor to All About Windows Phone, I've been using the Nokia Lumia 920, running Windows Phone 8, as my main smartphone for several weeks. It's done fairly well and, like the Galaxy Nexus and Note 2 before it in my pocket, fulfils most of what I want a smartphone to do. And yet it's too large to be practical once you get out and about.

It has been telling examining the array of smartphones on my desk and picking them all up in turn. The human hand hasn't changed its size much in the last millennia and so the 'optimum' size of handheld devices also shouldn't change. You may remember David's article here four months ago: Don't Supersize my Smartphone? Here's a quote:

The problem I couldn't overcome [with the Lumia 900] was that of reaching with my thumb. For example, reaching for the back button (in the lower left corner of the device's face) while holding the device in my right hand. My hand span is such that trying to cover the entire face of the Lumia 900 meant I had to perch the device atop my little finger while loosely supporting the back with the rest of my fingers. When gripping the phone properly there were areas, including the back button, that my thumb just couldn't reach.

This seemed to highlight the line that shouldn't be crossed; that is, when the user experiences physical discomfort or has to perform some sort of precarious articulation to use the phone single handed. That should be the measure of when a device is too big for someone. Conversely, if you have larger hands and you have to contort your thumb to reach the parts of the screen nearest to your hand, the device is too small for you.

A simple test to see if a phone fits your hand is if you can comfortably wrap your hand around the device and touch the tip of your thumb and middle finger without discomfort or dropping the phone.

Indeed. Try it on your own phone right now. On the Lumia 920 and Galaxy Nexus, it's a stretch for my thumb and middle finger to touch, on the Galaxy Note 2 it's harder still.

An uncomfortable grip means you're more likely to drop the phone, less likely to enjoy carrying it, and so on. For example, I've taken a lot of photos with the Lumia 920 over the Christmas period and I always felt I was having to manhandle something large and heavy. The Galaxy devices are even worse, as they're so light and thin that they're far too easy to drop, once you factor in taking calls, snapping quick photos, pausing music, while on the go, out with shopping, kids, chores, events, and getting into and out of cars, trains, and chairs. You get the idea...

Trying to keep a grip on a 6"-screened phone will be as bad as trying to carry a naked iPad or iPad mini along the street.... very stressful!

I then picked up my old Nokia N8 and N9 (standing in here for the Lumia 800, which wasn't available - the chassis are identical though), plus the brand new Motorola RAZR i. This was more like it. Genuinely phone-shaped - and phone-sized - devices. Hold one of them in one hand and there's an immediate sense of security: 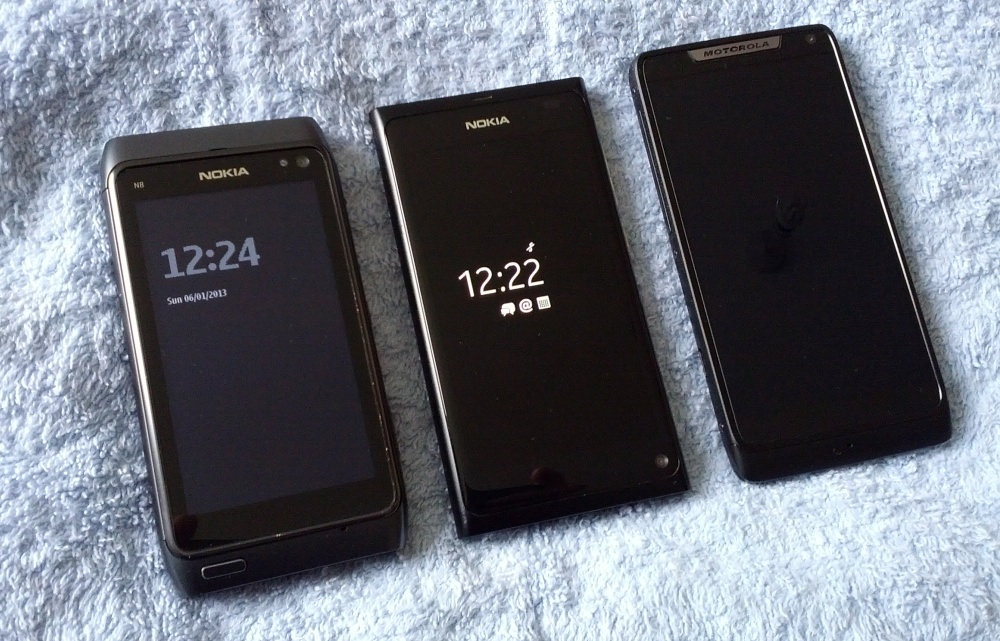 You see, if a smartphone is just a small tablet, we spend our lives molly-coddling it, making sure it doesn't get smashed up, using it with our heads down in a web article or video or game. If a smartphone's form factor, as above, is geared more for genuinely mobile, perhaps one-handed, slip-it-in-any-pocket use, then different atrributes come to the fore.

The N8 perhaps typifies this, with its biggest strengths in its camera (still just about [cough: 808] the best image capture in the world, with real flash), its audio output (via headphones, via speaker or by FM transmitter), its flexibility and expandability (microSD, mass memory, USB on the go, two ways to charge it, removable battery [cough - bring along a Torx T4!] and battery life in general). Note that none of these attributes really involve looking at the screen very much, meaning that the absolute size and resolution of the display are definitely deprecated.

In other words, such a smartphone gives you a specific subset of accepted '2013 smartphone features' while ensuring that you spend as much time as possible with your eyes looking up, as you cycle or trek or drive or simply do something with your family. No head stooped over a 5" 'phablet' reading through 2000 words articles like (ahem) this one....

What's also interesting, looking at the photo above, is that, despite almost identical overall dimensions, component improvement and miniaturisation has meant that better and larger displays could be fitted. The N8's 3.5" screen lacks the CBD polarisers, the N9's 3.9" screen has CBD (ditto the Lumia 800 with 3.7" version, leaving room for the Windows Phone control keys) and looks fabulous as a result, while the RAZR i (RAZR M in the USA) has a so-called 'edge to edge' screen and reduces the bezels still further, to squeeze in a 4.3" Super AMOLED display while only adding a couple of millimetres of height - rather impressive (I voted it my number one for this reason in Phones Show 189).

I've often talked on-air and in articles about there being a 'sweet spot' in terms of form factors. In Goldilocks terms, not too small and not too big. This sweet spot hasn't really changed much over the last five years - what's changed is that the amount manufacturers can cram into this sweet spot (N8/N9/Lumia 800/RAZR i form factor) has increased. 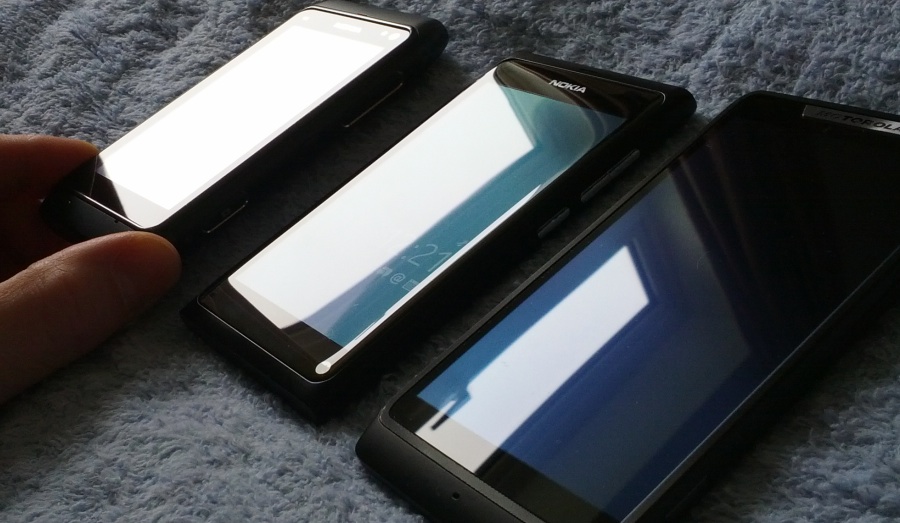 Again, I don't want to dismiss the delights of today's large screen superphones - they're truly impressive technological marvels. I just don't want one in my pocket or on my belt all the time. And, judging from comments by others on the team, I'm not alone. There is a perfect size for a phone once you get past the need to always be head-down in some video or game.

What of the current generation of smartphones? I've mentioned the RAZR i already - there's the Lumia 620, which looks nigh on perfect too. There's the Lumia 800, now dirt cheap and about to get its Windows Phone 7.8 upgrade. There's the Nokia 808 PureView and even 701, both of which are still strong contenders. Plus, of course, the Apple iPhone 5, which also fits the 'sweet spot' form factor perfectly.

Just don't give too much attention to the monsters from this week at CES. As Obi Wan Kenobi would say 'These aren't the phones you're looking for'....