What if?... The ultimate Symbian optimisation gains you up to 80MB of system disk

We've all thought it at one time or another. Faced with a Symbian smartphone which is coping, but not quite as lightning fast as when we first had it, faced with a system disk (C:) which is edging the wrong side of 50MB free, and feeling guilty for the dozens of freeware and trial applications you installed to try out (and then removed again), the temptation is to think "What would I gain in performance and resources if I were to factory reset and then sync my data back on?". Other valid questions are "Is it more efficient to completely re-lay the firmware rather than simply resetting?". And, most drastically, "if I were to perform (gulp) the emergency hard reset sequence to wipe C: completely, would I lose important modules and be up the proverbial creek without a paddle?" All of which I, hopefully, answer below, along with a healthy caveat or three!

Normally, the rule for smartphones, or indeed tech of any kind, is that "if it's working, don't 'fix' it". However, there are degrees of working and my trusty N8, after over a hundred pieces of review software had passed through it and after over the air updates to Anna and Belle and then Belle Refresh, was feeling a little 'crufty', as if the sheer number of odd little files and hooks in the OS were weighing it down. The final straw came with a couple of lockups, one of which needed a ten second power button press to resolve.

All of which made the N8 the perfect test vehicle for the questions above. I could give the N8 a sequence of ultimate optimising resets and, for the first time (to my knowledge), log the essential statistics of the device and provide a reference for others who might be asking some of the questions above.

Although there's an option to explicitly do this in the Settings menu, I've always used *#7370# from the dialler screen - old habits die hard. I believe the two are equivalent though. There's the usual warning from the OS about this also deleting all data on mass memory (E:) - back in the days of S60, *#7370# would just affect the system disk (C:), but with the Symbian^3 generation onwards there are system files on E: which need re-creating carefully and presumably it's deemed easier to just hard wipe E: and have done with it. Not a problem as long as you've backed up any media etc.

After the reset, which took around five minutes to complete, I had:

The extra RAM is expected because the widgets, wallpapers, theme and installed applications form my starting point will all have gone and each uses up a little RAM when in place, i.e. the Symbian OS knows about them and every pixel, every icon has to be accounted for and remembered.

An extra 29MB of system disk space is welcome, but I'd expected a lot more. Time to proceed to my next experiment...

The best thing to try if your over-the-air update has failed, and something I like to recommend as an easy operation to fix a multitude of sins, I plugged the N8 into Nokia Suite, went into 'Check for updates' and then opted to 'reinstall' the (v111.040.1511, Belle Refresh) firmware. A 303MB download started and fifteen minutes later, the N8 restarted, though there wasn't any discernible change from after the *#7370# procedure.

Rafe has always asserted that the two procedures should produce the same results and it seems that he's right. The full reinstall is obviously more bombproof, but on a correctly working phone the two operations are indeed equivalent and both leave an awful lot of application installs (Maps, Store, Qt patches and other runtimes) in place, in a protected area of disk C:

It's at this point that I had to start clutching at straws. What about the truly HARD reset, the one Nokia do NOT recommend, the one a service centre might employ as a last resort? The 'four-finger reset of doom' that completely wipes the system disk (C:) - what would that give me and did I have the courage to try it?

On the N8, the reset sequence is:

Following this sequence, the Symbian interface appears really quickly - not surprising as chunks of it have been radically pruned(!) And check out the new metrics:

As you can imagine, I almost fell off my chair when I saw the system disk statistic. The big question though is: what's missing and how much of the extra 140MB of space will be swallowed up when I restore the relevant applications?

I'd always thought that Qt was one of the components that got removed when one did a full hard reset, but it seems that Qt 4.8.0 is now baked into the Belle Refresh firmware (and thus loaded in Z:) - I did a Qtinfo check after the hard reset and it reported everything present and correct. In fact, an awful lot was present and correct, including all the stuff normally associated with modern Symbian, including the full array of homescreen widgets.

There were only three major software chunks missing:

So 40MB of that big C: disk increase has gone, but there's still an awful lot of the gain left.

There's one stage left to go through, of course. No, not installing my own choice of third party applications, that's a job for another day (and most of them will install to mass memory, hopefully), I'm talking about official 'Software Updates' from Nokia. Going into SW Update on the N8, I see:

Only the last of these had a component already in the OS, so I'm expecting another big hit on the system disk. I pressed ahead with the updates, which took around twenty minutes (the MS Apps one is by far the slowest).

By the way, it goes without saying that before assessing any of the metrics in this article, I did the appropriate device restarts - I'm nothing if not methodical! After the Software Updates, we arrive at our final vital stats for our 'ultimate optimised' Nokia N8:

Comparing these figures to the ones I started with, I can discount free RAM - that 5MB increase will soon be taken up by the usual installs and customisations. But I'm proud of the other two metrics. Here's proof of the system disk free space, on my fully configured N8 in working trim: 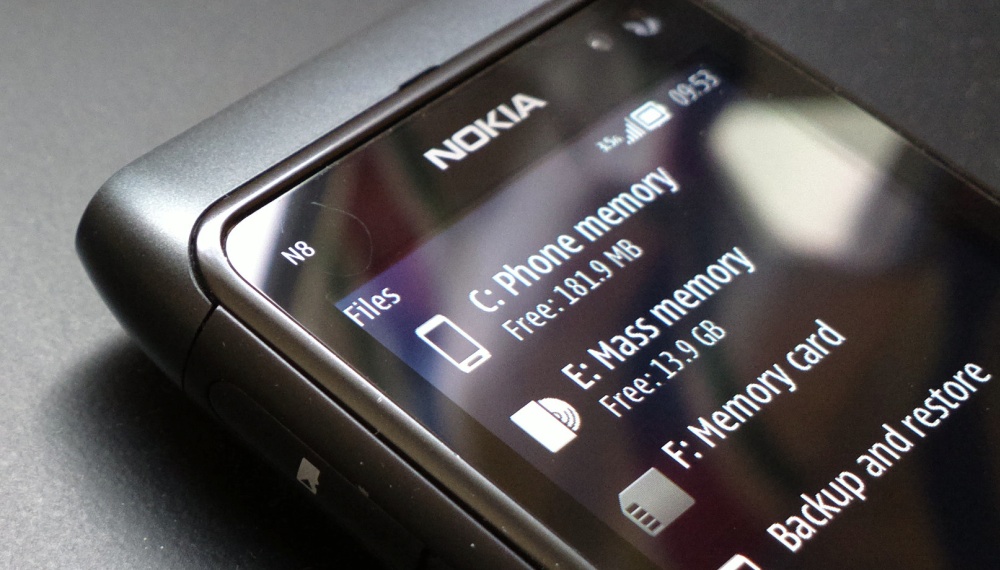 Around 80MB more system disk space is very definitely not to be sneezed at. Yes, in normal use, with a mailbox syncing in data, and with Web using part of disk C: for its cache, the figure will start going down again, but there's still a healthy increase here, I think.

The boot time will increase slightly too, no doubt, though because I was measuring time until the wallpaper/homescreen first showed, I wouldn't expect it to rise too much. As you add widgets and applications, the actual time until the homescreen becomes properly usable will of course go up further. A saving of eight seconds on boot time isn't significant in the grand scheme of things, but it does give further indication that two years of miscellaneous file and registry 'cruft' has been blasted away and that the Symbian OS is now as efficient as it can possibly be on the N8.

Note that I'm very definitely not advocating most AAS readers go through the same procedures above - in most cases, your Symbian smartphones are working just fine, so you'll be chasing 'diminishing returns', plus there were some items listed above which simply can't be replaced short of reflashing the device with the official sales package software using Phoenix. But if you've ever wondered what you'd gain (and what you'd lose) if you did go through any of this - well, now you know!

Comments welcome, as always. Could you face going through this? Do you need to?

Our usual disclaimer applies, of course. If you do play with hard resetting your phone, we take no responsibility for any loss of functionality you might run into! If you're not sure what you're doing then don't do it. Period.

Filed: Home > Features > What if?... The ultimate Symbian optimisation gains you up to 80MB of system disk