Drawing a line in the sand: N97 owners can have useable firmware or Qt - but not both!

Herewith a cautionary and hopefully interesting tale. I loved the possibilities of the Nokia N97 form factor, back in the day (2009). Huge swappable battery, FM transmitter, full QWERTY keyboard, transflective screen, camera lens cover, full-face touch, and so on. But the system disk and RAM size were problems, of course. Showstopping problems, as it turned out. So I've been experimenting with custom firmware for the N97 and it turns out that there's a big sting in the tail... followed by a real 'line in the sand' choice that, viewed askance, still ends moderately happily!

The idea, as I found when putting custom firmware (CFW) on my Nokia X6, was to replace the manufacturer-supplied operating system with a carefully selected set of modules and files that improved on what Nokia's firmware teams supplied. I've only ever done this with devices which are no longer being supplied by official updates and, as we hadn't seen firmware for the N97 for over a year, I thought it was fair game too.

In each case, firmwares were applied using the technique described here. My goal was to find a firmware that:

My investigations started with Phorepoc's 'CFW for N97 Classic', itself almost a year old, and things progressed very smoothly - everything worked, from Maps to the Store to Qt to the FM Transmitter, with a decent amount of system disk free - and then I spotted that the keymapping was set to a Greek N97 layout and that I couldn't enter full stops (periods)! There's definitely scope here for a killer firmware, though I enter full stops rather too much to live with this idiosyncrasy! 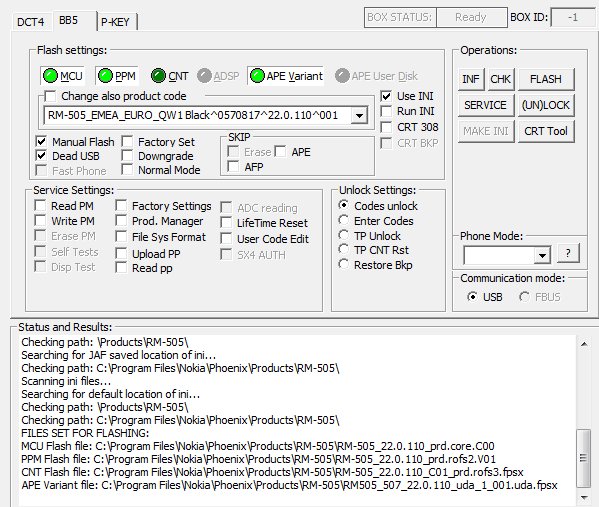 Next stop was to try the much-lauded IaguCool DarkStream 'C6-v2.2' firmware, reputed to be clean and efficient and also (unlike some other N97 firmwares) with the FM Transmitter working. Again the firmware went on smoothly, with Maps and the Store working fine. But the showstopper here was Qt. In rearranging things so that much of Qt installs on the mass memory (thus giving more system disk free), something's clearly been broken in what was already quite a complicated install chain. I tried the supplied IaguCool Qt binaries, which installed fine but then any Qt app I tried to install also wanted an extra 2MB download and install, which failed every single time. I tried the official Qt installs (via Nokia Store) and these also failed. Clearly something had changed between the modified Qt binaries being released and apps starting to demand something newer. I was stumped.

At this point, I had the idea to revert the N97 Classic back to stock firmware (v22, grabbed from Navifirm) and see just what the penalty of having latest, official Qt runtimes, MfE, etc. was. I was quite prepared to miss out Quickoffice editing (I rarely use this on the phone anyway) and to miss out on 'pleasures' like Gig Finder and 'Nokia Messaging'(!). In other words, with all Qt runtimes in place, with Maps and MfE and Store all in place and updated, just how much room would I have left on the N97 Classic's system disk?

I then started using MfE to collect email. Within ten minutes I was down to 3.3MB free on disk C. End of the line and only one step away from the OS crashing, of course. Time for a drastic rethink.

There was a point in time, around the end of 2009, when enough had been sorted out in software on the N97 that I reckoned it was just about the best all round smartphone in the world, with just a few small caveats. The window in time was quite short though, since:

Within a few months, the N97, every Symbian fan's geek toy, was all but unusable and un-recommendable. And has been the object of ridicule ever since, somewhat unfairly, since 90% of the N97 Classic was extremely worthy.

However, with my goals in place, and even with draconian avoidance of anything non-essential, I simply ran out of system disk in the first hour of use. At which point I can declare that the N97 Classic, even in geek hands (in this case, mine) simply can't function fully with modern Symbian apps. At all.

Time to axe one of my goals. Let's forget the requirement for Qt and 'modern' (i.e. 2011/2012 applications). Yes, I know, this will immediately disqualify the device in some peoples' eyes as a smartphone, but I'll disagree (as usual).

I went back to the IaguCool DarkStream 'C6-v2.2' firmware, this time determined to do everything but without touching Qt at all. The DarkStream firmware provided significant benefits, almost all of which work from the ROM and don't need much system disk use: 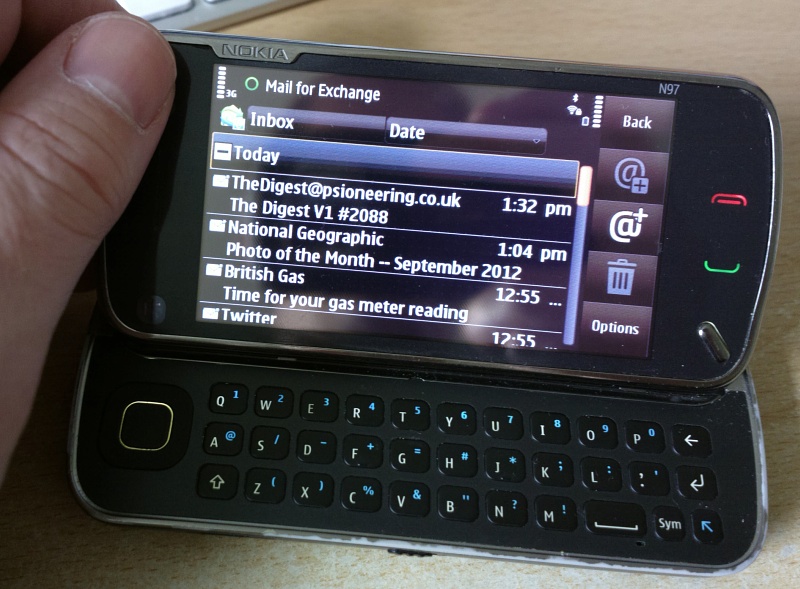 Essentially, in this configuration, anything marked in the Nokia Store with the infamous 'Note: You may be prompted during installation to download a large one-time update for your phone software' is Qt and is therefore a no-no.

Applications I did install include Opera Mini (for efficient web browsing), Gravity (for Twitter, Facebook and Google Reader), which works brilliantly with a qwerty-driven phone, and Skype (though this seems not to be available officially for the N97 anymore, so I sideloaded it from here.

The big takeaway from the above is that, without serious geek tinkering, the N97 Classic is now so far behind the cutting edge that it, quite literally, can't cope with the latest updates and runtimes - at all. Can there be anyone out there in 'normob' land still using the N97? With the deluge of semi-enforced updates from Nokia, the device is far too easily submerged.

However, the second takeaway is that the N97 Classic, now available for £70 or less second hand, can be flashed with custom firmware and the system disk space limitations effectively sidestepped - Maps 3.6 and Quickoffice and more are all in the Z: drive (firmware image). The downside, and it's arguably quite a big one, is that (in my experience) you have to do without Qt completely, which severely limits the choice of modern applications available.

Not that this stops me using the newly flashed N97 Classic afresh as my go-to backup, emergency 'smart' phone. Email, Social, Podcasts, Skype, all with the advantages of huge and flexible batteries, qwerty keyboard, microSD expansion, FM transmitter and more.

PS. Note that the Symbianize web site linked to above for DarkStream 'C6-v2.2' firmware is mainly in the native language of the Philippines - the free signup form will need you to brush up your Google Translate skills 8-)

Filed: Home > Features > Drawing a line in the sand: N97 owners can have useable firmware or Qt - but not both!