We've covered the Nokia 808 PureView in some depth here on All About Symbian this week, reporting on the announcement and answering the most common questions. But, on the basis that a picture is worth a thousand words, I wanted to illustrate the single biggest aspect of Nokia's breakthrough in terms of how camera phones (and indeed cameras) can now work. Never mind the zooming, never mind being able to take 38 megapixel images, here's the real reason why PureView on the 808 is special.

The numbers behind the Nokia 808 PureView do boggle the mind. Or at least they should. The populist tech media has leapt up on the '41 Megapixel' figure and generally either misunderstood why it needs to be so high or questioned whether it's real in the first place. Yet that stat is only incidental in the bigger story.

After all, noone wants 38 megapixel images at 10MB each from a phone camera. What we all want are better pictures at standard, more manageable resolutions. E.g. 5 megapixels. Now, light being everything, especially when it's gloomy or dark or artificially lit, we want to gather as much of it as possible. So that means a large aperture and a large sensor. And, down at sensor level, it means having large pixels - large enough to eliminate photon quantisation effects, i.e. to eliminate random digital noise.

The Apple iPhone 4S's 8 megapixel sensor is 1/3.2" optical format and the pixels are 1.4 microns each (a micron is a millionth of a metre). Shown on the diagram below, in green, is a representation of the size of iPhone 4S pixel. Remember that the iPhone 4S is widely regarded (rightly) as having an excellent camera for general purpose use. Next to this is a light circle, the same size - this is the same 1.4 micron pixel on the new Nokia 808 PureView. For reference, the light blue circle overlaid is the 1.75 micron pixel from the Nokia N8, previously thought to be the best camera smartphone in the world - slightly larger and so will gather more light, etc. But only slightly. 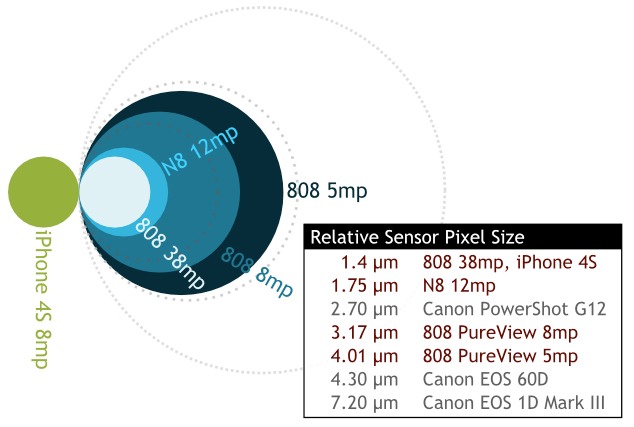 (diagram produced in conjunction with a colleague, @mjjagpal on Twitter)

So the N8 gathers slightly more light per pixel, explaining (along with the Xenon flash) why it takes slightly better photos than the iPhone 4S when the going gets tough.

Now consider PureView, this new system from Nokia. With so many 1.4 micron pixels to play with, if the user wants to create an 8 megapixel image (e.g. to match the iPhone 4S's resolution), there's roughly five physical pixels worth of information for every one PureView 'virtual pixel'. Meaning* that the latter's light gathering ability is equivalent to a single pixel of area roughly five times that of the 1.4 micron one.

* Note that I'm simplifying horribly - in reality there's overlap between virtual pixel light gathering areas, plus I'm sure Nokia's algorithms are very sophisticated here. I've heard figures of 7 and 8 quoted as the number of pixels whose information goes to making up the RGB 'values' assigned to the 'virtual pixel'.

And so we have the mid-blue circle above, the approximate size of the PureView virtual pixel in the Nokia 808 - compare its size with that of the N8's and the iPhone 4S's. That's a dramatic difference and is the concept that many people are not appreciating.

In fact, take the PureView concept to its default setting - 5 megapixels - a photo resolution which has long been the sweet spot for consumer photos (ever since the Nokia N95, back in 2007), and do the maths, and you end up with the virtual pixel size shown in dark blue above. Put simply, when you're at a gig or evening event or sunset or indoors in an office, whenever light levels are low, the 808's enormous PureView virtual pixels will gather far more light, up to ten times more, than competing phone cameras. (And note that this is without even considering help from the double-strength Xenon flash.)

Add in the way random digital noise can be almost completely cancelled out because of the oversampling/averaging and you end up with 5 megapixel photos from a phone camera that are virtually perfect every time. No noise, no blotchy areas, no colour aberrations, no speckles.

﻿﻿That's the point of PureView. Not the high megapixel number. Not even the startling innovative lossless zoom.

Steve Litchfield, All About Symbian, 1 March 2012

PS. Also in the diagram, for comparison purposes, using dotted lines, are a handful of professional Canon cameras, showing physical pixel sizes for each. Comments welcome, but with the Nokia 808 PureView I think we can safely say that camera convergence into a mobile phone is, essentially, done.