Another in my little series of tech highlights (previously: BL-5K differences and EDoF gen2), ahead of my full review of the Nokia 701. This time looking at the display change for the 701, compared to the C7. The latter used the same AMOLED display as the N8, albeit hidden a little behind a slightly mirrored oleophobic coating, whereas the new 701 uses an IPS (In Plane Switching) LCD, similar to that introduced by Apple for the iPad and iPhone 4, plus Nokia's CBD system. How do the two displays compare in differing light conditions?

I should add that it's likely that Nokia decided to use IPS LCD for the 701's display because of cost and supply reasons, rather than technical ones. After all, Samsung make most of the AMOLED screens found in Nokia phones and it must be galling to be dependent on the company's biggest competitor.

In other words, the switch was almost certainly not primarily to make the phone more useable, per se. However, with one caveat, the IPS display does have a couple of big advantages:

The caveat - of course - is that once you go AMOLED it's quite hard to go back to more traditional screen technologies (like LCD). The richness of AMOLED colours, the blacker-than-black blacks, all are quite addictive. Yes, I got used to the Nokia 701 screen for the reasons stated on this page, but if I was offered the choice I think I'd still go for the AMOLED screen - it's something you come to love....! 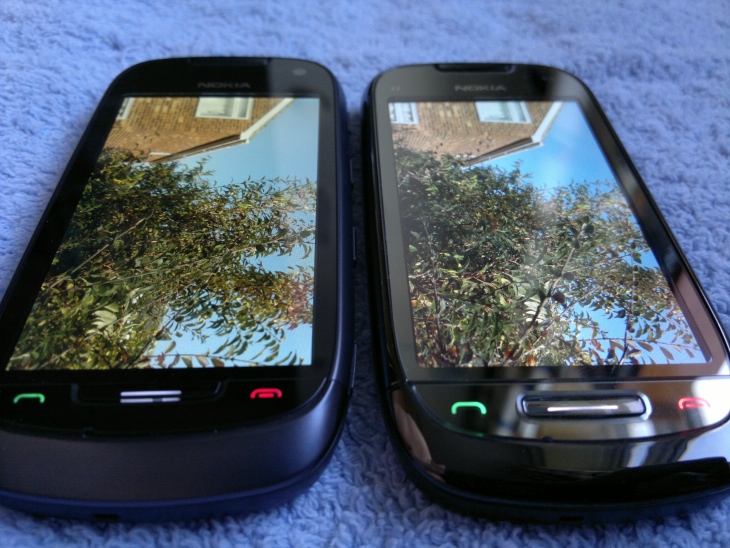 All of which means that you'll be wanting to see how the two screen technologies fare in different light conditions, in photo evidence form, everything else being equal. I took a bright, colourful photo and loaded it in Photos/Gallery on the Nokia 701 and C7, in each case making sure the screen was at full brightness and also splaying the 4:3 photo to fill the screen. One variable I could do nothing about was the phones' own internal display auto-brightness, which is set by Nokia.

The photo above was taken in average light, indoors, near a window. Typical office or home conditions, perhaps even equal to a cloudy day outdoors. You can see that the 701's IPS/CBD display is noticeably brighter than the C7's. But let's look at the displays head on, in case viewing angles are to blame here: 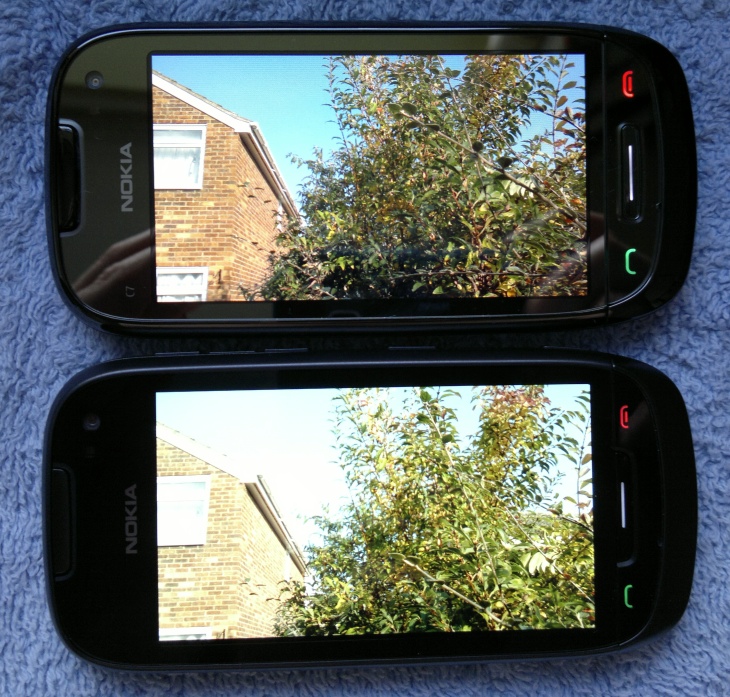 Don't get too hung up on the 701's display looking overblown - that's simply my N8's camera not being able to handle the brightness being displayed - the screen looked fine in practice. Having said that, the slightly dimmer AMOLED display on the C7 did show richer colours, as you'd expect, and the sky was definitely bluer and more attractive.

What about when it's very dark? 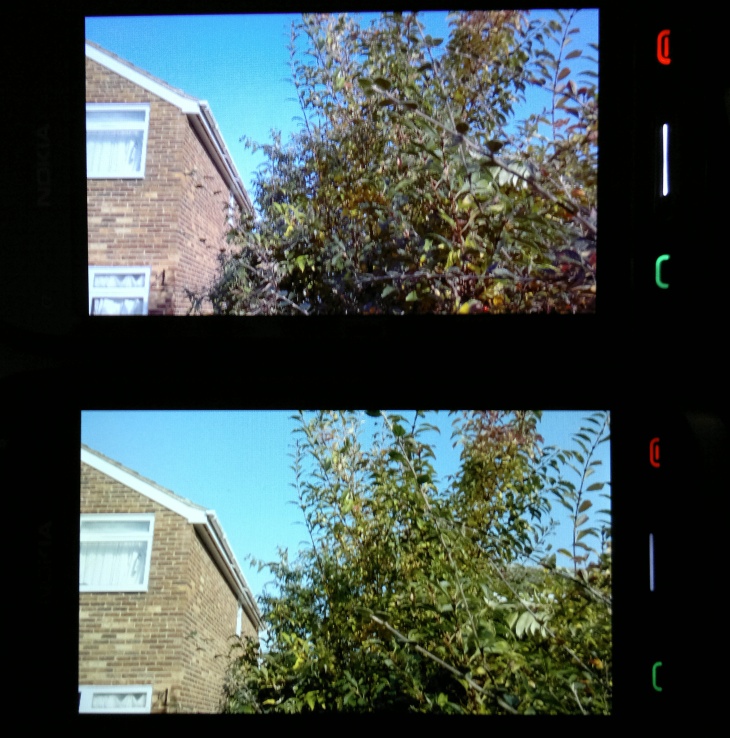 Interestingly, the auto-brightness in the 701 is tuned slightly differently to the C7 and they both end up at about the same brightness level. And, indeed, you can see for yourself how the AMOLED screen (top) wins out in terms of colours - I'm not entirely sure that the sky was that shade of blue in real life, but it certainly looks great. AMOLED for the win in the dark then.

Let's take the two smartphones outdoors into the sun. Weak winter sun in my case, in the UK, but still direct sunlight: 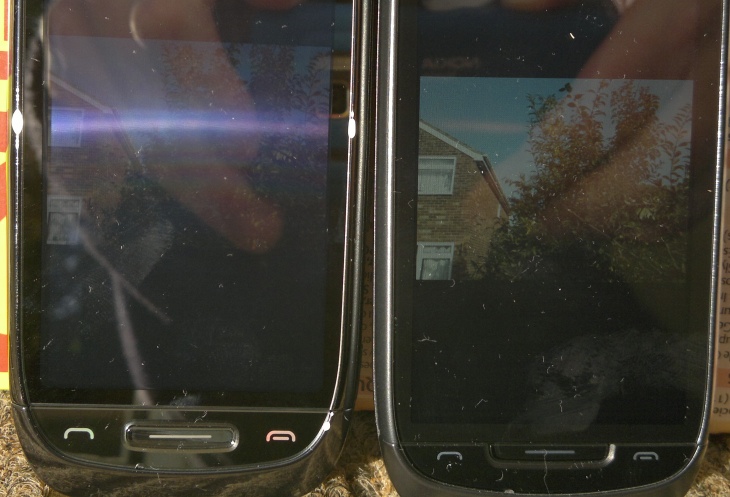 Here you can see that the C7's AMOLED display is dominated by the reflection of my hands holding the N8 taking the photo, whereas the 701's IPS/CBD display remains surprisingly clear, with only a hint of sunny reflection.

The six million dollar question is either how would the C7 have coped if its AMOLED display had also had CBD, or how would the 701 have coped if its IPS display wasn't helped by CBD? I suspect that the sun test would have shown both to be on a par with each other. In other words, AMOLED trumps IPS (because of the richer colours) given an equal amount of CBD polariser help.

But I really wouldn't worry too much if you're thinking of buying the Nokia 701 - the difference in colour renditions isn't that large and indeed Rafe is on record as saying he didn't really notice it didn't have AMOLED at first. And you can console yourself with the knowledge that many 'white' apps will now run using far less power drain and that the CBD will mean you're still communicating and navigating even when the sun's at its zenith.

So, three tech pieces down, just the full Nokia 701 review to go... watch this space, I'll have it up very early next week.