How to: Nokia Social and the march into 2011

One of the challenges of the 2010 and 2011 smartphone is that being online is not just about email and web anymore. There's a complete social awareness of what your friends and family are up to, of breaking news, with complete interactivity in terms of everybody commenting on, and replying to, each other's updates. Plus these social networks have their own 'Inbox', meaning that for many people the social environment is their primary online interaction. Up until now, social on Symbian has largely meant third party apps and clunky widgets. But on top of Symbian^3 on their new devices, Nokia has implemented some fairly comprehensive social networking integration. Let me walk you through how it works, while David reports with some more background from a chat he had at Nokia World with the Social team.

Up until now (read for S60 3rd Edition and S60 5th Edition), social networking on a Symbian phone has meant fiddling around. Either with the mobile version of the relevant service's web site, with a slow and clunky widget (if you're lucky) or with a third party Symbian-native client (if you're very lucky). Yes, Gravity will pop Twitter updates onto an N97-style homescreen and yes, the RAM-hungry Facebook widget can pop up the same for its updates, but it's all a bit patchy, to be honest.

Faced with a new generation of Symbian^3 phones, this was an ideal time for Nokia to step in and solve the problem - for now at least. And, in my opinion, they've done a pretty good job. One small disclosure is that the screenshots here were taken via Nokia's Remote Device Access and so, although they're all done on a real device, I wasn't able to accurately judge how fast or smooth operations will be on the real thing, with final firmware. Still, it'll give you a good idea of how the new solution hangs together.

Finally, after my visual walk through, David Gilson's got a brief report from the Nokia Social team itself, following his chat at Nokia World 2010, with some extra insights, so keep reading for that.

One prerequisite is that you've already synced in (via SIM, desktop, cloud, Exchange, Ovi, whatever) your contacts. You can proceed with social set up first, but one of the things it's going to try and do is find matches between what's on your social networks and what's already on your phone - so do yourself a favour and get Contacts sorted first.

Notice the 'Connect to your social networks' widget on the default homescreen. Tap this to get started.

Nokia's Social utility insists on you signing into Ovi before you can do anything else. This is partly so that Nokia can keep track of your logins to various networks, for easy set up of a new device, but it's also so that Nokia can provide you with application updates (to the client and, e.g. new 'communities') through the Ovi Store servers.

As you can see from the screenshots, the Twitter interface is clear and well laid out, more or less everything an average Twitter user might need. Tapping any tweet brings up appropriate contextual options, including 'Reply', as shown here.

Returning to the homescreen on the N8, as you can see here, the Social widget is now 'live' and pushing updates, including the appropriate picture thumbnail for that contact. Tapping on the arrows moves through your timeline, as you might expect, though it's obviously far too fiddly to view more than a handful of (abbreviated) tweets or updates in this way. Tapping the widget centrally brings up full timelines in Social (see below).

For now, though, it's back to the Social home page and time to add another social network to the system. In this case, Facebook...

Again, it's just a matter of entering your credentials and the big 'f' now appears, logged in, on your Nokia Social home page. Tapping on the Facebook line brings up:

All in all, a pretty decent Facebook client, with all the usual options you'd expect. As mentioned above, it's difficult to gauge performance over the remote access system, we'll have to wait for a physical retail device to judge this.

Now, the whole point of having a social network manager is that your updates can be tightly integrated, so that you don't have to think all the time about 'having to be in Twitter' or 'having to be in Facebook'. This is what the 'All activity' view gets you, shown here:

So you can see (in this case) Twitter and Facebook updates happily intermingled and you can reply to each as needed, directly. The big 'Update status' button at the top of this view, as you might expect, lets you post a status update or random thought of your own to all the communities you're logged into. As proof, here's my new update showing up in my Facebook updates page:

Now, another important aspect of Nokia Social is the integration with Contacts. The screens below show a trivial case, an empty N8 with just Rafe in my contacts book. When you set up each community, a Friend search runs to try and find matches between contacts in those communities and names in your main Contacts store:

Check the matches you think are valid and the search wizard does the rest, inserting a new 'Social' panel in the appropriate contact record.

Tapping on the button brings up the latest update for that contact on each of your social communities, along with when they were posted. There's the (convenient) option to send a message through each service too, though it's not yet clear how a reply to you will be highlighted on the N8, other than in the community clients. We'll have more experience of this when retail devices/firmware ship, of course.

Tapping on 'More' in one of the Social panes in a contact record brings up the choice of viewing the contact's profile on that service/community, plus the ability to grab the assigned online photo and use that as the thumbnail for this person in your local phone Contacts, as shown above.

Shown here are the profile details, in this case for Rafe on Twitter, showing his tweets and basic stats. Also available from the Social panes in a Contacts record are shortcuts to send email/direct messages via each service straight to that user's social account. For example, here I'm sending Rafe a Facebook email directly from my N8 Contacts store:

There's more to Nokia Social , of course, as hinted by David below, but to really get a sense for how useful (or limited) it is in real life, we'll need to use it on real handsets for day to day communication.

One big question is whether Nokia will 'back-port' any of this functionality to Symbian^1 (S60 5th Edition) as either an add-on or firmware update for popular devices like the 5800, N97 mini and X6. There are no technical obstacles that I can see, given that most of Nokia Social is built on the Ovi Store (itself currently floating high on a new version for Symbian^3) and Web Runtime code, but it's fair to say that an awful lot of work might be involved in such a porting exercise for comparatively little gain. After all, S60 5th Edition already has a number of excellent Twitter clients that'll run far faster than Nokia Social on the older hardware and OS, plus a number of useful ways to interact with Facebook too.

Your comments welcomed, of course. Especially if you're a developer with a prototype Nokia N8 and have had a chance to see how slick (or not) all this is for yourself.

While at Nokia World, I was given an in-depth demonstration of Nokia Social. There are a few features I'd like to see included, but overall it has a comprehensive set of features for a version 1.0 application. Reassuringly, Nokia Social appeared to be running very smoothly on the demo C7, despite being in a poor WiFi environment. Nokia Social requires the user to have an Ovi account, for storing login tokens for each of their social networks. However, one's Ovi account does not remember contact list associations. Therefore, if a user has to hard reset their device, they will have to re-associate their contacts with their social network friends.

The integration of social networking elements with personal information management (PIM) is one of the most interesting aspects of Nokia Social - at least for a productivity geek like myself. With Nokia Social, the user can pull data from (e.g.) Facebook, into both their calendar and their contacts list. For example, one can pull a friend's profile picture and add it to the corresponding contact. Similarly, they can add a Facebook event to the phone's calendar. Sensibly, they've taken a conservative approach by not trying to synchronise this data. Rather, a user selects to inject a copy of the data from the social network into their phone's local PIM storage. When asked, I was given the impression that proper synchronisation might be on the roadmap, but don't expect to see it any time soon. 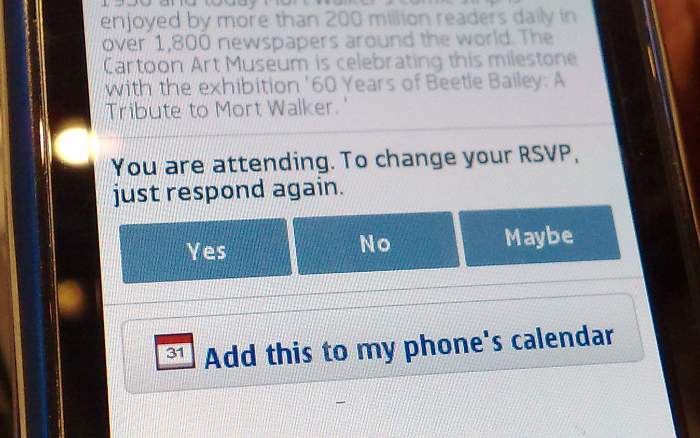 Multimedia is also supported, photos and videos can be uploaded directly to Facebook. Image upload is available for Twitter, via Twitpic, but there's no support for corresponding video services like TwitVid or YouTube. There are menu options to upload content from within the application, and users can choose to post existing content from the gallery or have Nokia Social launch the camera application. 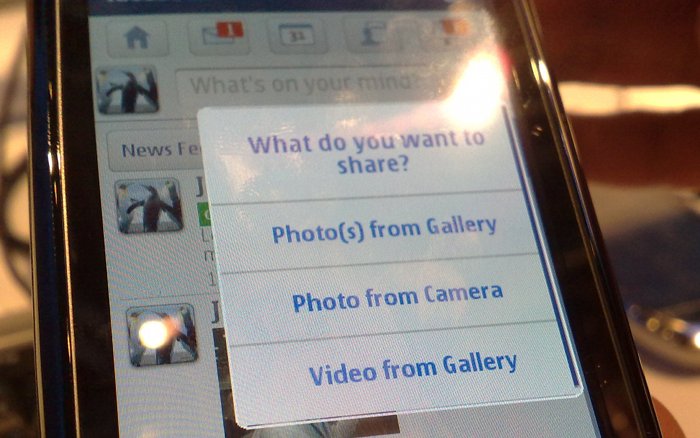 In the near future, Nokia Social will also support location check-ins - the new version of Ovi Maps shown to me on the C7 has a front-page icon for doing this. So far, check-ins only support Facebook. When I viewed the location post on Facebook, it was just the same as one gets when using the Share Location feature on the current version (3.04) of Ovi Maps. 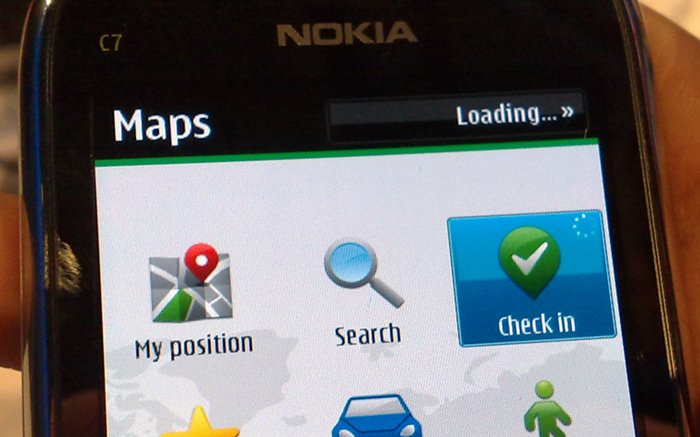 Overall, Nokia Social looks impressive for such a new application and is a significant added-value feature for Symbian^3. We'll be field testing as soon as we get some Symbian^3 devices.

David Gilson for All About Symbian, 27th September 2010