No, this isn't a phone. It's not even a 'communicator' in the purest sense, since the LTE version hasn't appeared yet. But the Surface Go is a half way house between a smartphone and a full-on laptop or even a 'Pro' hybrid. Paired with a phone (to provide mobile bandwidth), the Surface Go is quite a lot of computing power and familiar interface in a surprisingly small and light package, offering something different from traditional Macbooks, laptops, even Chromebooks now, and letting you bring the power of a traditional Windows PC everywhere you go.

I appreciate that I'm a little late to the party on this - the Surface Go has been available for a couple of months already in many markets. It's been on my radar to test out since launch, but, not being Windows 'phone' related, wasn't top of my to-do list for AAWP specifically. However, the run up to Christmas looks to be quiet on the phone front (especially so in the Windows world!), so it's time to see how the Surface Go copes with a typical daily workload. Could it be your perfect mobile PC solution?

Here's our opening gallery and first impressions anyway, the full multi-part review will be along once I've got some 'Go' miles under my belt! By the way, in terms of product links, try Microsoft UK and Amazon UK.

As usual with our galleries, click images to expand them and see any comments: 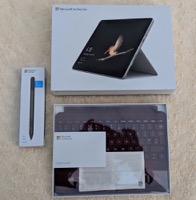 The review Surface Go bundle, helpfully including the Pen... Not everyone will need this, but surely all will need the Type Cover, I really don't see why this is bundled, with a £50 (say) bump in price. 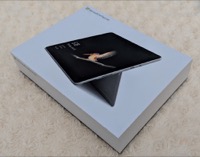 The Surface Go itself, here in 8GB RAM, 128GB SSD form, which is probably the best option if you want to do anything serious on the computer. 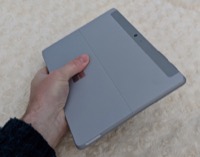 Here without the Type Cover, the Surface Go is just so light, belying its complexity under the hood. It's just half a kilogramme, barely more than twice a flagship smartphone. The Type Cover brings this up by 50%, to 0.75kg, but it's still around half as much again lighter than the Surface Pro line.

Neatly closed up. The Surface Go is made from magnesium, partly explaining the low weight. Note the coated plastic top section, necessary for the various Wi-fi and Bluetooth antennae. And for the LTE antennae once a LTE variant is made.

Along the top are power and volume buttons, though you don't have to use them very often, since a keyboard press will often wake the Go and since volume adjustment can also be done using the Type Cover function keys.

The utterly amazing variable angle hinge, a modern day mechanical marvel. Essentially, the kickstand can be at any angle, including almost flat back, akin to the much bigger Surface Studio.

Hidden under the kickstand is this microSD slot, usually for keeping large media files and reference material. You'll find a use for it somehow, and microSD cards are now incredibly cheap.

On the Go's right hand side, from left to right, the Surface charging port (proprietary), USB Type C (which can also charge the device) and a welcome 3.5mm audio jack (not always a given in 2018).

The snap-on (with magnets) Alcantara (Burgundy) Type Cover, which looks and feels super-premium. Obviously, it's physically smaller than the Type Covers for the main Surface Pro line, to match the form factor of the Go itself.

The feel of the keys is first class. Qwertyuiop dimension is slightly smaller (10%) than on a traditional Type Cover or Desktop/laptop keyboard, but surprisingly useful once your fingers have 'recalibrated'. There's a full complement of keys, too, with almost the exact same layout as the other Surface devices - just 10% smaller!

The 'Precision trackpad' is AMAZING. It's coated glass, it's large, and it's a pleasure to use. In fact, it's so good that half the time I find myself using it in preference to the Go's touchscreen. The Go's Type Covers are over £100 on their own, but after using this trackpad I can see exactly where the purchase price is going.

Up top are the magnets and pogo pins to hook up to the Surface Go. Note also all the function keys, with screen brightness, media play/pause, volume control, keyboard backlight, plus the usual text editing functions. 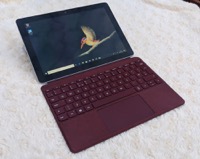 The Type Cover finally connected to the Go, here reclined with its flexible kickstand. When the Surface concept was unveiled, I was sceptical about advantages over a traditional laptop, but once I'd thrown around first a Surface Pro and then the super-light Go, and experimented with a myriad ways to use them, I find myself a convert.

The ability to recline so far is actually transformative, in many ways, not least because the Go becomes more 'lappable' than the larger Surface Pros and definitely more than traditional laptops, for which the screen can only go 'back' so far, and often not enough for cramped train or plane seats. 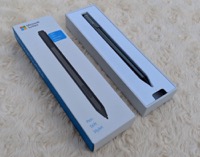 The Surface Pen was bundled with the review Surface Go, it's another £100 but if you need it then well, you need it. Although I'm no artist, I couldn't resist giving it a whirl in my first 24 hours and can confirm how well made it is.

The tip allows for 4096 levels of pressure and tilt (through to a painting application), plus there's a configurable button. I'll have more on this in a future review part.

When activated, a little green LED flashes near the 'eraser' end of the Surface Pen.

Attempting an arty shot of the nib! It's higher tech than it looks and the feel in the hand when sketching is astonishing.

Paint 3D can be a bit daunting at first, but it's actually very powerful - here my wife is just getting started. Again, more on this in a future review part!

Several people have asked about the Type Cover in low light - there are three levels of keyboard backlight, this is the middle level - and all keys seem to have their own LED, so lighting is even. As you'd expect with such premium hardware.

Although the Go is aimed at numerous market segments, not least the family and education (explaining some of the RAM/storage variants), most AAWP readers will be interested to see how this new super-portable QWERTY-enabled tablet performs on the road - tethered to your Windows, iOS or Android smartphone, this has the potential to give you the power of a Windows PC in not much more than the bulk of an A5 sketchpad.

Future review parts here on AAWP will cover the hardware design, specification spread and use cases, and much more.