They had me at 'temporal noise reduction'. Phone imaging through the ages...

There's a good write up here of a keynote talk by DxOMark's CEO and CTO, Frederic Guichard, in which he takes attendees through the history of smartphone cameras, in special comparison to DSLR quality, showing how increasing sensor sizes, apertures, resolutions, and software tricks, all combine to get very close indeed to standalone cameras. Aside from general interest, the Lumia 1020 gets a starring spot, thus proving that DxOMark weren't always anti-Lumia/Nokia (they refused to review the Lumia 950 back in 2015). 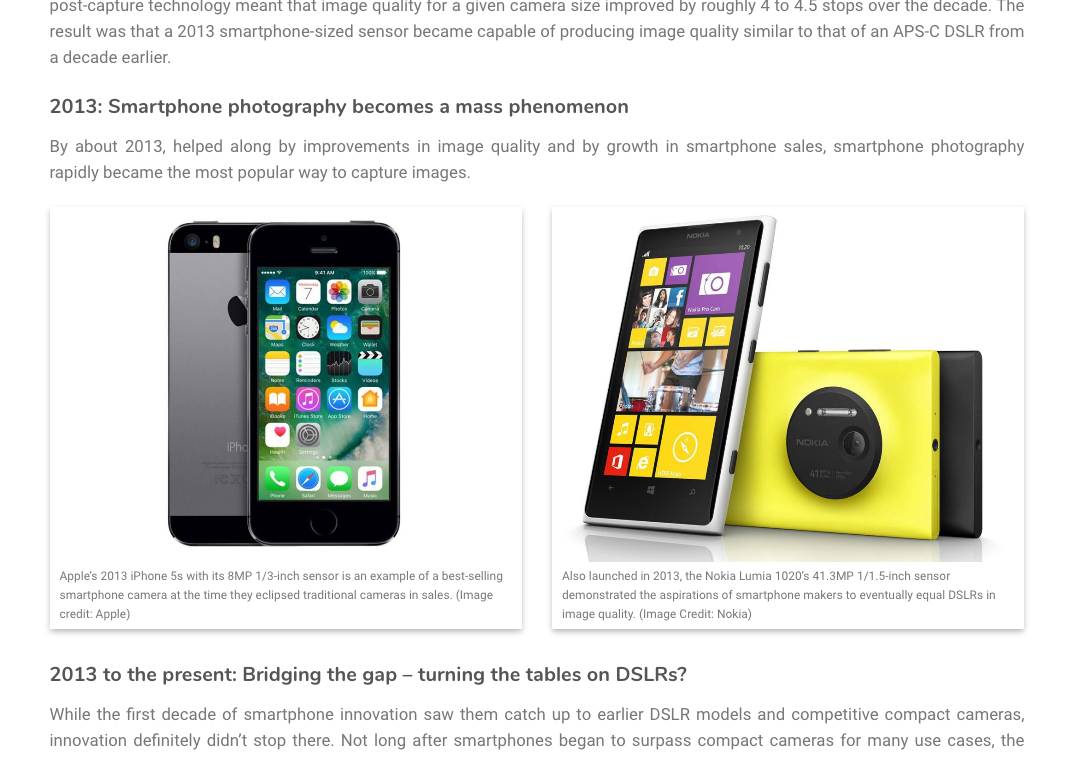 From the article's conclusion, commenting on how smartphone cameras automate so much that the main role left for DSLRs is in creativity:

We have seen how advances in technology have helped smartphone cameras surpass compact cameras in image quality and many other capabilities over the course of their first decade, despite their small size. In their second decade, taking advantage of their unique computational imaging capabilities, they have begun to push past even DSLRs in many areas, including automatic image enhancement and organization. However, that automation also makes smartphone cameras harder to predict, and difficult to rely on for repeatable results— leaving a market role for more-traditional digital cameras.

The landscape photographer Ansel Adams once said,  “There are always two people in every picture: the photographer and the viewer.”

As Guichard sees it, photographic technology  will eclipse the role of the photographer for many, but not for all, photographers:

“Smartphones have already completely automated photography. The next logical step is to automate the photographer. This is good: people can enjoy a personal digital photographer to capture their memories. But there will always be those who would rather have a trustworthy tool to tell their own stories.”

While smartphones are increasingly good at painlessly capturing memories, and even turning them into shared experiences, some photographers will always want to tell their own stories and keep creative control of their images. Standalone digital cameras such as DSLRs, mirrorless, and of course larger formats allow them to do that. So, at least for the indefinite future, they have a place in the hearts and minds of many.

You can read the whole (lengthy, allow 20 minutes minimum for reading) piece here.

I would comment that most smartphone cameras have 'Pro' modes, or even if not, have a way to manually adjust exposure with an on-screen slider after tapping for focus. So many of the DSLR 'creative' examples could be closely mimicked with a little skill by the phone user too.

Filed: Home > Flow > They had me at 'temporal noise reduction'. Phone imaging through the ages...