The science behind PureView oversampling in the 808 (and Lumia 1020)

It's easy to see how we could all have missed this, from a year ago, but at the International Image Sensor Society's annual conference Juha Alakarhu, Samu Koskinen and Eero Tuulos, all from Nokia (at the time) presented a detailed paper about the raw science behind 'oversampling' and its benefits. See below for more - it's fascinating stuff! 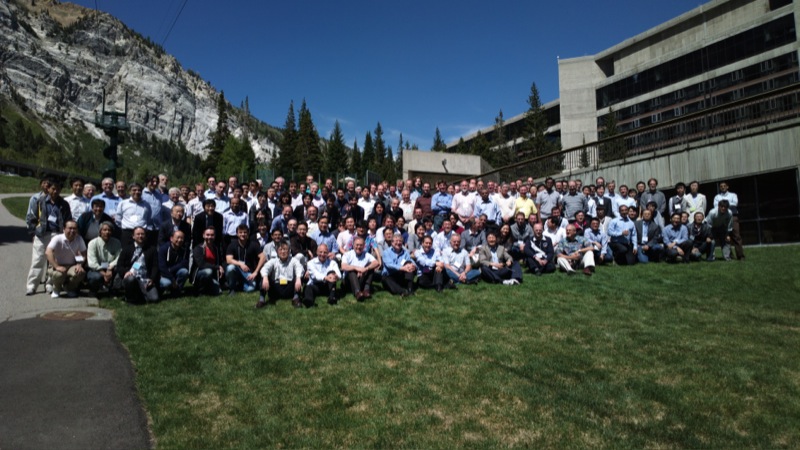 The conference's 2013 photo - click through to grab the 12MB version and play 'Spot the PureView Nokians' game!

The International Image Sensor Society's conference was in June 2013, when the Nokia 808 PureView had been readily available for a year and the Lumia 1020 was still a month from being announced. Despite the PureView 41MP sensor being ostensibly developed to solve the problem of zooming without needing a bulky zoom lens, the benefits of higher image quality and detail when not zoomed, through oversampling, had quickly become the dominant feature of the 808 at least (I'd argue that the two facets of the same tech are balanced more equally on the 1020).

Juha and his team presented this paper in a 20 minute slot at the conference - grab it and have a read if you want to geek out. Here's an extract from the intro:

The formulas for analyzing the low light performance are developed and they are compared to subjective testing results. In addition to the developed formulas, the key findings show that there is a significant amount of spatial information available above Nyqvist frequency of the camera system that can be captured with an oversampling camera. We also show that the low light performance is essentially defined by image sensor rather than the pixel size

The paper then goes into some mathematical detail to explain how using oversampling on a high resolution sensor, with smaller pixels, produces much better image quality than using a lower resolution sensor (of the same size) with larger pixels. It's all to do with density of raw information and the possibilities for extracting real world image data from it:

Typically the goal in optimizing the camera resolution is to match the pixel size with smallest resolution element that the optical system is capable of producing. In terms of sampling theorem, the pixel pitch defines the spatial sampling frequency, fS, and thereby Nyquist frequency, fN = ½*fS of the imaging system. Nyquist frequency defines the frequency above which aliasing can happen, but it doesn’t yet tell at what frequency image details can be resolved. Optics is typically matched with sensor resolution so that it is capable of reproducing image details at spatial frequency that corresponds to sensor fN / 2. The sampling done by the image sensor itself is not ideal, as pixels are not point elements but have a certain area over which the obtained signal is averaged. In effect this non-ideality acts as low-pass filter.

When capturing images of objects with repetitive patterns higher than fN frequency defined by pixel pitch of the image sensor, aliasing happens and this can be seen as moiré effect. This is evident in luminance channel at full sensor resolution, but with a Bayer pattern sensor the sampling of R,G,B color channels is lower than full sensor resolution and color moiré can result at even lower frequency...

...As a summary, it is very difficult or impossible to capture images that would have true 5 megapixel resolution with a mobile camera that has only 5 megapixels.

...It can be seen that by oversampling we can record details with good accuracy (fN /2 of 1.4 µm pixel, ~180 lp/mm) at frequency that would be clearly above the highest possible frequency without aliasing (fN of 3.8 µm pixel, ~130 lp/mm) for the “final” pixel size in 5 Mpix image.

In plain English then, by using a system with far more raw image information than is needed, above the Nyquist frequency, 5MP images can be obtained with almost zero noise and zero aliasing - hence PureView.

Fascinating. Read the whole paper here. The Nokia 808 implemented all this algorithmic work in hardware, in a dedicated chip, with shot to shot times of much less than one second, while the later Lumia 1020 does it in software, using the phone's main GPU - and is a lot slower (four seconds) as a result. However, it's hoped that future 41MP PureView devices will be able to use much faster chipsets to bring the shot to shot time down to less than a second again.

PS. The emboldened phrase above (my emphasis) also explains Nokia's edge against other 4/5/8MP smartphone cameras. For example, the Android-powered HTC One famously uses only a 4MP sensor, claiming better results because of the large 'ultrapixels', when, quite clearly, the maths shows that you get much lower actual image information and my own tests have indicated that the One and One M8 produce images tantamount to 2MP in the real world, in terms  of detail.

PPS. All of this needs to be allied to the larger sensors used, physically. I.e. backing up the higher spatial sampling frequency is a bigger piece of silicon, gathering more light. Again, backing up Nokia's imaging edge.