Nokia has announced the BH-121, a new NFC-enabled Bluetooth Stereo Headset, optimised for use with Nokia's feature phones and smartphones. The accessory combines a square control unit, measuring 39 x 39 x 12mm, with a pair of noise blocking-in-ear headphones (WH-208) to provide seamless audio from your phone to your ear. 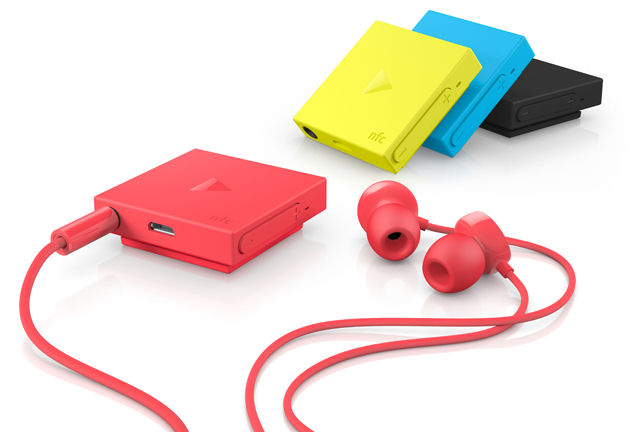 The control unit has controls for call handling and music playback (one button to handle calls and music on the top of the unit, volume and track control buttons on the side of the unit). There's also a clip on the back of the control unit for attaching the accessory to clothing. Easy pairing of the accessory is enabled by NFC (tap to pair and tap to connect), though it is also possible to pair manually, via Bluetooth, for devices with no NFC hardware. Multi-point support means the headset can be paired to more than one device at a time.

The accessory is charged via a standard microUSB port (i.e. you can charge the headset with the same charger as your Asha or Lumia smartphone), with a LED on the unit giving an indication of charge level. On Lumia devices, via the accessories module in the Windows Phone Settings app, it is also possible to pin a Live Tile for the headset to the start screen. The Live Tile can be used to connect / disconnect the device and will also show a connected headset's current battery level.

The supplied headphones, which are the same model included in-box with higher end Lumia devices, can optionally be replaced by any pair of headphones with a 3.5mm audio connector.

The BH-121 has a recommended retail price of €39 and will be available in limited quantities in the next few weeks.

The BH-121 is the successor to the BH-111, Nokia's entry level Stereo Bluetooth headset. Notable improvements over its predecessor include smaller size, standardised charging, and the availability of NFC assisted pairing.