Hardware QWERTY and long battery life have a place in mobile

File this under 'link of interest', most certainly, because the review subject isn't Symbian, but it's certainly refreshing to see positive review conclusions from the tech media (in this case, Matt Miller of ZDNet) about the idea of a QWERTY candybar device. This is a form factor that Blackberry and, to a certain extent, Nokia have made their own over the last decade and with the Symbian-powered Nokia E6 and the new Blackberry Q10 still flying the flag for QWERTY fans, it's great to see the benefits of the concept recognised again.

It's not, you see, all about screen real estate. Even in 2013. Yes, games and movies and web sites look vastly better on a 5" screen held in landscape mode, but for most other uses - the core messaging, email and social things that we do every day, the screen size is actually irrelevant most of the time, since a 5" device with virtual keyboard deployed gives you roughly the same (or even less) screen real estate free as you have on devices like the Nokia E6 and Blackberry Q10.

The other point that Matt makes is about battery life. In part the longer life of devices like the E6 and Q10 are down to the smaller screen, and in part the different use case, but the end result is that either device will give you a full day of hard use with no battery qualms.

Summary: The BlackBerry Q10 is the BlackBerry 10 device that the die-hard QWERTY fans have been waiting for and it doesn't disappoint. It's refreshing to use a hardware keyboard and enjoy long battery life on a phone again.

Long-time BlackBerry users were excited for the launch of the Q10 and reports indicate it is doing pretty well. I was pleased to see BB10 on the Z10 and didn't think there was really a place for a hardware QWERTY device in today's smartphone world. After more than two weeks of using the Q10 extensively, I am ready to swap my Z10 for a Q10 and bang away on a thumb keyboard.

The keyboard, long battery life, centralized communications system, and solid hardware make the BlackBerry Q10 an attractive product that stands out from the current crop of smartphones...

Software input keyboards have gotten to be pretty amazing with the native ones on the iPhone and Windows Phone platforms competing with innovative Android keyboards like SwiftKey and Swype. However, after using the Q10 and its QWERTY keyboard I have to say it is a breath of fresh air in the all-too familiar black slab market.

...I did feel a bit cramped with the display at times when browsing websites and trying to play games. However, for text entry you are going to consume a large portion of your display on a slab with the software keyboard so it isn't much different than what you experience on the Q10.

...If you need to be out and about all day, appreciate a new user interface, prefer a hardware QWERTY keyboard, are focused on communications, and like your smartphone to be efficient then you may want to consider the Q10.

I am personally a bit tired of all the large phones and truly enjoyed the smaller Q10. It was fun to use a hardware QWERTY keyboard again and I was able to bang out text quickly on the keyboard. I may be faster with SwiftKey or on WP8, but the ability to enter a couple letters and do more than just enter text is extremely efficient.

Some good observations in there and ones I echo. No matter what the wider tech industry thinks, I'm not convinced that hardware QWERTY is dead. Just try pumping out an email with lots of names, punctuation characters, passwords or URLs using a touch keyboard and it can get frustratingly slow....

Comments welcome on any of these reflections!

PS. See also my detailed head to head comparison of the Nokia E6 and Blackberry Q10. 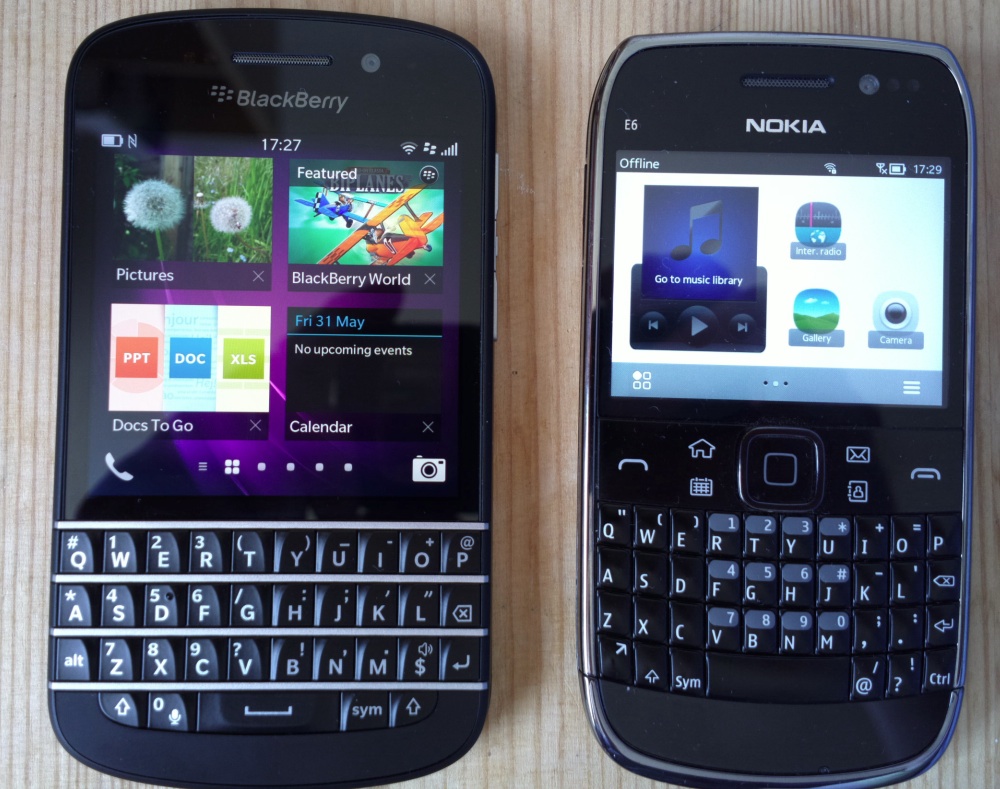