With GDC happening this past week in San Francisco, we did spot (via) an item of direct Symbian relevance. V-Play is a new Qt-based cross-platform game engine specialized for mobile (2D) games, with the unique feature that existing QML games can be easily ported to other platforms, including iOS and Android. Some quotes from a V-Play spokesperson below.

V-Play is a Qt-based cross-platform game engine specialized for mobile 2D games. It helps developers saving time and money in EVERY part of the game development lifecycle:

With V-Play, Symbian and MeeGo developers can port their existing QML games to iOS and Android easily to get a bigger reach and new monetization options. Basically we added a convenience layer on top of Qt for mobile devices and specialized for games, which includes handling of different resolutions, native access to text input fields, message boxes, video playback, audio components and more. We also set up a detailed list of benefits on our website for existing Qt developers:http://v-play.net/benefits/#qtdeveloper

Although we are specialized for games on iOS & Android, "normal" apps can be done equally well, especially if you are using a custom GUI (e.g. custom buttons with a unique style of the app not using the native-looking buttons for each OS), where QML has its biggest strengths.

Given the number of QML-based games on Symbian, it's a rather nice facility to be able to take code and also roll out ports for other mobile platforms. It's also cool that such an engine is effectively starting life in the Symbian world and then embracing other platforms. Rather than the other way round...

Comments welcome if you're a developer and have had a go with V-Play's code.

The V-Play team (shown below) can be followed on Twitter @vplayengine. 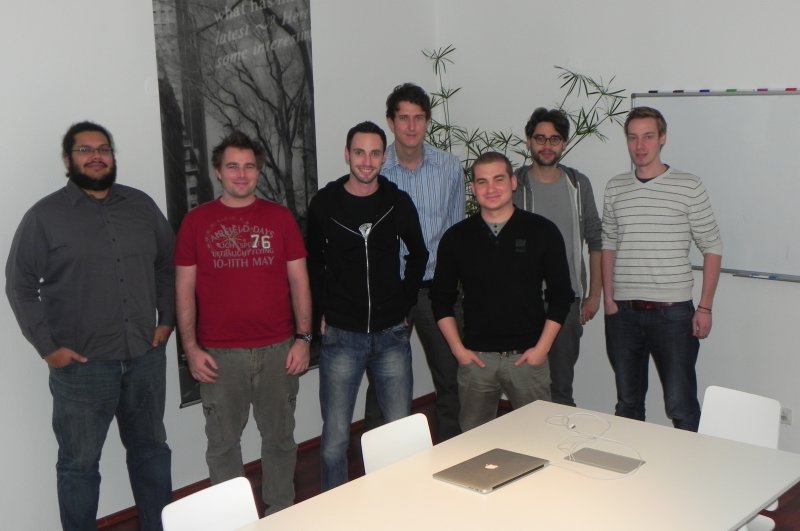