If That Then This, or IFTTT for short, is a cloud service that lets you do all sorts of useful plumbing across an array of web services. The general way in which you use it is to select one service to provide the trigger event, and select another service to do something for you upon the trigger event. IFTTT calls these combinations of triggers and responses, "recipes". For example, if someone tags you in a photograph on Facebook, IFTTT can upload that photo to your Dropbox account. IFTTT announced yesterday, via its Twitter account, that it now supports SkyDrive.

Upon closer reading of IFTTT's SkyDrive page, one will see that IFTTT is not able to use SkyDrive for triggers - i.e. Do something if a file appears in a specified folder. As to be expected, the actions that can be performed on one's SkyDrive account are uploading files found elsewhere on the Web which meet some criteria. Users can specify the file name and upload path. Note that there is a limit of 30MB for file uploads.

IFTTT give several example recipes, as shown below. One of the most interesting looking examples was synchronising files between Dropbox and SkyDrive. However, this is sadly limited to files in the public folder of a Dropbox account. However, mirroring photo uploads from Instagram and Facebook etc. to a SkyDrive folder is possible. 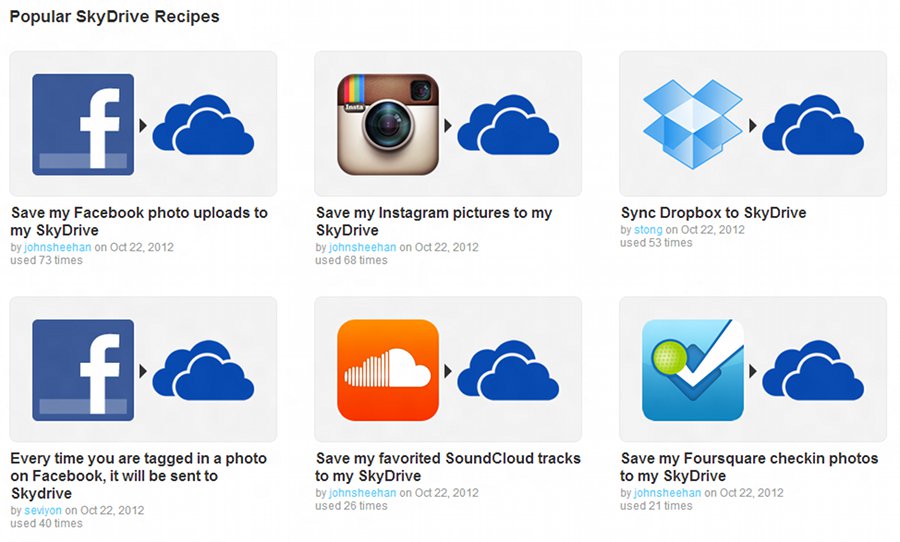