The Nokia World 2012 web site is up - and the event is in Helsinki this year, after a couple of years in London. It will take place earlier in the year, on September 25-26th, at the Helsinki Exhibition & Convention Centre. More details, including conference agenda and speakers, will doubtless appear over the next few months, so watch this space. With Symbian enjoying a last season in the sun and with Nokia's Windows Phones picking up momentum, can this years Nokia World be as momentus as 2011's? 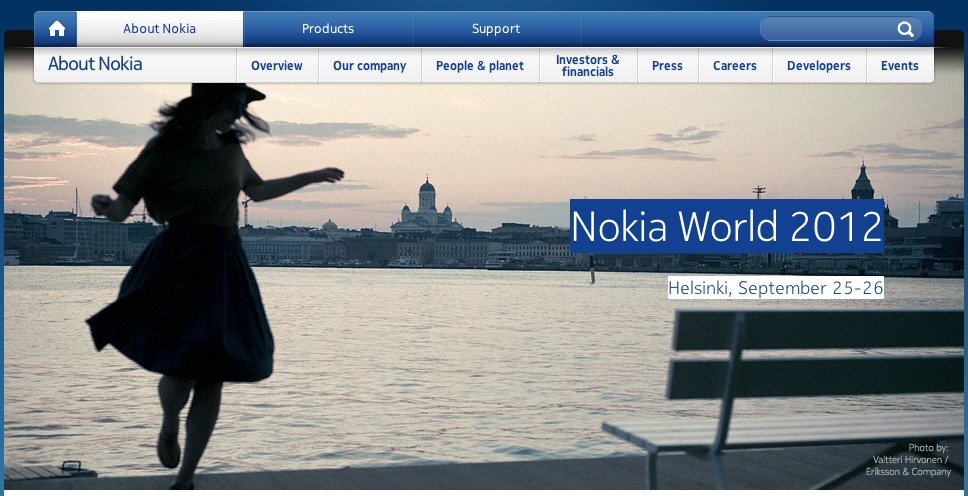 This year’s Nokia World is going to be extra special, because it will be held on Nokia’s very own home turf in Helsinki, Finland, on September 25-26.

Arranged since 2006, Nokia World brings together thousands of visitors, including journalists, analysts, operators, developers, partners and, of course, Nokia employees.

The speakers are crème de la crème of the mobile world: Nokia’s leaders, experts, partners and other stakeholders.

This is the very first time Nokia World is arranged in Finland. The timing could not be better, since Helsinki has the privilege to bedesignated as the World Design Capital for 2012. Nokia is one of the WDC 2012 partners, so it’s a natural way for Nokia to talk about its latest innovations.

Nokia World will be held in the Helsinki Exhibition & Convention Centre. Although the event is not open to the general public, if you're part of the industry in some way and you're planning on attending, there's already a sign up email address. Rest assured that All About Symbian and All About Windows Phone will be there to report back on device launches and other significant news.