David Gilson and I play tag team reviewer for our coverage of Sony Ericsson's Vivaz range. Having tackled the Vivaz, I hand over to David for the Vivaz Pro - in this, part 1 of a two part review special, he examines the Vivaz Pro's hardware in detail and runs it heavily for an intensive week of duty. Despite an appealing design generally, David was very disappointed by the battery life and felt a bit let down by the output from the 5mp stills and 720p-recording video cameras.

The Vivaz Pro is the latest Symbian offering from Sony Ericsson. Back in March, Steve reviewed the Vivaz (see parts: one, two, three, & four) and he found that it had delightful hardware but that the software suite was let down by an inconsistent user experience. Moving forward, the Vivaz Pro offers a slide out QWERTY keyboard, a lower resolution camera, and a leaner set of software.

Read on to find out whether the physical keyboard improves the Vivaz's usability and whether Sony Ericsson have managed to create a cohesive S60 user experience. 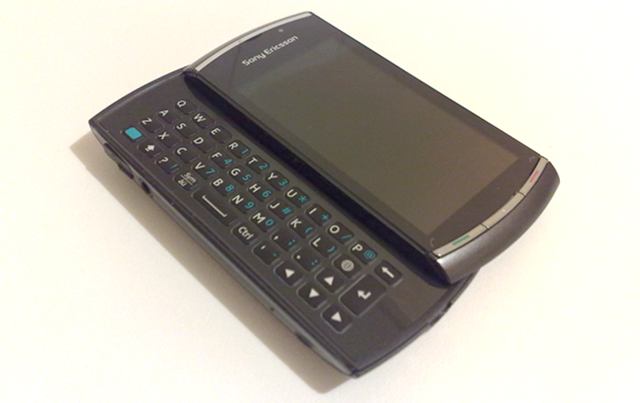 Following from the contoured plastic design of the Vivaz, the Vivaz Pro has the same attractive design and comfortable feel in the hand. The biggest design difference is the slide-out QWERTY keyboard. It's commendable of Sony Ericsson that the keyboard only added 2.5mm to the phone's maximum depth. The first ~3mm of movement when opening the spring-loaded keyboard is rather soft, and can cause unwanted slips when using the camera buttons. 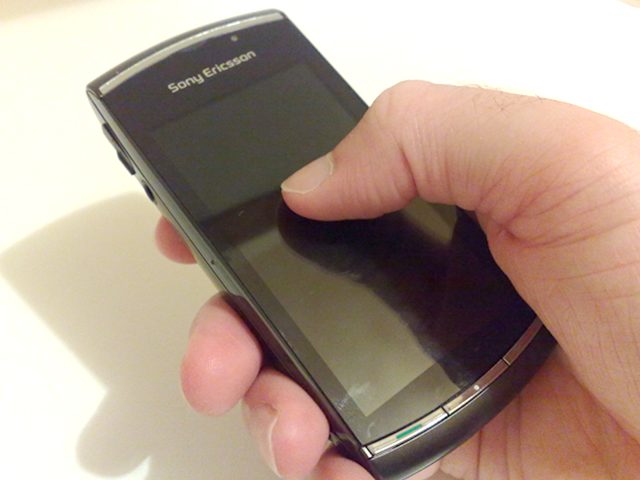 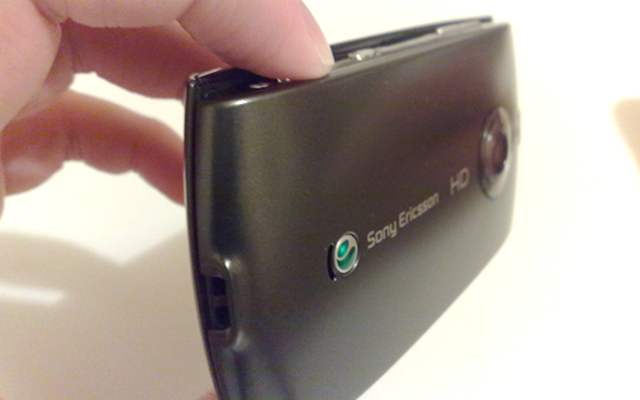 The external features of the Vivaz Pro are the same as with the Vivaz. Both sides are made from translucent plastic. The right-hand side has the same volume buttons and dedicated camera keys for stills and video capture. I hope having separate still and video buttons is an idea other manufacturers can and will adopt. Launching the camera application, only then having to then get into video mode, can cost valuable seconds on other devices.

The left-hand side is much the same too. The 3.5mm combined headphone and TV-Out socket has moved slightly to allow for the sliding screen. The curved top and bottom of the phone means that the headphone socket has to be on the side, which some people will dislike. However, this makes the Vivaz Pro better for viewing videos in landscape as the headphone jack isn't jutting out into your hand. The micro-USB socket is still covered, and attaches via a single plastic rod that allows it to swivel out-of-the-way. There is a small ridge at the bottom of the left side, this is a useful guide for aligning your thumb when taking photos; helping to avoid the problem of inadvertently pushing the screen, as mentioned above.

From the top to bottom of the phone's rear-side, we have: the power key, a red video-recording indicator light, the single LED camera 'light', the 5MP camera, and towards the bottom there is a small opening for the mono loudspeaker. The Vivaz Pro loudspeaker is sadly the worst speaker I have heard in a phone for a long time. It seems to have no inkling of a bass repsonse at all, and sounds even tinnier than the Nokia N97's stereo speakers. 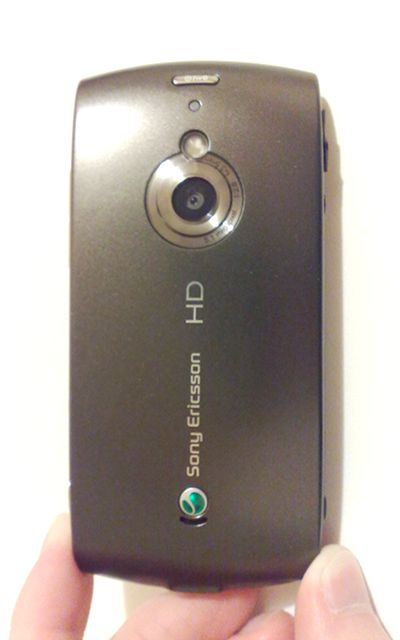 The front of the Vivaz Pro is dominated by its 3.2" TFT 640x360 resistive touchscreen. Much like the N97 mini, the colours and clarity of the screen look great indoors. Although, when viewed in sunlight, a resistive touch layer and lack of a transflective layer make for a poor viewing experience, as demonstrated here. Beneath the screen are the call accept, menu, and call reject keys, just as found on the original Vivaz. The way the keys are styled to match the upper chrome-like border of the screen looks good. Although, as with many phones, the buttons are placed so low that single-handed operation becomes precarious. 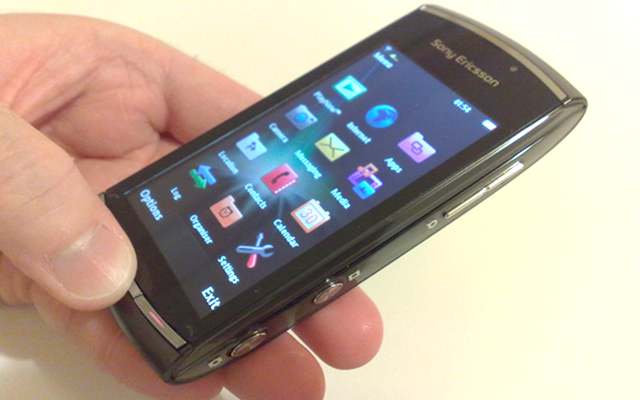 Just as with the Vivaz, the Vivaz Pro comes with a 1,200mAh battery. Overall, battery life is insufficient to take advantage of all the Vivaz Pro's functions. The Vivaz Pro will most likely last a day if used as a simple phone; i.e. with very little use of camera or WiFi/3G. While testing for this review, I found that with frequent browsing over WiFi, the battery lasted little more than half a day before it had to be recharged.

After only light usage (e.g. 5 minutes of web browsing over WiFi), the top end of the Vivaz Pro is noticeably hot. Clearly, Sony Ericsson needed to spend more time optimising their software (and possibly drivers), as there is certainly a lot of battery energy going to waste as heat. 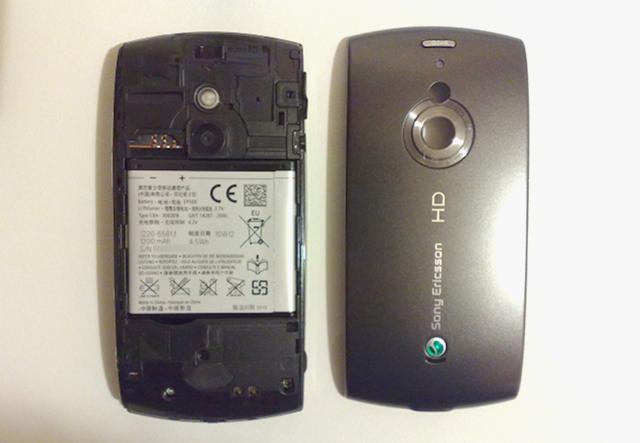 This is a crazy situation, as Steve recently ranted about. Phones should be designed to last a full day, within the scope of their selling points. Indeed, the official Vivaz Pro promotional video shows a young man about town filming Hi-Def video and liberally uploading to YouTube as he went. If this is the usage scenario that Sony Ericsson are aiming at with the Vivaz Pro, then the battery makes it impossible.

Despite its keyboard, the main input for the Vivaz Pro is still its 3.2" touchscreen. While it's hard to measure, the touchscreen seems to respond more accurately than most, especially when tapping small links in the web browser. That said, the touch experience on the Vivaz Pro feels sluggish.

The Vivaz Pro lacks a screen-lock slider, as would be found on all Nokia touchscreen phones. Instead, users have to summon the profiles menu (by pressing the power key). However, the screen lock option is immediately below the shut-down option. This means that it is all-too-easy to turn the phone off by mistake! 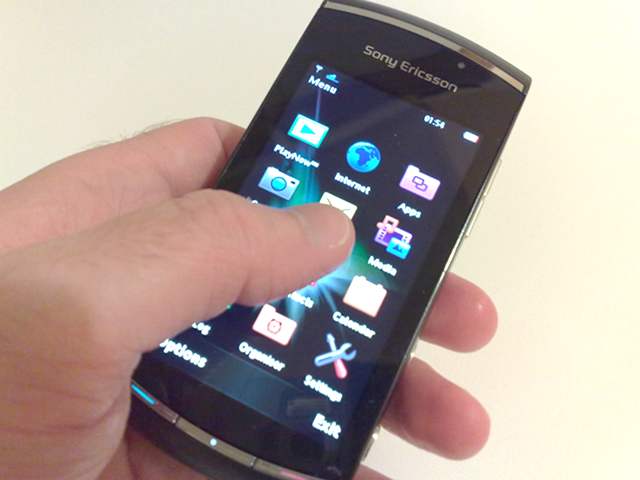 The Vivaz Pro's QWERTY keyboard layout is similar to the N97 mini's, with the QAZ keys vertically aligned on the left and the cursor keys on the far-right in an inverted-T formation. Comparing this to well-known Nokia QWERTY phones, the Vivaz Pro most resembles the E72. It has four rows, and the number keys (via modifier-key) are on the middle four columns, rather than across the top row. There's even a Ctrl key, but most pleasing is a centrally located space bar.

The keyboard responds well to a range of typing speeds. However, the space bar flexes in the middle without clicking, which makes it ambiguous as to whether the press registered. The result is occasional double-spaces while typing, as you try to compensate.

There is a strange key with a sphere symbol which accesses the language menu in text edit boxes. It is a shame that this cannot be programmed to launch an application, since setting the phone's language is something the user will probably only do once (per hard-reset), if at all. 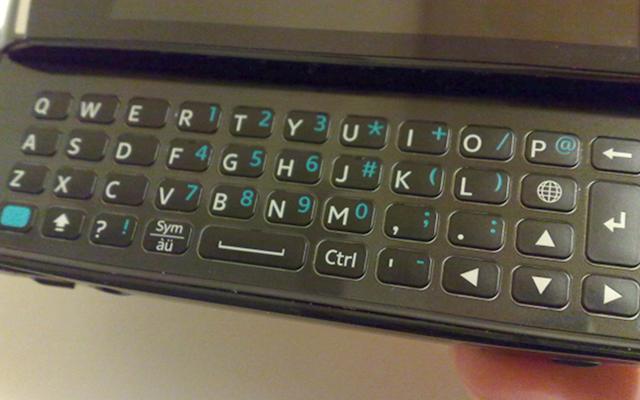 Just like the Vivaz, the Vivaz Pro is designed around its camera. The sensor has been downgraded to 5 mega-pixels in comparison to the Vivaz's 8 mega-pixels, although this is still sufficient to capture Hi-Def 720p video. There is still just a single LED light for video and stills. We've written many times on All About Symbian that LED's are insufficient for illuminating still shots, and a dual LED would make poorly lit videos look a little better. Controlling the LED light hasn't changed from the Vivaz either; the light has to be switched on manually, via menus. While this unintentionally provides a torch facility, not having the flash trigger automatically for stills will mean many impromptu evening-time shots will be missed by this camera.

The most commonly used settings for the still camera are accessed via a tool-bar on the left-hand side of the screen, and are listed below:

In addition to the left-hand toolbar, the camera interface also has a menu with more configuration options (via the lower-right icon):

A gallery of photos taken with the Vivaz Pro for this review can be viewed here.

The unsung hero of the Vivaz Pro's camera is its macro ability. While many Nokia phones claim to be able to focus as close as 10cm to a subject, the Vivaz Pro can get in a few centimetres closer, and can resolve remarkably fine detail. See the two examples below: While the Vivaz Pro's optics seem to be first rate, the image processing is another story. Great results can be had if the subject is directly illuminated in bright light. However, when photos are taken indoors, or outdoors with any degree of shade, the colours seem disproportionately washed out. See the examples below: Another weak area in the image processing is that some photos seem to be affected by noticeable jumps between different colour areas. It's as if the processing didn't capture, or even discarded, several in-between shades. See the two examples below. The video camera user interface has the same left-hand tool-bar with the most commonly used settings. More settings are accessible via the bottom-right menu.

The additional menu options give the following options:

As shown above, the Vivaz Pro video camera has focus settings for infinity or automatic. The automatic focusing is quite subtle and in most cases the process is barely noticeable, unless there is exaggerated movement between the object and camera, as in the example below.

In his Vivaz review, Steve found that 720p video was being encoded at an average rate of 100MB per minute. In tests for this review it appears the Vivaz Pro is compressing its 720p video at 50MB per minute. However, this hasn't completely cured the stuttering and dropped frames that was found with the Vivaz. Test footage for this review demonstrates various levels of dropped frames, with various types of scenes. It's not clear where the bottleneck is - the PowerVR SGX graphics chip should have been up to the task, so perhaps the MP4 encoding's done by the main processor - possibly, the demand on this to compress the 720p stream could be too much; although curing this would mean a processor that would use more battery power and drive up cost.

This concludes the hardware review of the Sony Ericsson Vivaz Pro. In part two, I'll report on the user experience and software suite.

David Gilson for All About Symbian, 28th June 2010