Flurkies: they're cute, they collect coins, and they make a really annoying "yipee!" noise. Read this review to find out why every puzzle fan should have this game on their phone. 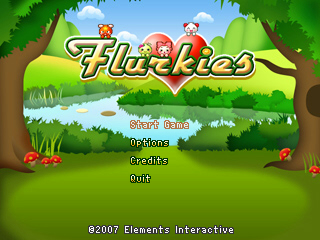 Flurkies is a cute puzzle game which involves guiding one or more creatures (Flurkies) around a small maze collecting all the coins before heading to an exit.

It's been developed by Elements Interactive, the same people who did the recently-reviewed S-Tris 2.

We've used the S60 3rd Edition version of Flurkies, but you can also get versions for S60 1st/2nd, UIQ2 and UIQ3 devices. All versions of the game are available exclusively from ClickGamer.

The Flurkies are tiny little blobs that are rather limited in their abilities on their own: they can walk left and right, jump up one square in height, and steer themselves as they fall. However, most levels have more than one Flurky, and you can switch between them using the soft key or by pressing the number of a particular Flurky on the keypad. When you make many Flurkies work together as a team you can do a lot more, for example one Flurky can push another over a wide gap, or one Flurky can climb over another to reach a high ledge.

If this sounds complicated, don't worry, Flurkies has excellent tutorial levels which make up the beginning of the game. Once you've made it through the first dozen levels you will know exactly what your Flurkies are capable of. 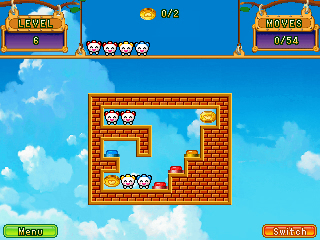 There are 60 levels in total, and you have to collect all the coins on a level to activate the exits. The exiting process isn't as simple as it seems though, because each exit has a colour (red, green, blue or yellow) which has to match the Flurky that uses it. Different Flurkies have different colours, and some levels have colour showers which change the Flurky's colour.

Flurkies, especially past level 15, is one of those games where you become absolutely convinced that something is impossible, but you keep wanting to have another go, and then after a while the solution just pops into your head. It's extremely satisfying to solve a level in Flurkies, as each puzzle is 100% logical rather than requiring any pixel-perfect movements: if you know what you have to do, you can solve the level, which is exactly how pure puzzle games should work. You can go back to any completed level at any time if you fancy doing it again.

The Flurky-switching process can get annoying if you just use the soft key, as it makes you cycle through each Flurky in turn. However, you can switch straight to a particular Flurky by pressing a particular number on the keypad. It would be great if this number was actually visible on the Flurkies themselves though, as it's not very easy to remember which one is which. 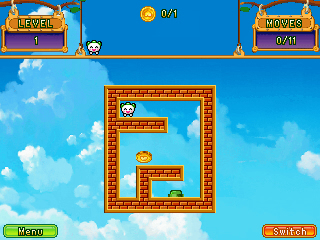 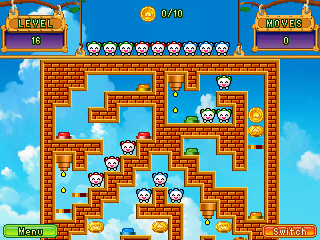 The tutorial levels in Flurkies are simple, but the later levels are more complicated.

Flurkies' graphics are from the same "cute" school as Bubble Bobble and Pengo, with nice bright colours and clearly-drawn sprites and playing areas. Everything conforms to the same grid system, so you know exactly how far a jump is, or whether a Flurky will fit through a gap.

However, one serious complaint this reviewer would make about the graphics is the method for indicating the colour of a Flurky. They're almost identical white blobs with a smiley face, and you can only tell their colours from a very tiny bit of hair on the top of their heads. Even the hair isn't that clear, because it's so shiny that there are only a few pixels of the actual colour itself. The Flurkies' colours were difficult enough to see on the N93 with its relatively large screen, it must be even more tricky on a device with a smaller display. It would improve the game greatly if the Flurky sprites were entirely their current colour, because solving many of the levels depends on knowing which Flurky is which colour.

A more minor problem is the small font size used on the menu texts, which provides more needless eye strain.

The sound is made up of ultra-jolly tunes and cute sampled nonsense burbling from the Flurkies themselves. To be honest this reviewer couldn't stand it and put the game on mute, but it's entirely a matter of taste. The sound doesn't affect the gameplay at all, it's entirely optional, and you can adjust the music and effects volumes separately.

Flurkies looks very good and plays very well on a TV screen, it feels just like something you might have encountered on an Amiga or SNES. As it's easier to see the Flurkies' colours using TV Out, it also improves the gameplay significantly, and it's much easier to read the menu texts too.

Because it's a turn-based game, Flurkies plays particularly well on a Bluetooth keyboard, in fact it's even better than the phone's own controls. 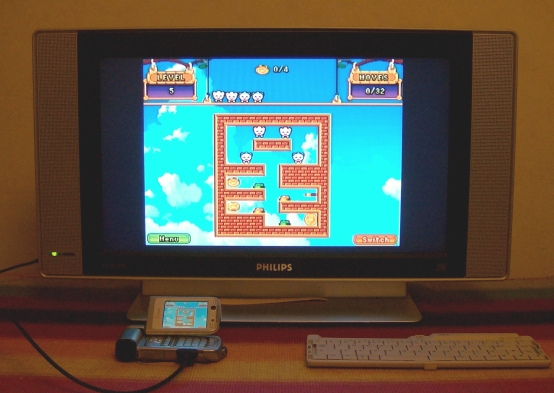 It has some flaws, the most serious of which is the unclear way the Flurkies' colours are shown on-screen, but if you can cope with these (and this reviewer could) then the game is highly recommended.

PS: You can see a video of Flurkies for S60 3rd Edition in action over at the Unofficial Nokia Gaming Blog.

The game reviewed here was the Symbian S60 3rd Edition version of Flurkies. It was reviewed on a Nokia N93. The screenshots are taken from the horizontal QVGA version, but the game is also available in a vertical QVGA version, and also in other resolutions (176x208 and 352x416).

You can buy Flurkies for S60 3rd Edition from this link.

There are also S60 1st/2nd Edition, UIQ2 and UIQ3 versions on the same site.