Calling all power users, if you're interested having a widget that can show you exactly how your phone is performing, then qooSystem is something for you. Symbian^3 brought better task management options with live previews of apps and a 'Close All' feature. However, a dedicated task manager goes well beyond that with the ability to audit, close or kill running processes, which is exactly what qooSystem does. Read on to see how well it all works.

qooSystem is similar to other titles from qooApps in that the main interface is navigated via several small tabs at the top of the screen. Furthermore, one of those tabs controls the appearance of the complementary widget that all qooApps software offers. 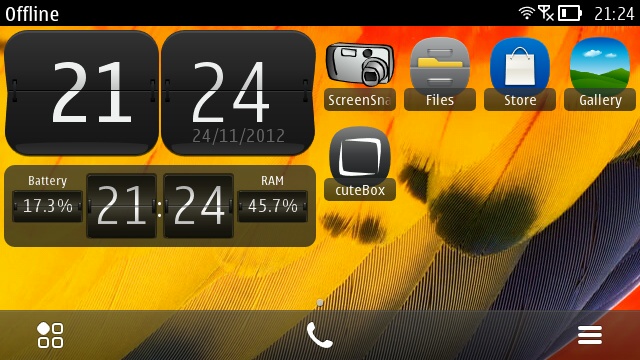 Talking of the widget, this is probably its most attractive feature. Many third party widgets, both on Symbian and Android, stand out and make their function blatantly obvious. qooSystem, on the other hand, is quite subtle in that it has two places to show system data (chosen from a list which will be detailed below), placed either side of a clock. In this way, the widget could simply replace a standard clock widget, but with the added benefit of more information.

It has to be said that there is only one widget design. So, if you did want to see more than two quantities at once, you'd be out of luck. Also, qooApps has stuck to the older pre-Belle widget format. It's laudable to maintain backward compatibility, but it also feels like a lost opportunity to not take advantage of the creative options offered by Nokia Belle. 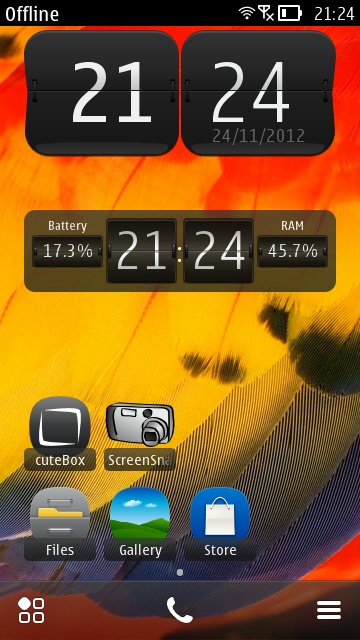 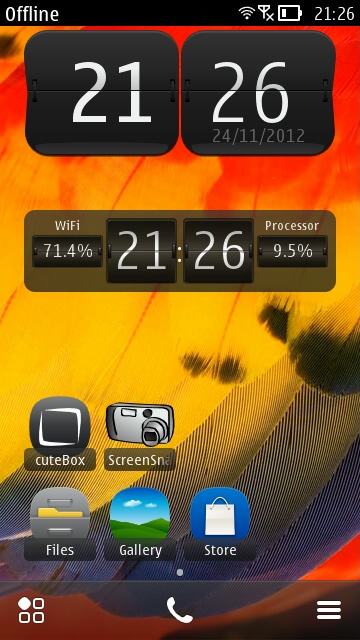 To be fair, widget configuration options do provide for some aesthetic creativity. The widget background and data area background can have both their colour and transparency set.

Moving on to the application user interface. The first tab is the most useful as it gives live data on all of quantities available to the widget: Processor (CPU), Battery, RAM, WiFi (signal strength), and usage of all drives. 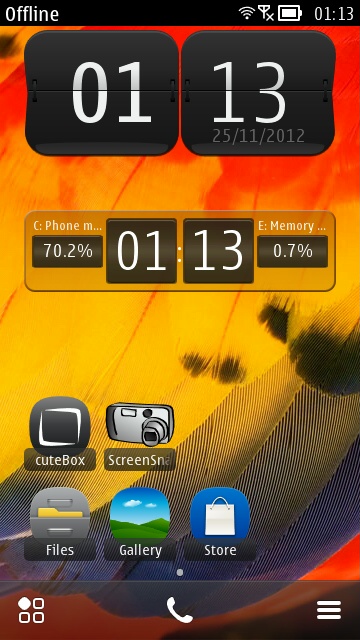 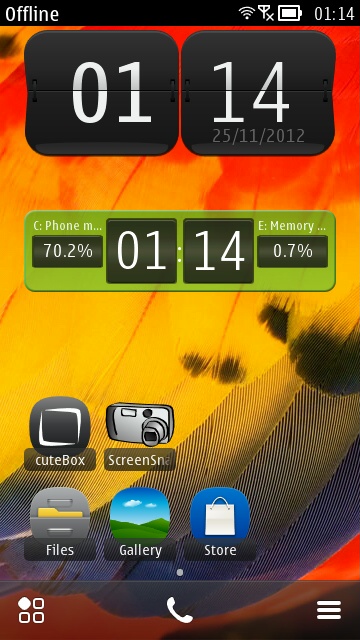 The next tab, "TASK", shows a list of all running processes complete with CPU utilisation percentages. By default, the list shows visibly running processes, but can be expanded to show background processes, and system tasks running in the background. Long-pressing any process gives the option to switch to it, and close or kill it. The difference between the latter two can be thought of as a graded response when trying to shut down errant applications. It also provides an "End GUI Tasks" button to shut down all user level applications – just like using the "Close All" option on the standard task switcher. 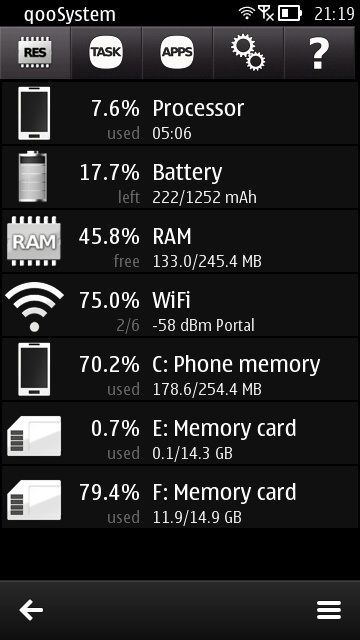 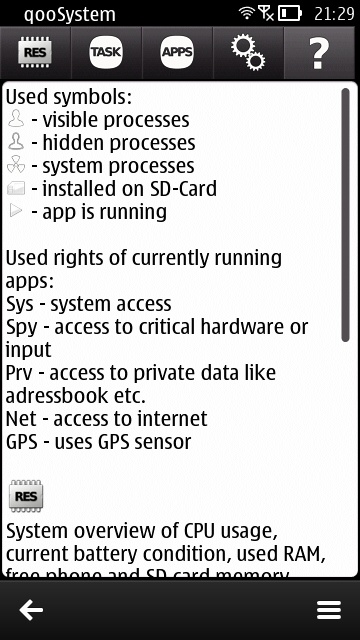 The following tab, "APPS" gives a complete list of all installed applications. Sadly though, the only long-press option here is to run each application. I hoped to find options for uninstalling and displaying details about applications too. In fact, this APPS list offers less functionality than the "Installations" section of the Settings application. 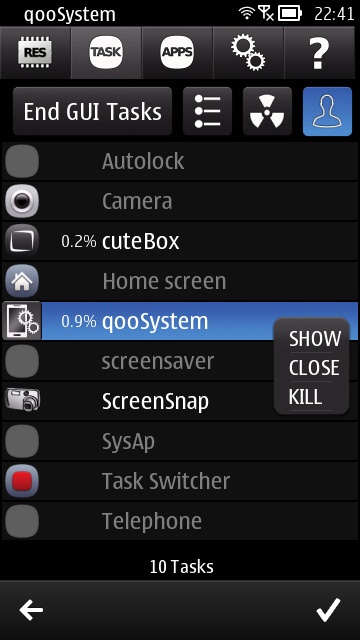 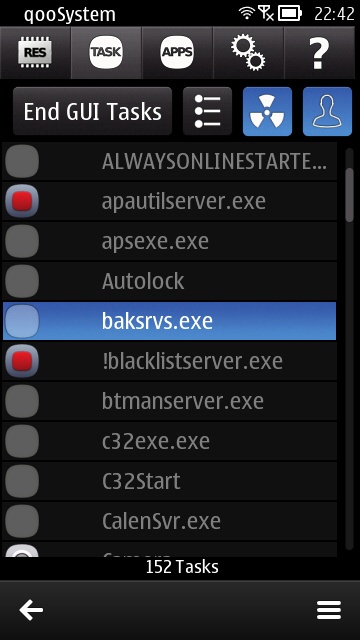 On a more positive note, the APPS list displays the path (i.e. drive and directory) of each application. So, if you were ever curious about where applications were stored on your device, qooSystem will act as a handy guide. 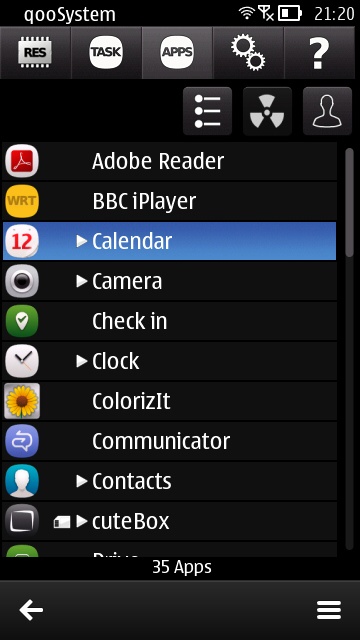 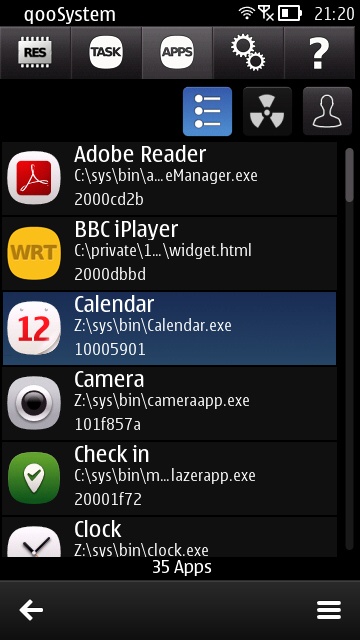 In trying to think about who qooSystem would appeal to, it really does seem stuck between two extremes. Those who want something akin to the Windows Task Manager will be disappointed as there are no time graphs of system activity. Meanwhile, most users probably wouldn't want to be concerned with such details.

Still though, for just £1 on the Nokia Store there is a fair amount of novelty value to be had.