Look away touchscreen-only users, Shortcuts is designed for Symbian smartphones with physical keyboards, so we're talking N97, N97 mini, C6-00, E6 and E7. What it promises though, is a wonderland of keyboard shortcuts that let you fly around the applications running on your fully multitasking smartphone. It's slick, it works, but it's currently in need of extra development and I was also puzzled that some potential shortcuts seem blocked for some reason.

Anyone remember the old Nokia Communicators (and Psions before them, but let's not get too sidetracked), with their row of application shortcut keys? With one press you could be flying between (or starting) applications, without having to go through a traditional homescreen or application launcher.

The E90 Communicator again had application specific keys, plus a couple of customisable ones.

But then we hit the E7 with its full touchscreen and only the single key for bringing up the homescreen or app launcher. And, perhaps more than the sealed battery and non-expandable memory, it was the lack of physical application shortcuts that cast doubt on whether the E7 was a true Communicator or not.

Which is where Shortcuts steps in, also working on other Symbian phones of the modern era with physical keyboards. The idea is to map particular combinations of keypresses to the applications of your choice: 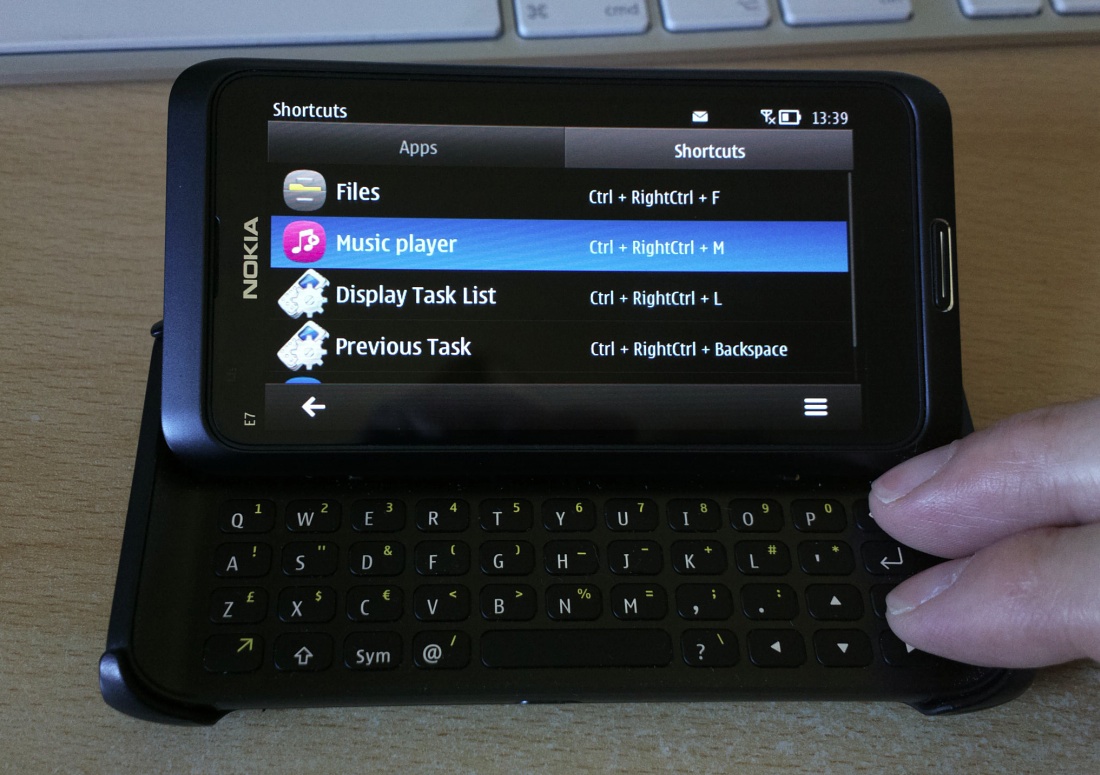 In setting up shortcuts, you start with the built-in applications list (with search) - tap the one you want to highlight it and then head for the Options menu: 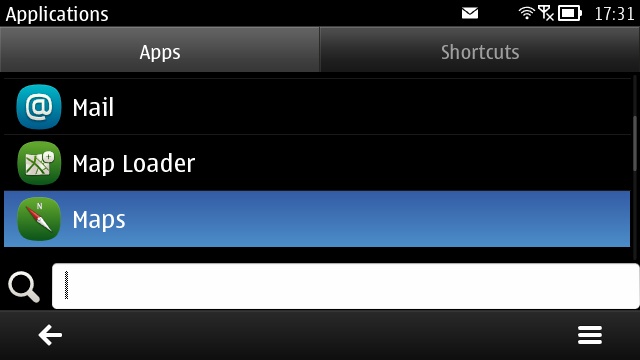 Highlight an application and then find 'Create Shortcut' on the menu: 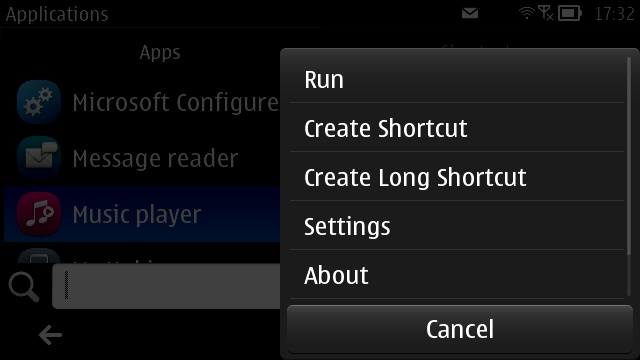 At this point you can record whatever two-key shortcut you want (there's 'Create Long Shortcut' on the menu if you want something more complex), in this case 'Ctrl'+'m' for Music player, though for some reason the 'Ctrl' keypress itself gets listed as 'Ctrl + RightCtrl': 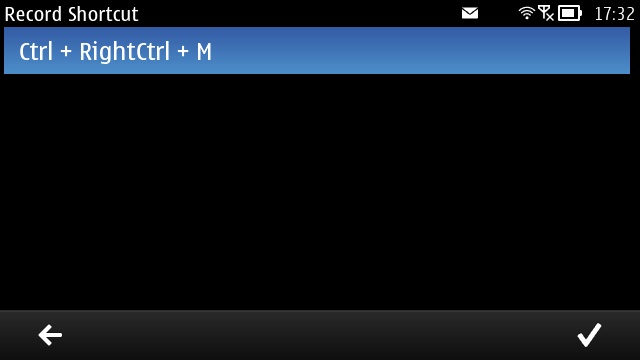 Regardless, the keypress works fine. Anywhere on my E7 (in this case), with the keyboard slid out, I can hit 'Ctrl' + 'm' and up pops the Music player. Buoyed up by this, I went assigning another dozen or so shortcuts, though there's the challenge of finding appropriately memorable combinations - so having Music player, Mail, Maps and Messaging all starting with 'm' really doesn't help! 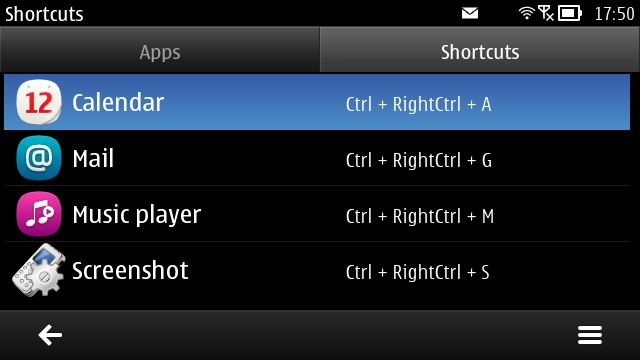 Somewhat disappointingly, I found that plenty of combinations (e.g. 'Ctrl' + 't', 'Ctrl' + any number) simply don't work, either coming up with an incorrect character or showing 'null'. In practice, about half the Fn/Ctrl combinations I tried weren't allowed, which proved a little frustrating. For example, being able to have 'Ctrl' + Q/1, W/2, E/3, R/4, T/5 etc would have allowed me to mimick the old application keys from the Communicator range.

Once set up, you'll want to backup your shortcut assignments and handily this function is built-in, saving them to a custom file in the folder of your choice on card or mass memory. I did find this buggy though, in that Shortcuts won't then (later) allow you to select this file to restore from (in my case from the root of my mass memory). 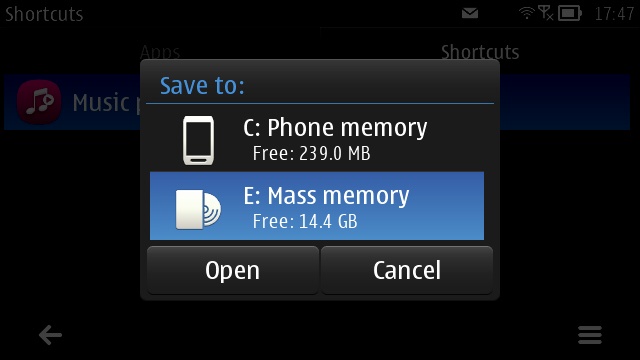 Also built-in are a task manager and a screenshot facility, each of which also lets you assign a shortcut combination. Useful, though I was even more interested in the 'Next task' (or 'Previous Task') facility - assign this to a keystroke (I chose 'Ctrl' + 'Backspace') and you can use this as 'Alt tab' on a desktop computer, i.e. cycling through all applications that you're currently running very fast. Possibly my favourite feature of Shortcuts! 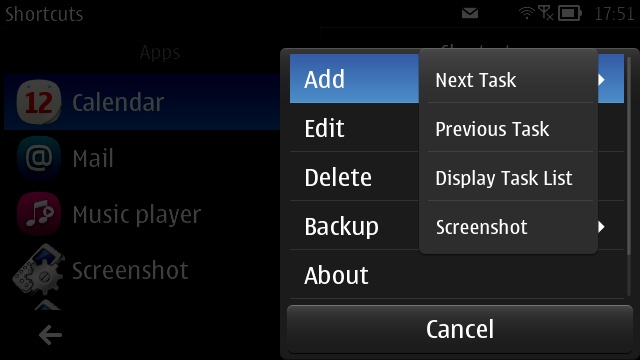 How you use Shortcuts is, to an extent, limited by the keystrokes it allows you to use. But it's also limited by your own memory (how many combinations can you keep in your head? - I topped out at about 10). Happily, everything you've set up is listed on the main 'Shortcuts' tab, for easy reference.

I did experience one glitch, where all my shortcuts disappeared following one abortive attempt too many to record extra keystrokes - which, of course, is where I found out about the aforementioned bug in loading shortcuts from the backup file!

Although switching from task to task was lightning fast (using my 'Ctrl' + backspace combo), there's an interesting display artefact when bringing up an application via a dedicated shortcut - the Symbian dialler gets shown for a fraction of a second before the application cuts in. I'm assuming this is something unavoidable, but if the developer can fix this then Shortcuts would operate more slickly.

Glitches and slight frustrations aside, now that Shortcuts is on my Nokia E7 it's not coming off again - it almost makes up for the lack of Communicator-like app shortcut keys and helps validate the entire form factor. Similarly for the N97/mini/C6-00 and so on - as long as you have the keyboard slid out! Which, I'd venture is pretty natural, at least for the E7/N97.

Shortcuts is £3 in the Nokia Store, so not quite an impulse purchase. But if you're as excited by its function as I am, I'd highly recommend grabbing it, enjoying it and feeding back as much comment as you can to the developer, who does seem keen to keep Shortcuts fully updated.