It feels as if all the games I review lately are variations on established genres, so I was happy to find IronWorm, which seems to defy classification. In IronWorm (a remake of SwingWorm), you play a worm with a vendetta, and in his quest to chase down his nemesis, he has to climb and swing his way through increasingly complicated environments, with a gymnastic grace that deserves to be in the Olympics! His only weapon, and protection, is a mace-tipped tail, plus YOUR coordination and cunning. 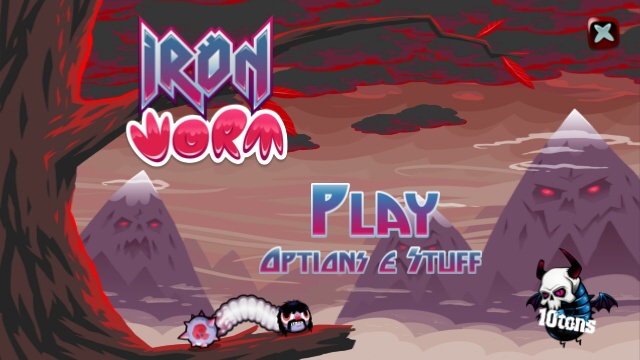 When I saw IronWorm, my sceptical mind started trying to find what meme it was making use of. Given its heavy metal style, I did wonder about Marvel's IronMan and AC/DC tie-in, but no, IronWorm is quite unique. The main character, IronWorm, looks like he should be in a glam metal band; in fact, he wouldn't look out of place as a member of KISS!

The general graphical style is cutesy, but grotesque as well, with something of a satanic slant to it, but it all fits together nicely. The music and sound effects work perfectly together. The soundtrack is a high tempo electric guitar piece, and every time you despatch an enemy, the game plays a strained guitar note – take out several in one go, and the notes change, almost as if you're playing a riff along with the soundtrack – very Bill and Ted. 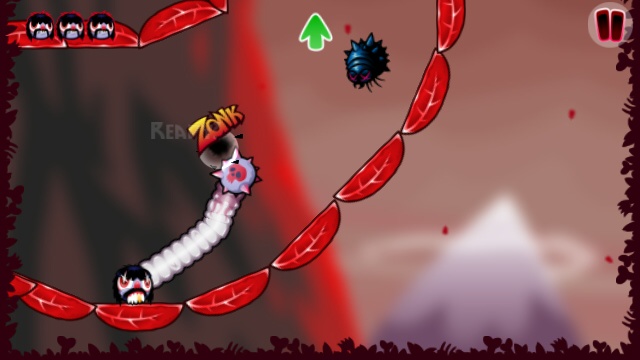 IronWorm kind of shares some heritage with Angry Birds – in as much as it is physics-based, levels are split into episodes, and it defies classification. In fact, given that birds prey on worms, it begs the question who would win in a fight, Angry Birds or IronWorm? (Cue: Harry Hill shouting "There's only one way to find out – FIGHT!")

Yes, contributing to the destruction of the perception that physics is not fun, IronWorm makes use of pendulum motion and elasticity. This is because our hero is basically two weights connected by a stretchy (and wobbly) body. At one end is his head, resplendent with a gold tooth and glam rock fringe, which can bite on to the surroundings as an anchor, but is vulnerable to enemy strikes. At the other end, we have a spiked mace. Not only can this act as an anchor too, but it is a weapon, and a shield. 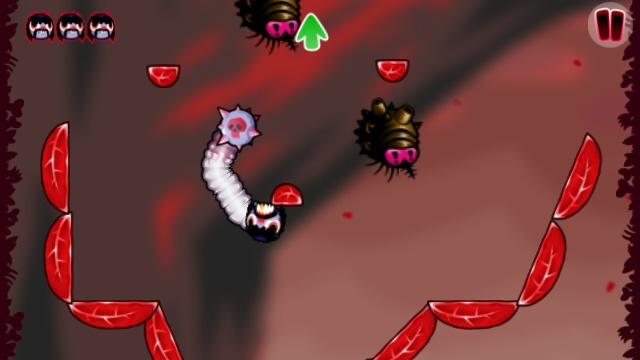 Using the tail to defend yourself

As you might have guessed, you move around in the game by alternately swinging the head and tail. If you're going slowly, you can walk IronWorm along platforms, or you can make great big swings to cover more ground – but this opens you up to more enemy shots and inadvertent collisions. If the head or body touch an enemy you lose one of three lives. The larger the swinging arc you make, the more IronWorm's body extends, thus allowing you to go further. 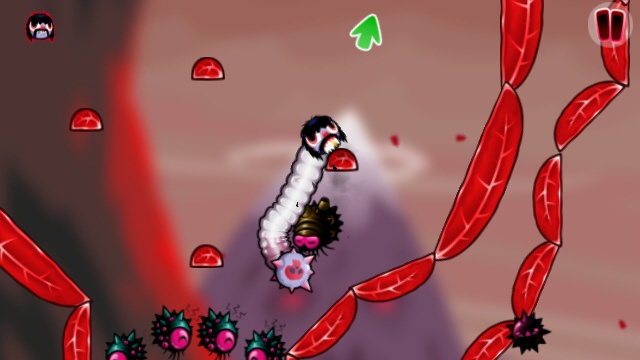 IronWorm being hit in his soft underbelly!

The object of the game is to get from the starting position to the exit, continually chasing the evil boss, which is some sort of skull-headed beetle thing. However, in between there are various types of minions in your way, who you either have to avoid or kill. Some of them will fire sharp looking objects at you, which is where using your tail as a shield comes in. 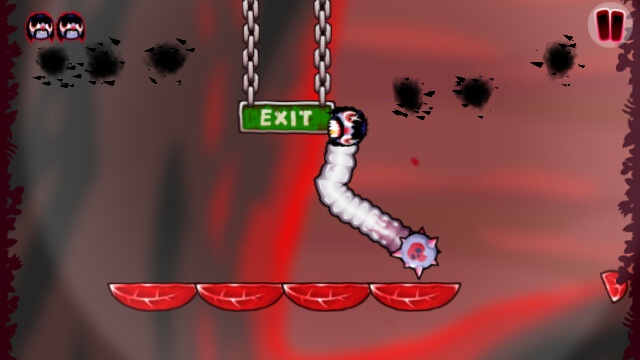 In what I think was an intentional design, IronWorm isn't as responsive as I thought it would be. Your finger gestures must be quite exaggerated to get a decent swing going. Once it is moving, it is quite mobile, only limited only by the body folding up on itself and having a noticeable minimum folding radius. As such, you may sometimes have to swing to get rid of kinks – in much the same way you'd smooth out a bed sheet by sending a wave along it.

You can hold IronWorm up in space, poised to make an attack, or timing a swing onto a moving piece of scenery. You have to be careful that your soft body doesn't get hit while you wait though. While posing like that, I felt quite disconcerted, as the realistic movement actually felt quite creepy, as if I was handling a snake. Given that software (on a phone!) can produce this kind of movement, I wonder about a future where the military sends robotic snakes after its enemies, but I digress. 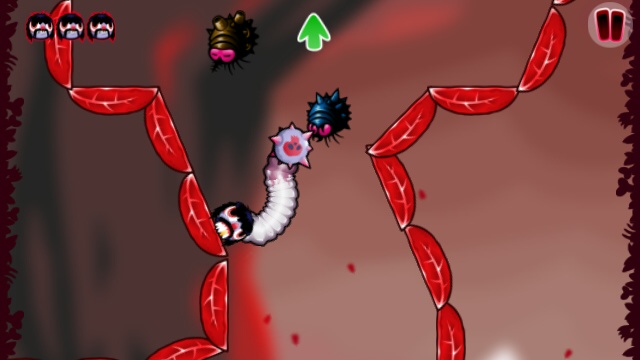 As hinted at in the last paragraph, there are different types of scenery which helps to keep the gameplay fresh and interesting. Most of the world is made up of red leaves, which your head and tail can bite into. However, there are wooden propeller type objects which you can hitch a ride on. There's ice and glass which your teeth can't attach to, but your tail can, and it can also smash glass to open up new areas of the map. 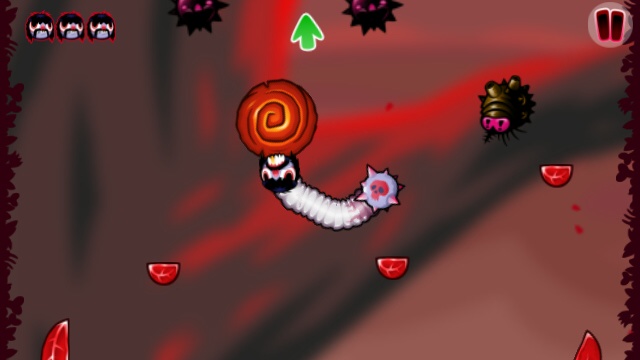 It should be noted that IronWorm isn't completely original. It's actually a remake of SwingWorm (reviewed by us last year), also by 10tons Ltd. Rather than slaying foes in a hellish landscape, SwingWorm was a much nicer game with zero emphasis on killing and battle. Much of the in-game text is the same, and the game mechanics are 99% the same - IronWorm feels slightly less responsive than SwingWorm. If you're going to be passing this game off to your kids, SwingWorm is probably the better bet. However, IronWorm is a more dynamic game by virtue of having to use your tail for offensive and defensive maneuvers, rather than just collecting fruit!

That said, if you like your games to be a bit different, a bit quirky, and to have a life-like feel to them, I can't recommend this game enough. I had a great time playing it, and after testing, I had a hard time putting it down to write my review. You can slither to the Nokia Store and gobble IronWorm up for £3.00.