Yes, yes, I know the OS is supposed to handle RAM for me. And, on the whole, it does a fine job. But I wish Nokia/Symbian would trust me with the salient statistic of how full my phone's RAM is. It's a statistic that only an uber-geek would want, but then that's me. In the past I've installed task managers or file managers, just for an incidental RAM reporting menu option, but this is much easier. One tiny and simple (and free) widget and I can now see exactly how much RAM is left with once glance at my home screen.

RAM, however much Nokia and Symbian would like to hide its existence (it's never mentioned in official product pages, for example, and it's never referred to in user manuals), is actually crucial to getting the absolute most out of a Symbian smartphone. With more RAM comes more potential for multitasking, which means faster app switching and smoother operation overall. And, when things do occasionally go 'wrong' (e.g. a game closes) a readout of RAM may well provide a clue as to whether lack of this was a culprit.

RamInfo is a small and free utility that comprises a stub/advert screen (if launched from the main app menu) and (mostly) a widget that can be added to a Symbian (^1 or ^3) homescreen in the usual way. See it in action below, beneath my Battery Info widget: 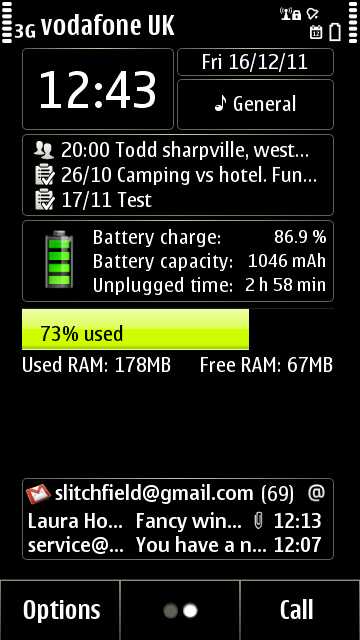 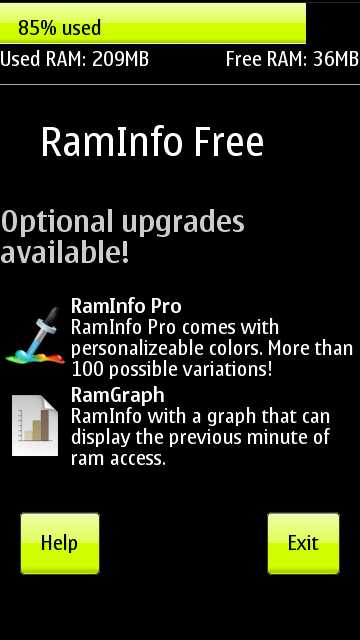 The widget is updated whenever this particular homescreen is on-screen, which seems a nice power consumption compromise - I've not noticed any lessening in battery life since installing it. One nice touch is that the bar chart is animated, in that if it was last on 72% used and, on bringing this homescreen up, RAM useage is now up to 77%, then the green bar will smoothly 'grow' to the new figure, emphasising the direction of the number change. Nice.

As the stub/ad screen states, there are other versions of this little utility available, at cost (£1 or so): one with customisable widget colours and one with a 'history' of RAM state over the last minute. The latter sounded interesting, but I'd have wanted a much longer time period (e.g. looking at RAM over the last hour) - maybe an update can address this wish?

If you know the difference between 'RAM' and 'Memory' (by the Nokia definition), and if you have a spare homescreen widget slot, then you're a prime candidate for RamInfo. Grab it now.