I complete our All About Symbian review of the diminutive Nokia 700 with this, part 3, looking at the bundled applications I haven't mentioned so far, at the device's highlights and I deliver a verdict on who the 700 is perfect for (clue: it's probably not for serial smartphone geeks). Watch this space for reviews of other Symbian Belle-powered smartphones, including the larger-screened 701. 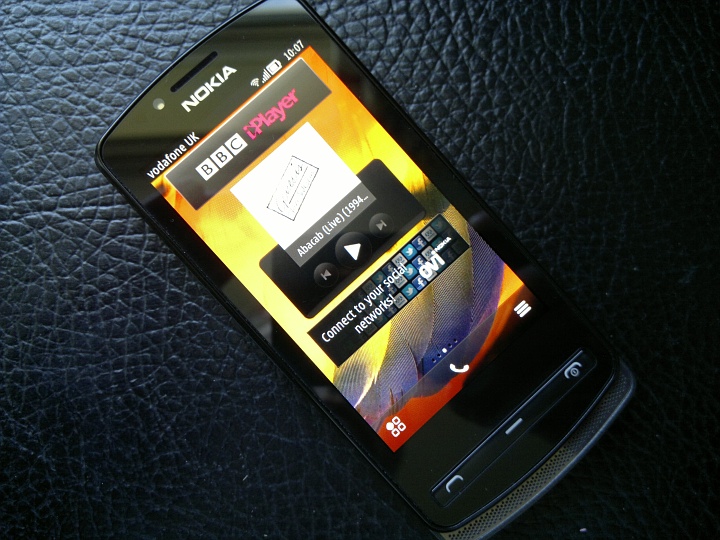 The story so far

See also part 1, looking at the 700's hardware, at its performance and an overview of Symbian Belle interface:

"...it's superbly functional, with a full suite of most things we've already seen and enjoyed in previous Symbian^3 phones, all in an incredibly compact form factor. Standouts for me on the hardware front are the screen quality, the feel of the aluminium battery cover and the decent forward-facing speaker."

Plus part 2 of this review, looking at the 700's camera and camcorder functions, multimedia functions and NFC capabilities:

"I'd rate the Nokia 700 camera as producing 'fun'/feature phone snaps only.... It is what it is, though, and it'll be down to individual users to work out whether they take a lot of phone photos and can live with the 700's output..."

"NFC is starting, just starting to become a 'must-have' on my personal phone buying check-list. It's not there yet and most Nokia 700 buyers won't have heard of NFC, but it's great that it's there under the hood for when needed in the future..."

"Balancing all the elements above should give you a speedy way to navigate between different applications and data in Symbian Belle. Purists will argue that it's not better, it's just.... different. And they'd be right. But this is 2011, Symbian is trying to 'fit in' to a smartphone market which seems to be wanting to run away from it, and Belle is a nice step away from S60 and the 'one-handed UI' paradigm, and definitely in the direction of the mainstream. "

Which brings us to the final review part. Aside from the UI differences mentioned in detail in the tutorial above, there are plenty of other detailed touches:

Apps such as Calendar and Web, which got a big UI update for Symbian Anna, have, of course, retained the improvements. So, for example, we have the split screen month/day view in Calendar and the 'top of page' URL bar and sanitised controls in Web. 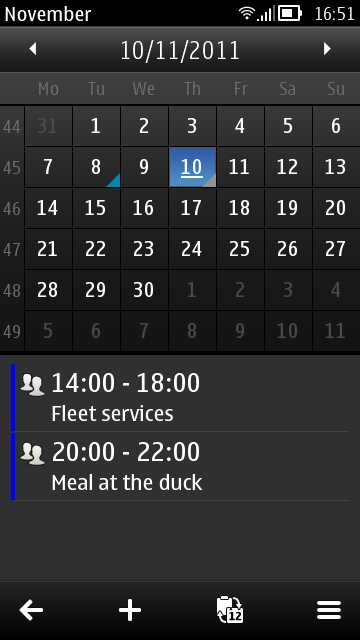 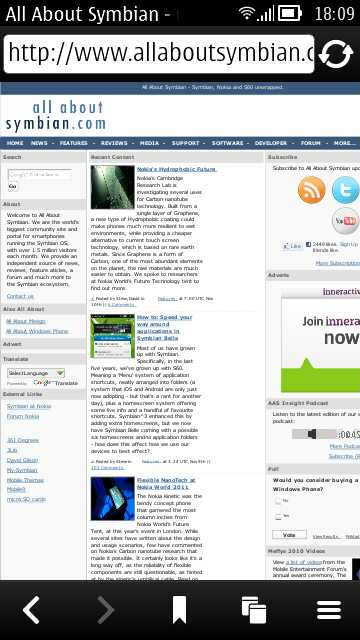 In addition, several applications have been tweaked as part of Symbian Belle. Messaging has lost its visible tabs (Outbox, Draft, etc.) - these are relegated to the 'More' menu. Quickoffice and Videos have received minor cosmetic updates - you get the idea. Nothing earth shattering, but most applications have been squeezed into the Belle UI and are arguably more useable as a result.

Nokia Social is bundled, as with the Symbian Anna release, but hasn't progressed significantly. In theory, it should run faster on the Nokia 700 than on the older generation of devices, but I couldn't tell any difference. For casual users of Facebook and Twitter it just about does the job, but it doesn't do it with any panache or any great alacrity. 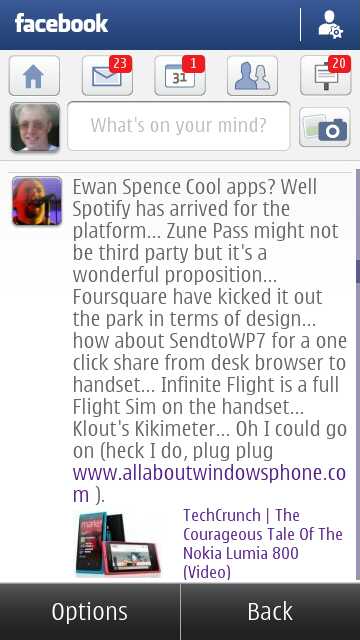 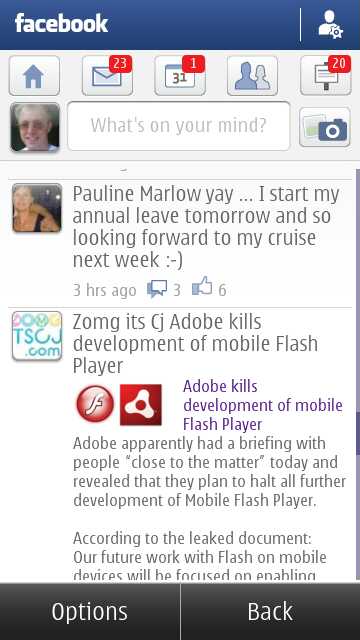 Vlingo 2.4.43 is installed, the very latest (and totally free) version, i.e. what used to be Vlingo Premium, and this does really well for quick notes, emails and texts. And, as I demonstrated recently, on older hardware, it's pretty good for kicking off web searches too. A homescreen widget makes it a doddle to incorporate Vlingo into your day to day operations. It's not as sophisticated as Apple's (bought in) Siri virtual assistant, but it gets much of the same functionality done. 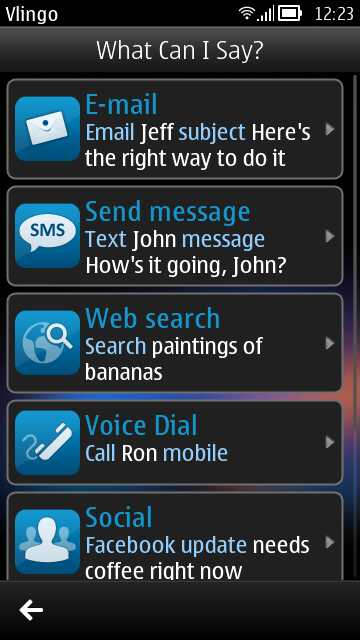 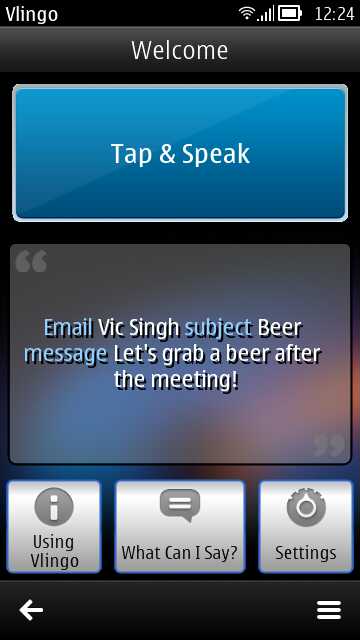 Youtube 2.4.10 is installed as well, instead of the previous web shortcut version. Either Nokia has realised that most users don't know how to work the Youtube mobile web site (double-tapping videos to go full-screen, etc.) or maybe Google has tweaked enough on the back end (or Nokia in the OS) that this existing Symbian client works well enough - it's certainly quite sufficient on the small and crisp 3.1" screen here, though it's worth noting that its 2010 heritage means that the bottom toolbar remains resolutely S60 5th Edition-style! 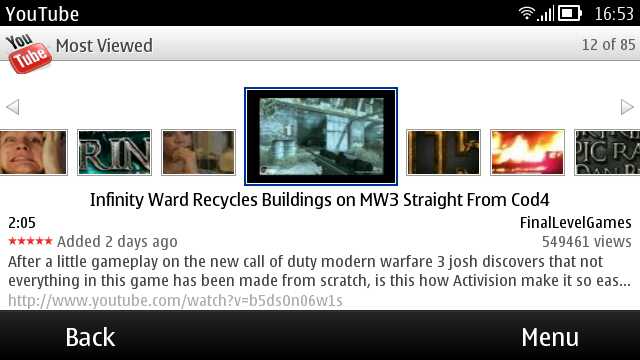 BBC iPlayer is ensconced as a menu item (for UK Nokia 700s, at least), but this is indeed just a web shortcut, since that's how iPlayer works these days. There's a homescreen 'widget', but it's sadly just an over-sized shortcut icon - there's no live content.

I covered the revamped (but still in need of tweaking) Camera interface in part 2 of this review - but credit where credit's due, the result is world's more useable than the first touchscreen version of S60 Camera (on the Nokia 5800, effectively two generations ago in the same line of devices).

Of lesser note but also bundled on the Nokia 700 (at least on my UK review unit) are:

There's no denying that the Nokia 700 is a desireable slice of modern technology. It matches the late 2011 Android-powered Sony Ericsson Xperia Ray almost exactly in every way (shown below), with a much better (though slightly smaller) screen and NFC but at the expense of a worse camera and an arguably weaker ecosystem. To have all the goodness of the best of Symbian, with all that OS maturity, the fast processor, the masses of RAM, plus NFC, all in such a diminutive form factor is nothing short of astonishing.

But talk of ecosystems and OS maturity completely miss the point of the Nokia 700. This isn't a device that anyone will research and then buy online. This isn't a device which will be sought out "because it runs Symbian" (especially not after the last year of bad publicity). The Nokia 700 will sell on looks, on size, on feel in the hand, on the gorgeous display - which means that it will sell best in phone shops across the world, where people can get hands-on.

And it's unlikely to be the geeks who even try it - they'll be heading for larger-screened devices, perceived to be more powerful. The proportion of smartphones-to-feature-phones in the overall phone market is growing steadily and the 700 is perfectly placed to be someone's 'first smartphone'. It's no larger than whatever else they'll have been used to, it doesn't cost the earth (£15/month on contract, less than half of what the likes of the iPhone and Galaxy S II cost), it looks a million dollars and the feel in the hand screams premium.

Even the disappointing (from my point of view) camera will probably be a step up from many feature phone units. And the inclusion of NFC, while unlikely to be appreciated right now by a purchaser, will give dividends in 2012 as NFC use starts to grow significantly.

And with Symbian Belle on board, the user interface doesn't rely on half a decade's worth of S60 or Symbian apprenticeship to work out. Which means that, if it's marketed right and put in shops in realistic dummy form or, better, live security-tethered units, I think the 700 will sell very well indeed. 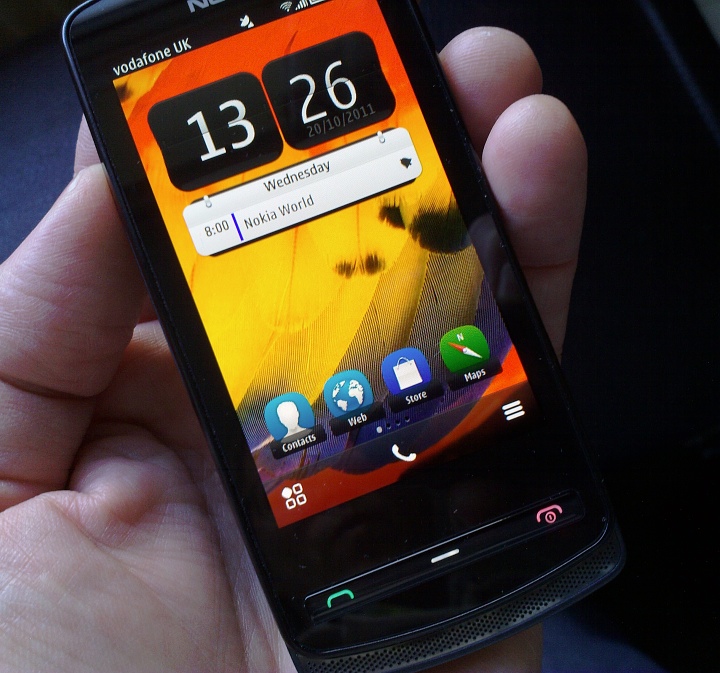 There's a widespread move across the tech media to compare every smartphone to the Apple iPhone - and this is something that Nokia has wisely chosen to stay away from. With the 700 especially, since it's a fraction of the size, weight and price. The 700's look is distinctly Nokia and even the slightly odd speaker 'chin' is something that a user might grow to like.

As All About Symbian readers, you'll be forgiven for giving the Nokia 700 a pass - I suspect that your attention will be drawn to the sister device, the 701, with a much larger screen, bigger battery, better camera, FM transmitter, and yet with the same high-spec internals. Or even to the even larger E7 or X7 (soon to get Belle too) or the camera specialist N8 (Belle, ditto). But do yourself a favour and go play with the 700 in a phone shop - even if it's not for you, it might be perfect as either a second/backup/pub phone or perhaps for someone else you know?

Steve Litchfield, All About Symbian, 11 November 2011