Back in May last year, I looked at Gameloft’s version of the family card game Uno. It impressed me then and even though it was coded in Java, it was solidly recommended. Now it has been upgraded to “HD”, is it still as loved. No. I love it even more! 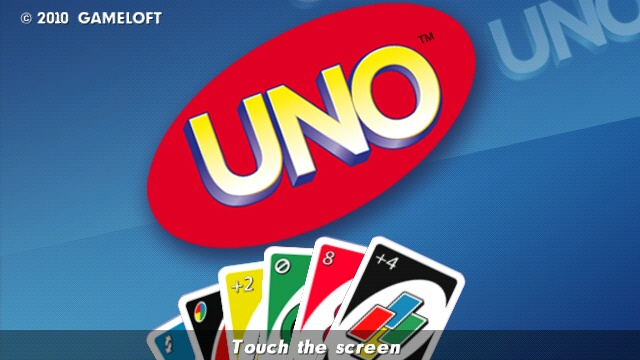 For those who’ve missed it, Uno is a commercial version of a million card games where players can play a card that matches either the numerical value or the suit of the card on top of a pile in the middle of the room. If they can't, they draw another card. Play continues until someone gets rid of all their cards.

Into this basic mechanism Uno throws in wild cards (so you can change the colour in play – colours are used instead of suits), penalty cards to force your opponents to pick up extra cards, miss a turn and reverse the order of play. All pretty basic stuff, but all well balanced to make a game that has a fair bit more skill than it would first appear to have. 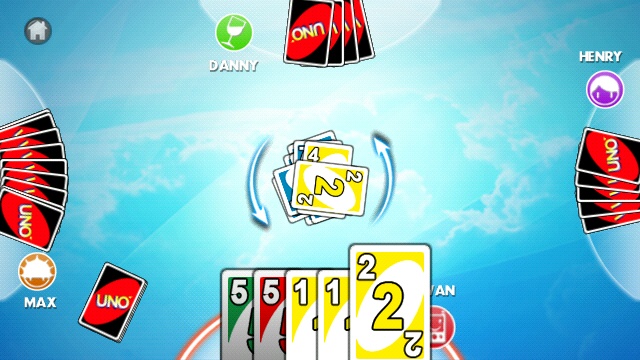 While you can go ahead and set up a quick game (choosing which of the rules you wish to play with), the real longevity is in the tournament play. With varying numbers of computer opponents taking you on, through all the rules variations, you have fifteen different “rounds” you must win to progress to the next – luckily you get up to five chances to win each round. As the victories rack up, you’ll win jigsaw pieces, new desktops (for inside Uno, not on your phone in general) and different graphics for your icon/avatar. It’s a subtle way of adding in a collecting element that isn’t needed, but which makes for a nice diversion as you continue to play.

The challenge of the game is always there, no matter these extras.

The biggest difference to the HD version over the java implementation is the addition of the touch screen and this makes a huge difference to the game. It’s far easier to flick through your cards and toss one onto the pile in the middle of screen with a few flicks of your finger than using a cursor/d-pad to do the same. That alone upgrades the user experience. 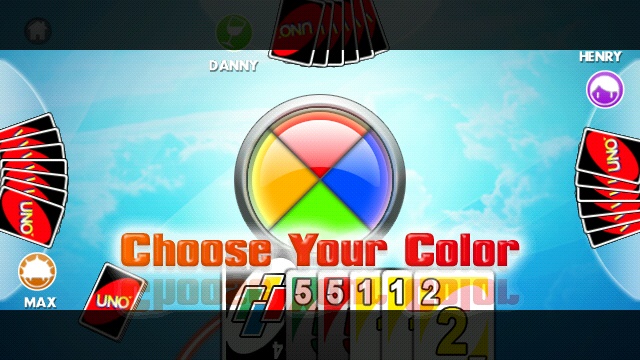 The graphics have had a bit of a spruce up as well – I suspect there are some very large vector graphics that Gameloft scale down to the screen size required, so QVGA on the Java version reviewed previously will be small and clear, and on the the 640 pixel width screen of the Symbian^3 devices they’ll be relatively the same size, but have more pixels making up the card image.

With that little bit more room to breathe, the cards are even sharper and easier to read. With the move to native Symbian code, there are a lot more animation and effects going on here, and that makes the game feel more real. Cards flip over and slide around rather than just appearing in the middle of the table, everything has smooth animations, and it just all feels right. 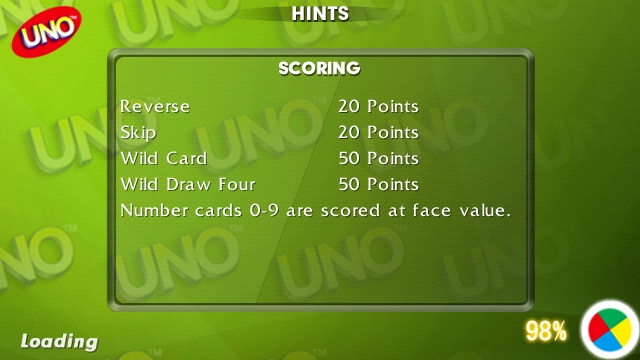 Finally, the sound, with the background music and in game effects available at different audio levels. I can finally have the game sounds playing and the in-shop muzak is banished! The sounds are all clear and crisp, the shout of “Uno!” when one player has a single card left rings out proudly, and best of all,  the “You Win!” exclamation sounds just like the announcer is congratulating me personally.

Let me quote from the end of the review from May 2009:

Uno is really, really great, though. I'd love to see an S60 native version that would accommodate play over Wi-Fi, improved audio, and perhaps some of the lag removed when moving between screens. But that would be icing on the cake. This is staying on my phone and is going to be played for many, many months. 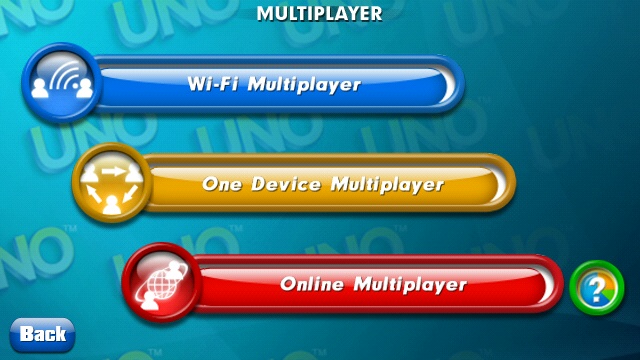 It’s not perfect (I’d love to be able to save a Tournament as it progresses by a method over than closing the app from the task manager) but Gameloft have taken a solid physical game and not only brought it to the mobile platform, but made the best use of what Symbian^3 has to offer over Java. The audio is improved, the lag has gone, and yes Wi-Fi (and online) multiplayer is available. Everything I asked for is here, and that means this is a very very happy reviewer. Totally recommended.