Music, podcasts, video, pictures... the Nokia C6-01 carries all the software to make it a pimped out portable media machine for the mid range market. But does it all hold together and make itself easy to use? In the third part of my review, it's time to look and listen to the Nokia C6 and what it can do. See also review parts 1 and 2.

Like other areas of Symbian^3 (the web browser being the next most visible example), Music player has received an update, but there are only superficial changes to what the user will see. The most notable is Nokia's visual album browser. Flipping through the album covers on the screen either in landscape mode or in the single album view in portrait move is an absolute revelation when you compare it to the S60 5th Edition handsets.

Quite simply because it's fast.

Part of that is down to the graphics chip handling the display of the album art (and given that the rendering needed to create the perspective view is a similar trick to skinning 3D graphics in a game, it shouldn't be a surprise that this is something that's smooth and reactive). I can only assume that the other main problem with the older handsets, the slow building of the scrolling lists of songs, albums and artist, has been optimised and benefits from the faster computing architecture available. That navigating music is no longer something that I have to make a conscious effort to do is a good thing. 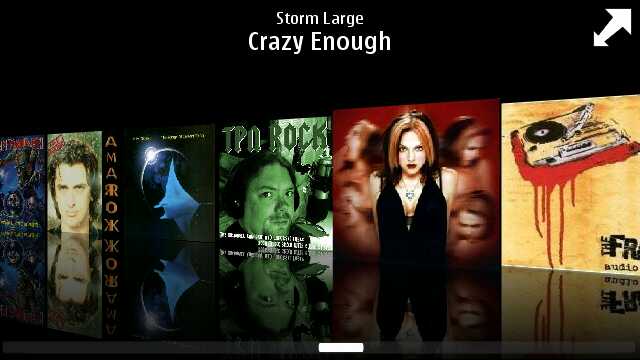 I like that the volume keys now work when music is being played back, even if the keylock is on, that's a good UI change in my book. I'm also relatively comfortable with Nokia's tweak to the views on offer and their combining of two standard views into one, namely “album and artist”. Given that the majority of music collections are based around albums, this is a smart view. Yes, it means you lose the alphabetised ordering of your albums, but having them now sorted first by the artist, and then the album, has made navigating my music collection a little easier.

What does cause problems with this view is that you must have the ID3 tag information on your audio files completed, otherwise the sorting just does not work. This is less of an issue nowadays than it was a few years ago, thanks to the proliferation of music stores that will have this stuff sorted out at the point of sale (and of course Nokia would love you to use the Ovi Music Store to load up the 2GB card the C6-01 is supplied with), but it still may be a concern.

And it's not perfect. Nokia are looking for strict use of ID3, especially for Album Art, so those of you who’ve been adding album art with other music managers (such as iTunes) may find that the images are not embedded in the file, but are meta-data in the folder. These won't be picked up by the C6 music software, so to your chosen ID3 editing solution you go.

It's also annoying that Nokia don't pick up the “Album Artist” field. As you may know, I follow a certain pan-continental singing competition [no, really? - Ed], and each year's song collection is available as an album. Some 40 songs, with 40 different singers, all under a single album name. On every other portable MP3 player, the artist shows up as “Various Artists” in a search, because that's what is listed in the audio file under “Album Artist” (“Artist” carries the actual performer's name). In Nokia's music browser, the named artist is not the album artist, but the artist whose name is on the first album track. It's just annoying that this is still a lingering issue.

Another issue, and while it's a bit more stylistic, it's also opposite to pretty much every other player out there. The word “The”. Music player on the C6 doesn't ignore it when alphabetically sorting lists. Which means “The Hollies” are filed under 'T' and not the more expected 'H'. 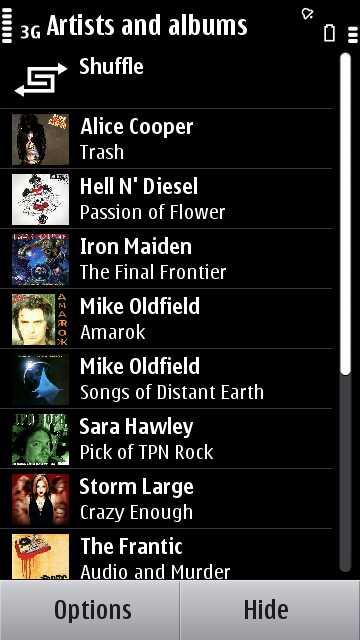 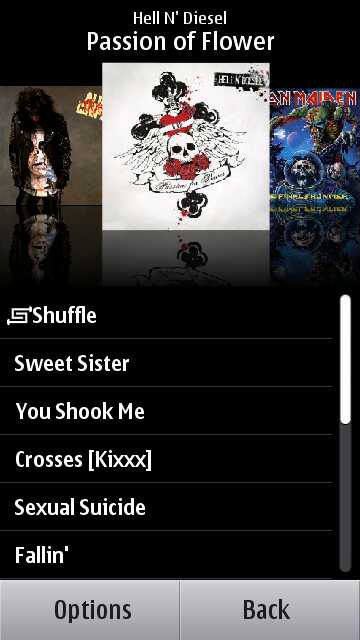 Little things, yes, but it's these things that can make a phone feel “weird” while being used. Yes, the music player is an improvement over the X6, 5800 and N97's, but it is still missing the mark in so many small areas. Attention to detail is needed for the next build of Music player. Alongside the second half of the podcasting system.

While there is no software to schedule or download podcasts in the C6, Music player still has an option to list podcasts (it's searching for “podcast” in the genre and title field – if it spots them, it puts the shows into the podcast list, and not the album/artist lists).

All the things you'd expect in a podcast player are here. It remembers where you where in a show, even if you go and listen to something else or exit the music app – it shows what episodes have been listened to, what you are in the middle of, and what is still new. In other words, as long as you can get podcasts onto the C6, the player will subtly adapt itself to serve up the different options needed to interface with them.

It's just that Nokia has ripped out the download client from the internet section of the device. Whether that's a concious decision or simply a feature that wasn't completed in time for the first consumer firmware remains to be seen. It's still a bit stupid. [Symbian Podcatcher replaces it pretty effectively though - Ed] 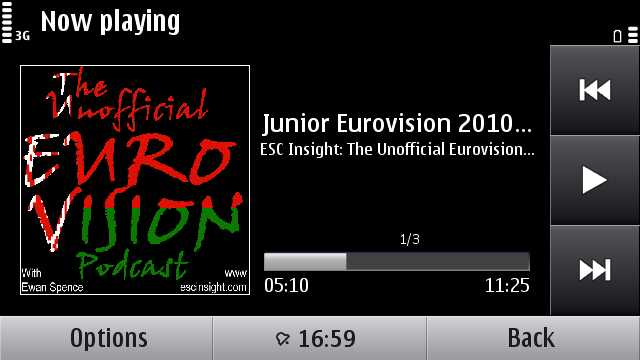 The Point and Shoot Camera

The Nokia C6-01 comes with the Extended Depth of Field camera, which in Steve's words "makes taking pictures almost foolproof". Well, almost. Nokia's software cannot help with composition of the picture, the available lighting, or shakey hand syndrome when you take the picture.

What it will do is make sure that every part of the picture will be in focus. It does this through using an asymmetrical lens, sampling the three different levels of colour (red, green and blue) on small patches of the picture, doing lots of complicated maths, and getting a sharp image as a result. Steve's taken an in-depth look at the system in this article here – and as it's also the same unit in the Nokia C7, Steve's look at the camera is also worth reading for even more background information.

Does it make for a less frustrating photo taking experience for someone not used to taking pictures? I think it does. In my case, it means trying to assess light levels and how the picture is framed. There are options to adjust the light sensitivity and exposure in the pop up icon screen, but I'll be honest, leaving it on automatic is good enough for me.

Do I do arty shots that need manipulations of focus to get a depth of field effect? Nope. Nor do I need to do really close up and intricate work with this camera. The C6 sits in my pocket for those quick snap moments, mostly of my family or a nice landscape view while I'm travelling. Given those requirements, a camera that can be pulled out, a long press on the shutter key to open the camera app, then another tap to take the picture, and I'm satisfied.

It's easy to see why point and shoot cameras are being sidelined by the smartphone - the C6 is both a simple camera to use and one that can give 'above average to excellent' shots, depending on circumstances. 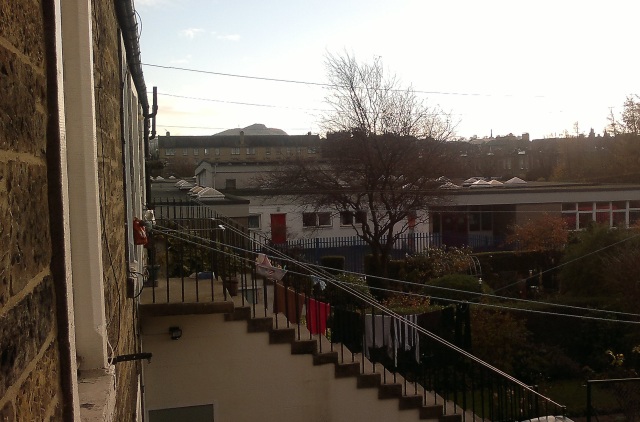 Lots of detail staying focussed, from the wall next to me, the school, and then the extinct volcano in the background

Alongside the stills camera, the C6 is also a 720p HD recording camcorder, and the EDoF technology really helps here to keep everything in focus. It's fast to react to changes in scenery from panning the camera and also has no extraneous noise from moving parts sitting over the audio track. Recording in H.264 at 25 frames per second, the C6 is a good solution for when you need to grab video – not everyone can carry around a Flip HD or more expensive video camera. The quality is some of the best on the smartphone market and for something that sits in your pocket alongside its other features (i.e. the classic one box solution), it's likely to be one of the biggest selling 720p video cameras in the world.

In terms of settings, there's not that much to go wrong. You can move the white balance away from automatic to reflect the lighting around you (Sunny, Cloudy, Incandescent light or Fluorescent light), add a colour filter, or move the recording to low light or night mode. Again, not much to go wrong, and Nokia have a lot of experience in getting the software right so it all just works without too much fiddling around. 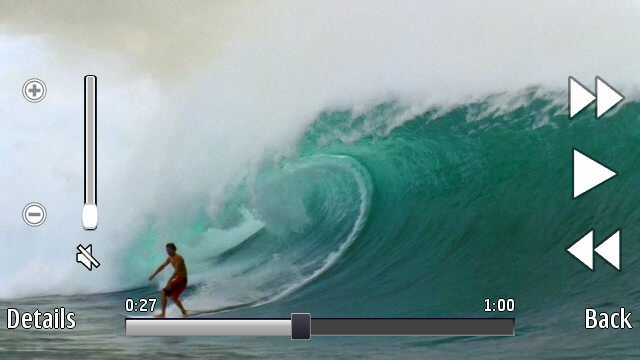 For video playback there's now a dedicated video icon, which has shortcuts to the last watched, last captured and “other clips” for everything else on the device, including any video files copied over from the desktop. Transcoding (changing one video format to another) can also be done as part of that transfer through Ovi Suite, so a simple drag and drop operation should be enough to load up the C6 with any video.

While the HDMI output that the N8 boasts is not present on the C6, you can still use the by now default TV-out cable (although you will need to source one as it's not part of the standard box). Which is fine as I don't have an HD TV, and the results on a regular TV are more than acceptable – streaming content from the BBC's iPlayer system, via the C6 and onto the TV might feel strange but it works, and it's a rather cute workaround to get a portable set top box.

The C6-01 has a competent portable media package. Maybe two years ago it would have been nearer the top of the list, but as it stands there are better options for each part of the package on offer (for example, sourcing video is something that iTunes still has a lead over, although the Ovi Music Player is now approaching iTunes levels for transferring music to the new Symbian devices).

But once you start looking at the whole package, including creation as well as consumption of media, the C6 starts to show how good an all-rounder it is. It can do everything to an above average level, and while it might not reach the dizzying heights in a single application (although the camera comes darn close) there has to be some compromise when you go for a smartphone solution.

The C6 manages all of its media duties admirably, it doesn't let the side down in any one area, and all of this is wrapped up in a stable software package that doesn't fall over when you ask it do everything at once. Which makes it a success in my eyes.