Possibly the most leaked (not by us, though) Nokia smartphone ever, the E75 finally got official just now after being introduced on stage at MWC, priced at 375 Euros. Billed as the best messaging smartphone ever and a direct descendant of the 9300i, the E75 has a slide-out QWERTY keyboard beneath a standard Eseries frontplate. Official images, videos, comment and details below. Being announced on stage, pic from Rafe! Interestingly, the E75 was billed as coming from the lineage of Nokia 9500 and 9300i, but the E90 was omitted - the E75 is seen as following on from the Series 80 devices. From my point of view, the use of the small screen means that the E75 rather misses the point of the classic 'Communicator' form factor, but this is a personal call... Still, Rafe reports that the 'industrial' design is very well done and that the mechanics are superb, so the jury's out on the E75 so far! 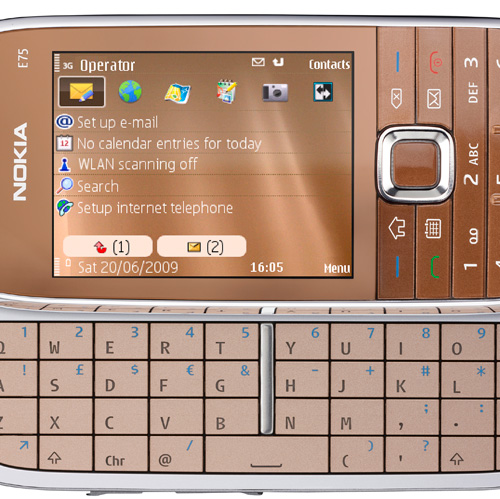 PS. Some videos of the E75, also courtesy of Nokia's in-house Conversations team: