SanDisk 64GB microSD for sale - but don't get too excited yet

SanDisk just announced a new range of microSD cards, starting at a monstrous 64GB. Dubbed 'Mobile Ultra', these cards use the SDXC standard, which is why you shouldn't get too excited yet - no current or announced Symbian smartphones or firmwares support SDXC. Official compatibility will doubtless come in time, through 2012, which will also give time for the card to drop to sensible price levels. But hey, it's the future, so worth bearing in mind. 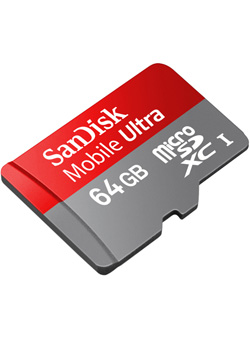 Existing smartphones max out at 32GB with the SDHC standard, which is why a new standard was needed. Obviously, SDXC is backwards compatible, in that an SDXC slot will happily read cards formatted as SDHC or even standard SD, so your old cards won't be obsolete come 2012 or 2013.

From the SanDisk product page:

Get faster performance and maximum storage for your photos, apps and Full HD† videos. With 64 GB capacity and transfer speeds up to 30 MB/sec, SanDisk® Mobile Ultra™ microSDXC™ memory cards are perfect for the latest microSDXC™-enabled high-performance smartphones and superphones - plus the included SD™ adapter lets you quickly transfer files from your PC or other SD™ enabled device - so you can get more out of your mobile device. Do more with SanDisk® mobile memory cards

Filed: Home > News > SanDisk 64GB microSD for sale - but don't get too excited yet