Running a web site FROM your Symbian smartphone

You may remember, back in 2007, a Nokia project called Mobile Web Server, the idea being to host a personal web site ON your Symbian smartphone? Unsurprisingly, it never took off, but the uber-geeky concept is still alive and I came across Sym*Insight here, a web site that's a little content light at the moment, but whose main claim to fame is that it's hosted on the developer's Nokia 808 PureView. Yes, you read that right, when you visit, you're pulling HTML content from this Symbian smartphone. Very cool, and he provides a breakdown of what to do if you want to experiment along the same lines...

This is all based on the app Private Server, in the Nokia Store, apparently free for the next week, so you might like to grab it while you can?

From the 'how to' article (again, hosted ON the dev's phone):

Back in 2009, Symbian S60v3 and v5 had a web server application created by nokia known as Mobile Web Server. Users were provided ad domain name of their choice and could host a website on their device for free. Users dint have to worry about registerding a domain name or updating the dynamic IP address of their device every now and then. All came in one tool. Unfortunately the service was discontinued by nokia. But now we have an app called private server which serves the same purpose, but not quite everything Mobile Web Server provided. Although there are other solutions for those parts missing in this app. Parts which can work along with the app in your symbian device to run a full fledged web server. The website that you are viewing now is hosted on my Nokia 808 PureView and in this review I will explain in detail how was this done.

Private Server 0.5 is available in the nokia store. The app recieved a major update earlier this month, the developer mentioning that the new version is powered with a new core and added features like folder handling if an index.html file is not present. The first step is to install this app to you symbian device (s60v5, Anna, Belle). Once installed, a folder named "httpd" is automatically created in your Mass Memory. Now whatever content you put inside this folder will be accessible through the internet, provided your device is connected to the same. You can test this by typing in the following URL syntax in the web browser of another device which too is connected to the internet.

"http://xx.xx.xx.xx/filename.yyy/" where xx.xx.xx.xx is your device's public IP address, and .yyy is the file extension or filetype. 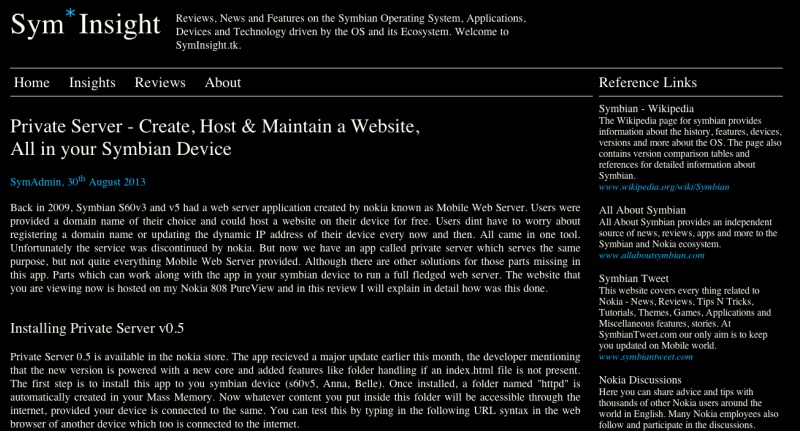 I should stress that there's upwards of 1000 words of explanation that follows, mainly on the trickery involved in routing traffic to a dynamically cell-connected smartphone. We're talking extreme geekery here, but kudos to you if you not only manage to read through to the end but also mimic the technique and get your own web site running on your Symbian phone. Let us know the address if you do!

Here's a small excerpt, to give you (somewhat frighteningly) an idea(!):

Since you have not yet set up a DDNS solution, you can give a random value as the name server URL and can later modify it to the actual name server URLs as suggested by your DDNS provider. Once you complete the domain name creation process, the same will be registered by the service provider (in my case, "www.dot.tk") within a few hours. Now you can move on to setting up a DDNS solution.

Setting Up DDNS and IP Updating

There are a handfull of Dynamic DNS service providers and only a few of them are totally free. The one I use for this website is "www.dnsexit.com". Sign up to this service and you can easily configure DDNS as per instructions given in the site. You must choose to use your already registered domain name while configuring this. You will be asked to enter your current IP address, which you can get by going to "www.whatismyip.com". After providing your domain name and IP address dnsexit will give you the URLs of its name servers which you will then enter into your domain registrar's configuration page, replacing the random value you had given earlier. For this go to your domain registrars domain modification page and select the option of using a third party's name servers and enter the name servers you got from dnsexit. Save the settings and you are done with all the configurations at the registrar's end.

Next step is to get your dynamic IP address updated to your DDNS service every time it changes. IP update agent softwares are available from all major DDNS providers including dnsexit, but none compatible with symbian and probably not with any other mobile OS. There is an alternate method in which, your DDNS provider gives you a URL containing feilds to enter your username, password and domain name and each time you run this URL in your mobile device's web browser, your current IP address will be updated to your DDNS configuration. You can get this URL from the DDNS Client download section at dnsexit.com.

Gulp. If you do try the site and it seems slow, then bear in mind where it's coming from. And if the site's down altogether then maybe AAS and its readers have brought the phone down altogether!