The pull of Real Estate, Intensity and Interaction

Steve tries to explain the lure of Apple's iPhone. How does the Symbian world compete?

So there I was, playing host to my sister. An utter normob, to use the current term. Her phone dates from 2004 or thereabouts and it was probably a budget model then. I thought she might be interested in seeing some of the current flagship and wanted to see her reaction. So I showed her my Apple iPhone iPod Touch and Nokia N95 8GB.

A day later, I did exactly the same to a fellow band member, whipping out both devices (appropriately, don't worry, I wasn't bible phone-bashing) and demonstrating them.

The reaction in each case was identical: tremendous enthusiasm for the 'iPhone' but significantly less for the N95 8GB, even though I helpfully explained (several times) that the Nokia could 'do more'. I've been trying to analyse the instant appeal of the iPhone and wondering what lessons the Symbian world can draw from it.

And, before you shout "Boring - we know all about Apple's user interface - usability, blah blah....", this article doesn't address usability or simplicity. UI factors only kick in once you start to use the devices for more than a few minutes - in the case of the two situations above, the user wasn't doing much more than holding the device - it was that crucial 'first impressions' scenario where viral enthusiasm is either generated or lost. 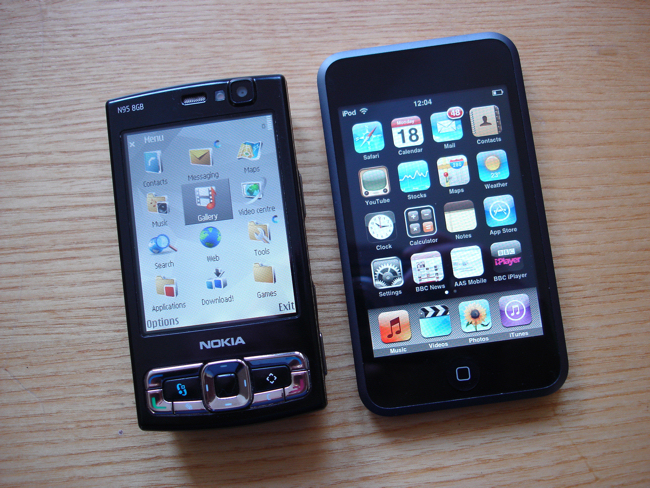 In the case of my Nokia N95 (or E90 or whatever I'm trialling or using at the time), the friend/relative generally gets bombarded by a catalogue of it can do this, it can do that - very impressive from their point of view, no doubt, in fact usually overwhelming, but I rarely see the light turn on in their brains that says 'I've got to have one of those'. Maybe it's that Nokia's Symbian phones do too much, maybe they are perceived to be too fiddly, maybe they just don't stand out enough physically?

It's been very interesting watching more positive first reactions to Apple's device. After much thought, I put this down to three factors:

Now, Nokia's sales remain very healthy, so there's clearly a lot of demand for 'phone-like' products. But I can't help thinking that winning the hearts, minds and eyes of normobs should be somewhere on the shopping list of Nokia, Samsung and other Symbian licensees.

Display sizes can be increased. Look at the jump from 2.6" to 2.8" in the N95/N95 8GB pair, without increasing the frontal area one iota. The Nokia 6650 I reviewed last week was immensely frustrating because of its screen size. In my mid-forties, I had to really stay still and concentrate in order to read text on its 2.2" display - and yet there was plenty of room the hardware for at least a 2.4" unit or even a 2.6" - which would have made a world of difference. The upcoming Nokia N96 and Samsung INNOV8 both have 2.8" QVGA screens - I know there are cost issues, but these should both have had 3" and VGA displays in order to create the same sort of impact that the iPhone makes.

Display brightness can be increased, surely. Nokia's deliberate crippling of maximum brightness in the Nokia N82 was rather telling, presumably to help battery life. A good motive, but if we're talking about making an impact then more and not less brightness is needed. Symbian phone displays need to shine.

The involvement factor is rather harder to replicate, although prettier icons and screen layouts can help. S60 touch-driven phones will arrive in time, although they'll need to use similarly innovative technologies to Apple if they're to have screens that stand up in terms of outdoor visibility. Can a Symbian partner pull this one off? I'm a little sceptical but prepared to be pleasantly surprised.

Steve Litchfield, All About Symbian, 18 August 2008