TV Out on the Nokia N95 - Part 3: Word Processing, Spreadsheets and PowerPoint on the Big Screen

The Nokia N95 can be hooked up to a television and full-size keyboard, and used in a similar manner to a desktop computer. In this article Krisse looks at the effect this has on productivity software and ponders how close we are to an office that you can carry in your pocket.

TV Out on the Nokia N95 - Part 3: Word Processing, Spreadsheets and PowerPoint

The N95, and indeed all smartphones, have obvious uses for businesses and other people who need serious productivity software: they offer the most portable possible computing resource, so that, wherever someone is, they always have something like a PC in their pocket. Of course this has traditionally been restricted by the size of the keypad or keyboard and the size of the display, which is why many businesses favour devices such as Communicators and Blackberries with relatively large screens and full (albeit physically small) QWERTY keyboards.

So, what happens when those restrictions are thrown out of the window by connecting a full-size Bluetooth keyboard and television to a smartphone? Well, we're about to find out...

We installed MobiSystems' OfficeSuite 4 (a Word, Excel and Powerpoint compatible application suite) on our N95. Just to emphasise, this article is not intended as a direct review of this particular software, but as a look at how the TV Out feature affects the abilities of productivity software in general.

Word Processing through TV Out on the N95

First up is the most traditional type of office application, the word processor: 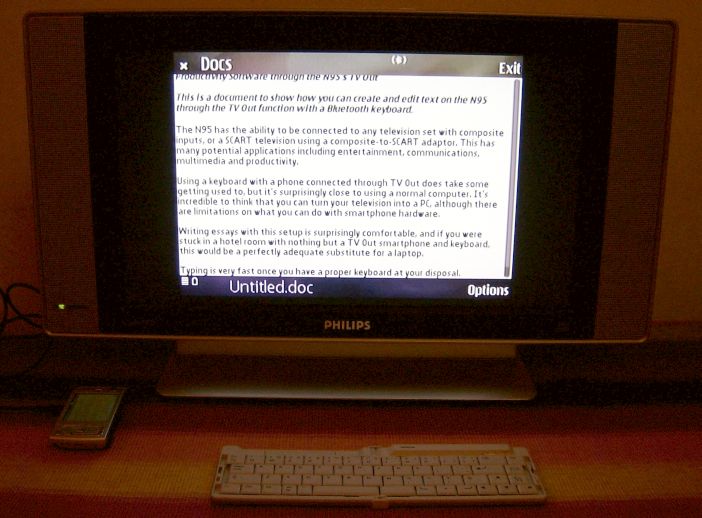 Viewing documents proved absolutely no problem at all, but during the viewing you come up against the first barrier of the N95's abilities: if you zoom in past 45% of the full size, the text starts to become illegible. The television itself and our eyes could have coped with much smaller text, but the phone's QVGA (320x240) output just couldn't go past 45% without making the text look tattered.

Editing text brought up an interesting snag: if you put the OfficeSuite word processor into edit mode with the N95 in horizontal mode, the screen would flicker quite badly. The effect was annoying enough to make text entry a struggle, although you could still do it if you persevered. There was no flicker if the phone was in vertical mode, there was no flicker if the application was in viewing mode, there was no flicker on the phone's own screen, and the flicker hasn't appeared in any other applications. Even weirder, the flicker could be made to stop if you selected all of the text while in horizontal edit mode. Clearly there's some sort of minor bug in the OfficeSuite word processing application's code which only affects the TV Out signal in certain circumstances.

What this bug illustrates is that the TV Out chip doesn't always reproduce the phone screen exactly, there are certain (apparently very rare) circumstances where the application code can interfere with the functioning of the TV Out.

It wasn't a showstopper however, because text editing was perfectly fine in vertical mode, although that mode does mean the text shown on-screen is physically smaller: 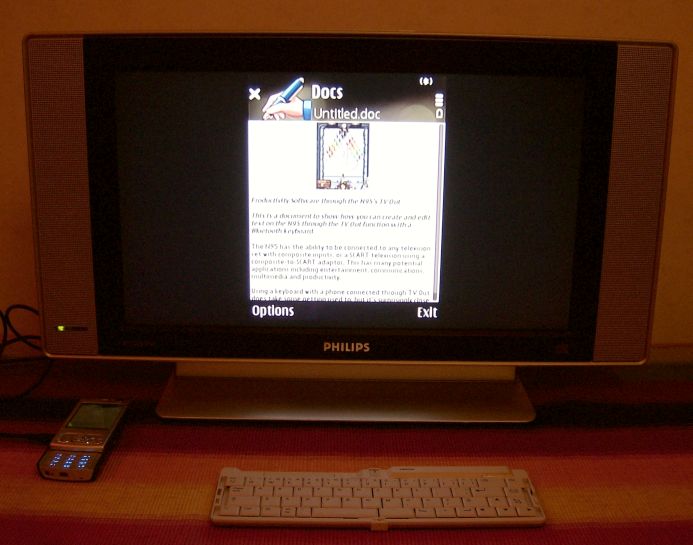 Overall, even at 45% zoom, there's a considerable amount of text displayed on-screen, and it's completely plausible that you could type a long document on the N95 using TV Out and a keyboard. While a higher resolution TV Out signal would help, the current resolution is definitely good enough for writing pure text. However, editing the layouts of complex documents containing pictures and other objects would be much more difficult.

Spreadsheets through TV Out on the N95 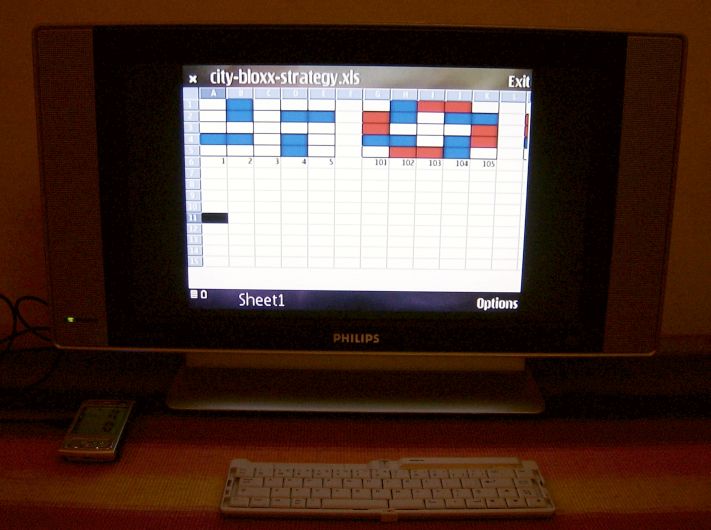 OfficeSuite 4's spreadsheet viewer and editor had no major problems, it displayed files at a wide range of resolutions and there was no flicker at all in any mode. The text and numbers within cells seemed to become illegible if you zoomed in past 50%, but that zoom level allowed viewing of a fair number of cells. Again, higher resolution output from the N95 would have made even smaller text legible, but 50% is also a "good enough" level for editing of simple spreadsheets without too many columns.

Scrolling was something of a pain, the application would wait a few seconds before registering the arrow keypress, and sometimes store up all the impatient keypresses sending the cursor off on a journey of its own even when you'd let go of the keyboard. However, this is more likely to be a fault of the spreadsheet application rather than the N95 hardware.

A mouse would have been very handy indeed when selecting cells, although the direction pad was good enough to get the job done.

PowerPoint through TV Out on the N95 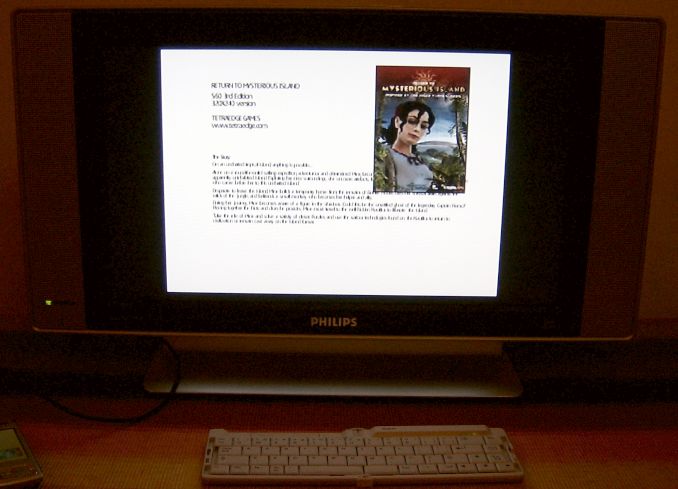 Viewing PowerPoint files on the N95 seems to be the weakest link. The problem doesn't lie with the viewing software, the problem lies with the N95's TV Out resolution of 320x240 pixels, which just isn't enough to display a PowerPoint presentation with any kind of small text. The only way to make a PPT file work well through TV Out is to use very large fonts, but if the PPT file is intended to be displayed on a very large screen at a meeting, then the large fonts will look bad. Larger fonts also means less text on each slide. 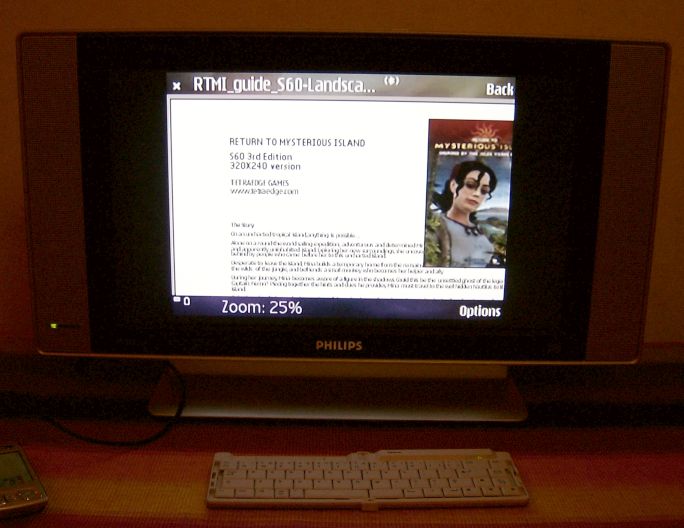 While you can zoom in on PowerPoint files if you want to read small text, this just spoils the whole slideshow concept of seeing the entire screen at once. It's a shame, because it would be great to properly preview PowerPoint files on a TV, it would particularly suit someone in their hotel room wanting to go over their notes before heading downstairs to give their big speech.

The potential of TV Out is to turn a portable device into a PC, and as far as productivity software goes the N95 is probably about halfway there.

For just writing text, TV Out on the N95 is great. Even at 45% zoom you can read a far far smaller text size than you could on the phone's own screen, and consequently you can see far more of the document at once. It feels very natural to write text with the Bluetooth keyboard/Television combination, and for 100% text-based documents this setup is a very adequate substitute for a laptop. For more complex editing however, such as documents containing layouts and illustrations, the low 320x240 resolution and lack of a mouse make word processing difficult.

Spreadsheet editing through TV Out on the N95 gets a similar verdict to wordprocessing: for simple files it's great, much better than the phone's own screen, and using the keyboard also feels very straightforward with spreadsheets. However, for complex spreadsheets with many columns the low resolution restricts how much of the spreadsheet you can read at once, and makes both viewing and editing awkward. The television itself could cope with higher resolutions, if only the N95 could output them, so there's clearly room for improvement here.

PowerPoint viewing just isn't suited to a QVGA resolution. 320x240 pixels force you to choose between two unappealing options: view the whole slide at once with the text illegible, or zoom in to read the text but miss the point of a slideshow.

There are three (perhaps obvious) lessons for Nokia to learn from these tests if they want their smartphones to be adequate substitutes for PCs:

- The QVGA resolution has to be increased, preferably to VGA, at least on the TV Out signal. The video playback application on the N95 can already output VGA and the photo gallery arguably even higher resolutions, so perhaps other applications could do this as well.

- Third party S60 application developers should be greatly encouraged to test their apps for TV Out compatibility, and be provided with all the necessary tools to do so. Not only would this reduce the incidence of things like the flicker bug mentioned above, it would also make the developers think about how their app looks and works in TV Out. It might even encourage them to include a special TV Out mode which automatically uses smaller font sizes, and places the horizontal mode soft key options at the bottom of the screen instead of at the side.

- Productivity software through TV Out could really, really do with a pointer such as a mouse. One of AAS's readers (who goes by the username PintOfAle) pointed out that most smartphones can already be used as optical mice thanks to the high resolution cameras they carry. There is already a piece of software which allows S60 phones to act as a PC mouse, and perhaps Nokia ought to add a similar application to S60 itself so that a phone can act as a mouse during TV Out mode.

Filed: Home > Features > TV Out on the Nokia N95 - Part 3: Word Processing, Spreadsheets and PowerPoint on the Big Screen