The Nokia N95 (just like the N93/N93i) has a TV Out ability which lets you plug the device into any television set. If you add a full-size Bluetooth keyboard, you get something resembling a desktop computer, both in appearance and function. In the first of a series of articles, AllAboutSymbian looks at whether the N95, or indeed any smartphone, can replace the PC.

Smartphones today are incredibly sophisticated, and can do most of the things that desktop PCs can, albeit a bit more slowly. The most common functions such as word processing, web browsing, instant messaging, email, spreadsheets, photo editing, video editing and multimedia playback are all available to owners of S60 (and other) smartphones, thanks to the processing powerhouse that resides in even the cheapest models.

Recently, partly driven by the launch of the iPhone, there's been a lot of talk about user interfaces. Some commentators have gone so far as to say that people actually buy phones purely for the interface, as if menu layouts alone can solve every possible problem a user might have. This writer respectfully suggests that the real problem most people have with using smartphones as computers lies elsewhere. Here's why: 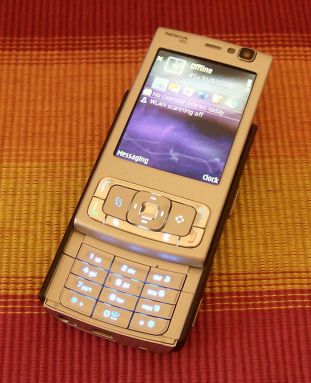 A popular model of smartphone. It has dual processors, a high quality screen, a multitasking operating system and a "full blown" web browser. But you try suggesting to the average computer user that they switch to a smartphone, and you'll get an earful about how tiny the letters on the screen are and how awkward the keypad is for typing essays, reports, emails etc. It would be the same response for any model of smartphone, no matter how well designed it was.

The on-screen interface isn't the problem, the physical size of the device is, and there's absolutely nothing that anyone can do about this.

Turning the N95 into a desktop computer

The first thing to deal with is the small keypad. Some devices have tried to solve this by building in tiny QWERTY keyboards of various sizes, or by using various predictive methods to guess at what you're trying to type. However, when it comes down to it, you simply cannot beat the speed and comfort of using a physically large keyboard: 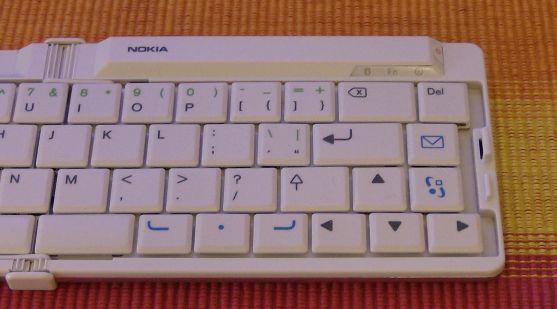 It's an improvement, but it's still not enough. The screen is too small, especially for people who have poor eyesight. Yes, you might be able to zoom in on some phones, but zooming in restricts your view of the overall document and makes editing or viewing even harder. The only real solution is to attach some sort of large screen to the phone, which allows anyone to read even the smallest font size properly: 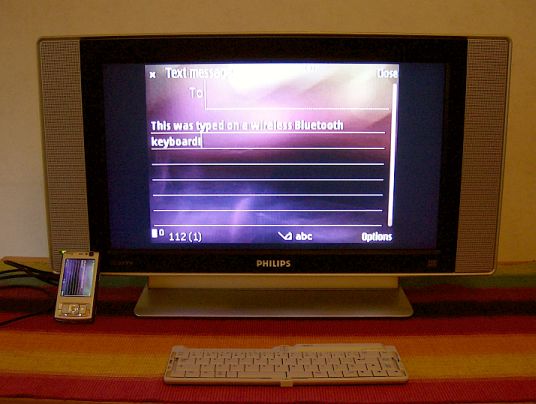 Note that the keyboard is wireless and controls all the functions of the phone, and the phone outputs its screen to the display. The phone's only function now is as a processing device, the user doesn't have to touch it or even see it in order to access all of its functions.

The keyboard can be used anywhere within a 10 metre radius of the phone, so, for example, you could type an email, or browse the web, or play a game, or edit a word document, without leaving the sofa. 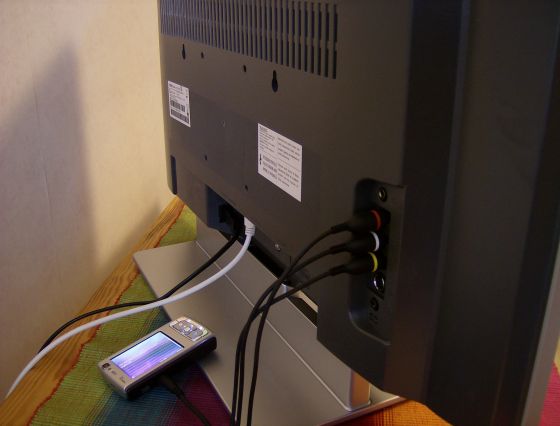 Setting up the TV Out connection on the Nokia N95

Both the Nokia N95 and Nokia N93/N93i plug into the composite connections of a television set. Almost all modern TVs have composite inputs, usually three pins that are yellow, white and red, although some older televisions may only have a SCART socket or (if they're VERY old) even just an aerial socket. SCART-only TVs can be used with composite plugs by buying an adaptor, which costs about 10 euros and can be found in any major electrical shop or ordered online (see the photo below).

The phone's TV Out can be set to automatically activate when you connect to a television, but the first time you use it you may have to activate it manually. On the N95 this can be found in Menu > Tools > Settings > General > Enhancement > TV-Out. When you click on the option, set it to default so that it activates automatically in future.

You can alter the settings by selecting Open, which lets you adjust the phone to suit the television you're using. TV Out supports PAL and NTSC televisions, and will also work on HDTVs in standard definition mode (the TV in this article's photos is an HDTV). The settings' Screen Size option (which stretches or squishes the phone's output) is a bit redundant on modern widescreen TVs, because they usually automatically switch to normal mode when receiving normal size video. It's only to be used if your widescreen TV stretches all video that it receives. There's also a Flicker Filter if you find that the image on your TV suffers from, well, flickering.

Once you've connected the phone and set it up correctly, you may also have to set your television to display the correct video source. This should be in one of the menus as AV (on most sets), as seen in the example below. 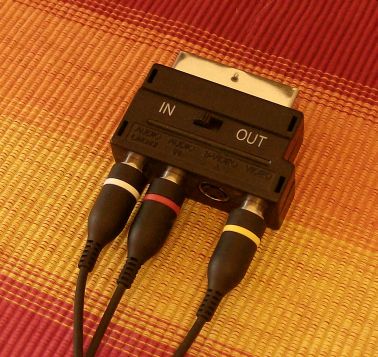 If your television has SCART but doesn't have composite inputs, you can buy a very cheap composite-to-SCART adaptor from any major electrical shop. 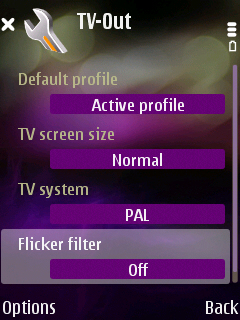 These settings should work on most televisions, including widescreen ones. 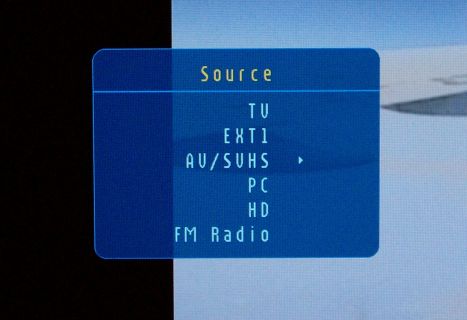 The AV option will display the connected phone's TV Out.

Using the N95 or N93/N93i with a computer monitor is more difficult, because most monitors don't have any kind of television inputs. You can buy a composite-to-VGA or SCART-to-VGA adaptor box, but they cost quite a lot (50 to 100 euros) and are quite hard to find in shops. Note that television-to-VGA adaptors should not be confused with much cheaper VGA-to-television adaptors: it's very easy to send VGA signals into a television (indeed most modern TVs have a VGA input socket), but much harder to send television signals into a computer monitor.

The N95: What (desktop) computing has become?

This article is the first in a series which will look in detail at how various different S60 applications function through TV Out, but for the moment here are some general impressions. The N95 as it stands obviously isn't good enough to fully replace a desktop or laptop PC, but perhaps that's missing the point. People buy a smartphone so they have computing power with you wherever they are, not because they want to depose their PC.

The classic away-from-home use often given for TV Out is still the best one: you're in a hotel room or at a relative's place and have no access to a computer, but still want to browse the web or write an email or play a game. Almost everyone in the rich world has a television set, and almost all rich world hotel rooms do too, so the TV Out effectively means the average N95 owner can use any home or building they visit as an internet cafe. The N95's support for 3G and 3.5G (HSDPA) internet speeds makes such a comparison even more valid.

In short, TV Out on phones may do to internet cafes what mobile phones did to public phone boxes: make them unused and obsolete.

Will the phone eat the PC?

But what if you're not away from home? Will there come a time when you literally don't buy a PC because you already have one built into your phone? Perhaps, and sooner than you might think.

The main thing you find yourself wishing for when using the N95 TV Out is that it had a higher resolution. Not necessarily a much higher one, but just enough so that you don't have to scroll sideways on websites, for example. Phones with TV Out ought to be outputting a higher resolution than they use on-screen, or simply increasing the definition of their own screens, as QVGA still looks a bit clunky on a large screen.

Devices like the Nokia N800 already have enough resolution (800x400) to fully display a website without sideways scrolling, and interestingly enough that's almost exactly the resolution of a Standard Definition widescreen television. If phones started outputting even more detail, at HDTV resolutions, then they would be operating at exactly the same resolution as a PC, bringing them even closer to replacing the home computer.

The second thing you miss on TV Out through the N95 is a pointing device, it's just not as nice to steer a pointer round the screen with arrow keys or a direction pad. The easiest and most portable solution would perhaps be a touchscreen, which you might eventually learn to use without actually looking down at the phone, just as people don't look down at their mouse pad. Alternatively, support for bluetooth mice would be very welcome, and would make it much easier to sell the concept of the smartphone as a home computer substitute.

If a phone did both of these things, outputted a VGA-resolution image and had some kind of pointing device, then it would raise questions about why people need a physically large computer at all.

Many casual users just have a PC for browsing, email, music storage and word processing, and from a raw computing point of view smartphones are now powerful enough to replace such a casual-use PC. The real barriers to stop that happening have been hardware ones: the lack of a monitor, lack of mass storage, lack of keyboard and lack of a mouse. However, with the rise of TV Out, high capacity memory cards, touchscreens and wireless keyboards, all of those barriers are fast disappearing. When a smartphone becomes good enough for most casual PC users' purposes, will casual PC users want a standalone PC at all?

Wouldn't it be easier to just plug your phone into any TV in the world that happens to be nearby, and surf the web while lounging on the sofa? Wouldn't it be convenient to be able to take your PC with you anywhere, and access its functions anywhere, even on the move?

As with all convergence, separate devices will always be better, cheaper and more reliable. But if people prefer converged devices, and if those devices do a good enough job, then people may start to use them instead of separates. Cameraphones have sidelined separate cameras (despite never catching up with separate cameras technologically), and perhaps one day smartphones will sideline separate computers in exactly the same way.

PS: You can see a video of the N95 being turned into a desktop computer in a special feature on the Nokia Duck blog.