Rafe reports back from a 'conversational briefing' with Marko Ahtisaari (Head of Design at Nokia) at Nokia's London Design HQ. There's an explanation of Nokia's "smart push", of how Nokia's three tier device strategy fits together, of how Nokia's software and hardware design teams have been brought together to promote a holistic approach and accelerate the pace of innovation, and there are hints of future design directions for both Symbian and MeeGo devices and software.

Yesterday I attended an informal briefing for journalists at Nokia's London design office with Marko Ahtisaari, Head of Design (SVP) at Nokia, about future design directions for the company. Marko recently rejoined the company; he previously held the position of Director of Design Strategy, before leaving in the summer of 2006. In the intervening time he was part of the team behind Blyk, the advertising funded mobile network, and co-founded Dopplr, a company which Nokia acquired last year.

Marko said he returned to Nokia because "there is no more exciting space [than mobile]"; he also pointed towards what has become animportant trend for the Nokia in the last few years - the ability to drive social change through technology. This desire, which, in part, springs from the company's Scandanavian DNA, cites Nokia's unmatched scale - 1.1 billion customers in the last two and half years (active device users) - as putting the company in a unique position to help promote and drive social change.

Marko set the scene by recalling the convergence trend of the last decade. How mobile devices have become a magnet for functionality - from the simple clock to the camera and GPS. For example, he noted, referencing Tomi Ahonen, that Nokia has around 1.1 billion cameraphones in active use - more that the total number of standalone cameras in history - film and digital combined. This trend will continue, giving ever greater access to an ever widening portfolio of technology. This is why Nokia believes in building in 'smart' right across their portfolio. 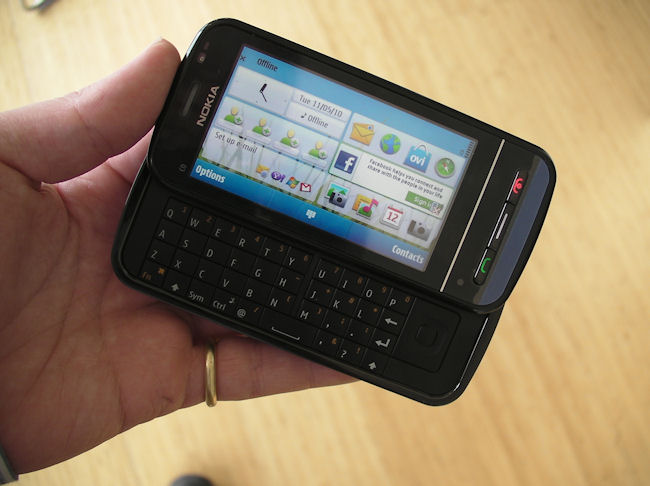 This 'smart' push can be found right across the Nokia portfolio. For mobile phones, Marko showed off the C3, with its QWERTY keyboard, showing functionality extending beyond voice and text into email and messaging. He showed the C6 as an example of how Symbian will be used to “democratise the smartphone” - giving more people access to the technology and services associated with such devices. Going forward, he suggested that Nokia's Symbian device design trends would see a retention of their current phone like form, with send and end keys and a focus on core mobile experiences.

By contrast, MeeGo devices, with the N900 serving as the example, would push the boundaries and bring the power of mobile computing to mobile devices. MeeGo devices will generally have larger displays and this is a large part of the design challenge and opportunity. Marko noted that he was putting the majority of his time into MeeGo devices and that the challenge was about "bringing a competitive experience on the glass to the market".

Services and their design are regarded as a vitally important area; it is "how software and hardware come together". Nokia has recruited a lot of people - "new DNA" - with a background in software and consumer services. Marko's background in web UI underlines how important Nokia considers this area, given that he is running the Design group as a whole. Services apply across all three Nokia devices tiers, but it is fair to say that MeeGo is seen as the place where they will "come together in a coherent way... and will be developed from there."

On returning to Nokia, Marko combined hardware industrial design and software design into a single team that is "better able to do holistic design" and will act as an "innovation acceleration mechanism". He also brings an emphasis on simplicity and attention to detail, which will be familiar to those that followed his philosophy at Dopplr. A focus on simplicity may mean doing "fewer things better, especially in software". Attention to detail means bringing the same attention to detail that Nokia's industrial design process has for its hardware to its software activities - taking attention down to the pixel-level.

Marko suggested that the whole industry is missing a trick with touchscreens; their UIs are generally immersive, requiring you to "put your head down to use them". Traditionally, Nokia has been good at doing mobile usage - one handed, blind (i.e. in the pocket) and momentary interaction (glanceability). The implication was that Nokia is looking at how these characteristics can be built into its large screen MeeGo devices. How might this be achieved? Audio interaction, haptics, off-screen display? Marko would not be drawn on specifics, but he pointed out it is important to use all the senses and clearly had specific future developments in mind. The key point here is Nokia is not just looking at catching up on the UI front, but believes its history in mobile design gives it the opportunity to take the next step - leapfrogging the existing generation of touch UIs.

The capacitive versus resistive screen technology choice was briefly touched upon, but Marko was unwilling to make definitive pronouncement. He did acknowledge that it was difficult to design a UI for both resistive and capacitive screens at the same time. My opinion is that we'll see capacitive screens on MeeGo and some high-end Symbian devices, with resistive screens on lower tier Symbian devices. However advances in technology and innovation in both hardware and software (e.g. Qt has enabled adjustable UI components size) will render this something of a moot point.

Later, when I asked about solving the inherent problem of screen size in mobile, Marko remarked that the innovation here will be about "how you deal with limitations" and that you need "look for other ways of displaying more". There are three potential areas - plug-in (as seen in the N8's HDMI out), projection and using other aspects of a product (that are not the screen) to display or indicate information (e.g. think of how the breathing light might evolve). 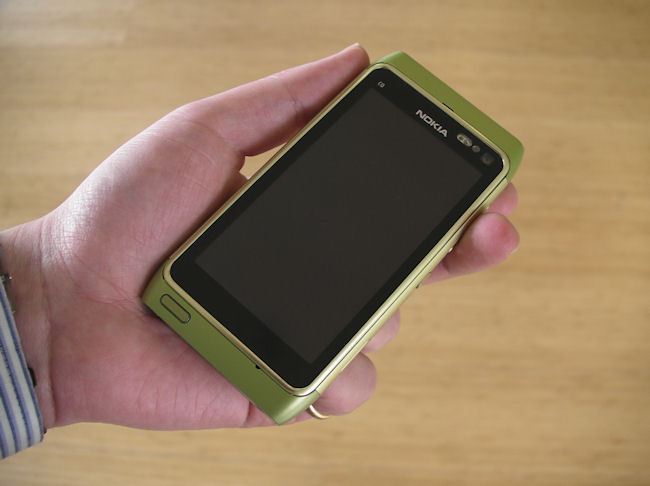 On the subject of on-screen keyboards, an area where Nokia is arguably significantly weaker than its competitors, Marko said Nokia was "paying a lot of attention to input" and that there are "more things we can plug-in" (auto-correction, intelligent dictionaries and so on). It is an area where "Nokia plan to innovate over time" and we'll see developments "soon". There was a clear implication that this would include the Symbian^3/N8 time period.

When I asked about where Nokia's design language is headed, Marko commented that "is not about buying into a story about how to live your life" or dictating particular tastes, rather it is about "choice and empowerment". This is reflected in Nokia's wide and global portfolio of devices and services. This cannot be done with a single design language, but rather an ethos of diversity, something which, in one sense, makes Nokia "more democratic" than many other brands.

What about the software design commonalities inherent in horizontal platforms? Nokia "needs to give more choice and allow users to make the UI their own". Theming will continue to be extremely important, but also customisation of the homescreen; changes are already due in Symbian^3, with more significant developments coming in MeeGo and Symbian^4. Individual applications, such as the recently released Own Voice, will also enable greater personalisation, but we are unlikely to see customisation of applications themselves (in terms of functionality). What about a device that intelligently customises itself? "Automatic personalisation is very hard", said Marko, and typically users "want to know when things are moved around... but there is potential here".

Towards the end of the session, in response to a question about the dominance of iPhone and Android in the 'innovation conversation' and Nokia's lackluster US presence, Marko remarked that technology discourse (in the media) is largely determined by what is coming out of the US. Nokia absolutely plans to make progress in the US market, and this is where MeeGo will play a role. He concluded that "when we are back there [in the US], we will be back in the conversation".

As a whole, the session was full of tantilising hints of the future; it was billed as "the start of a conversation". What emerged most clearly was Nokia's intention to move to a holistic design approach and accelerate the pace of change and innovation in the design arena. It's an area where Nokia has an extremely strong legacy, but one which, perhaps, it has failed to execute as successfully as it might have hoped in recent years. Quite how this will pan out in the future remains to be seen, but we will be bringing you the rest of the conversation as it happens.

Postscript: I also had an opportunity to see the N8 and C6 in their prototype form. More on this and some design specifics for these devices in a future post.