How to transfer files by USB cable between the Nokia 5800 XpressMusic and a Windows, Linux or Macintosh computer

So you want to transfer files onto or off your phone, and you have a Windows, Macintosh or Linux computer? Well the easiest and fastest method is to use the phone's microUSB cable, which is explained in greater detail in this tutorial.

The Nokia 5800's USB port is on the right of the picture, with the plastic flap lifted away.

How to transfer files by USB cable between the Nokia 5800 XpressMusic and a Windows, Linux or Macintosh computer

There are lots of useful things you can do on your 5800 by connecting it to a computer using its USB cable. For example you can transfer applications and games onto the phone, or transfer photos and videos off the phone.

Whatever you want to transfer, here's how to connect the 5800 to most kinds of computer (including Windows, Linux and Macintosh machines) using the microUSB cable that comes with it:

1. Make sure your computer and phone are both switched on. Also make sure your 5800 has a memory card in its slot.

2. Plug the small end of the microUSB cable into the phone's USB socket, which is under a plastic flap in the top left corner. (If you're wondering which way up it goes in, the plug's USB logo should be facing upwards.)

3. Plug the larger end of the microUSB cable into a USB port on your computer. It doesn't really matter which one you use, they should all work just as well.

4. On your 5800 it should ask which mode you wish to use. Choose "Mass Storage". A small trident-like icon should appear in the top right corner of the phone's screen indicating it's connected by USB cable.

5. On Windows Vista computers a window called "AutoPlay" may appear, in which case select "Open Folder To View Files" and a window will appear showing the contents of the 5800's memory card. On other operating systems you may see different messages, or you may see no messages at all. Whatever system you use, the 5800's memory card should show up as "Removable Disk D:", and it will be accessible from your computer's file manager.

7. When you've finished transferring files, DO NOT DISCONNECT THE CABLE YET! First, you have to make it safe to disconnect the cable. The method for doing this varies depending on whether you're using Windows, Mac or Linux, but they generally involve an option that says "Remove Hardware Safely", "Disconnect Safely", "Unmount Volume" or other similar phrases. On Windows you can do this by clicking on a small icon in the bottom left corner of the screen that appears when the phone is connected (it may look like a phone with a green tickmark, or it may look like something else). Clicking will bring up an option that says "Safely Remove USB Mass Storage Device", click on this option and then "OK". On other computers you may need to find the phone listed as "Removable Drive" in the file manager, and choose the safe removal option from there. You may also see the phone appear as a memory card icon, as it's the phone's memory card that's being accessed.

8. After you have made the device safe to remove, you can unplug the cable at both ends.

And that's it. If you want to transfer more stuff, just repeat the above process, and always remember to make the phone safe to disconnect before unplugging. 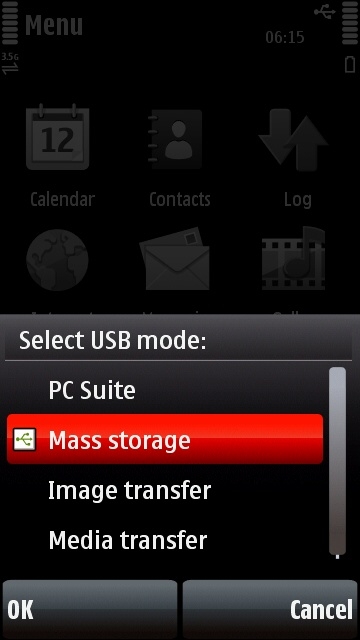 Choose "Mass Storage" from the USB connection menu when you attach your phone to your computer. Note that the USB icon appears in the top right corner of the screen when the phone is connected by cable.

Why do I have to select "Remove Hardware Safely" before unplugging the cable?

This precaution applies to all memory cards, memory sticks, external drives, music players, mobile phones etc that are connected to computers by USB cable in "mass storage" or "data transfer"mode. They should ONLY be unplugged after they have been made safe to unplug.

It's a safety precaution that helps to prevent damage to the phone's memory card. If the cable is unplugged while the computer is still accessing it there's a chance it may cause permanent damage to the card.

If you unplug without making things safe, don't worry, you probably won't have any problems, but try to remember next time.

Why do some operating systems say "Unmount Volume"? What the heck does that mean?

They're using nerdy anorak language. What they really mean is "Remove Safely".

Does the 5800 use a special kind of USB cable? Can I use a similar cable from another device?

Like many recent phones the 5800 uses a microUSB cable, which means it has a normal USB plug at one end and a teeny-tiny flat plug at the other. You can use any microUSB cable with the 5800, it doesn't really matter who manufactured it or where you got it from.

One thing to be careful about though, microUSB isn't the same thing as miniUSB. MiniUSB cables have a normal USB plug at one end, but a miniUSB plug is a bit larger than a microUSB plug, and they won't fit into each other's sockets.

The reason there are two standards is that MicroUSB is meant to gradually replace miniUSB over time. MicroUSB plugs use much thinner sockets, so switching to microUSB lets manufacturers make devices smaller. However, the transition between miniUSB and microUSB looks like being a long one, so for the next few years at least you'll see both kinds of cable being used.

What about Bluetooth file transfers?

The 5800 can also transfer files by wireless Bluetooth, but that's not covered by this tutorial. Bluetooth in general is more convenient in that it requires no cable, but it has many disadvantages such as being much slower than USB cables, and many computers don't have Bluetooth compatibility. Using Bluetooth also requires authorisation of connections, which can be a bit complicated.

File transfer by USB cable is the quickest, easiest and most secure way to transfer files between a computer and gadget.

Filed: Home > Features > How to transfer files by USB cable between the Nokia 5800 XpressMusic and a Windows, Linux or Macintosh computer