Graphics Acceleration: the Price of Progress? Let's hope not

Having heard many a user refer to 'upgrading' from (for example) a Nokia N95 8GB to an N85, I thought it worth examining an important way in which all is not necessarily positive when going from an older phone to a newer one.

Yes, the N85 has USB charging, the N79 has theme-switching backplates, the N96 has a DVB-H receiver built-in, and so on. But none of these, and, as far as I know, neither do the even newer 5800 XpressMusic and N97, have the same oomph under the bonnet as the 'classic' generation of S60 3rd Edition devices: the Nokia N93, N93i, N82, N95, N95 8GB and E90. All of these had dedicated graphics acceleration, thanks to the Texas Instruments OMAP 2420 chip used in their design.

Graphics acceleration is where a piece of software (e.g. a game) calls a standard OpenGL routine (to calculate and draw a particular 3D vector, for example) and, rather than the main phone processor having to do all the sums long-hand, the built-in graphics hardware, built from the ground up for this sort of job, leaps into action and does the work in a fraction of the time.

The end result, for the user, is that many games (e.g. Oval Racer, FIFA 07, Quake, Global race, Crash Bandicoot, Panda Manda, Knights of the Dark Age, to name a few) run smoother and faster, videos play back with no glitches (handling a wider range of resolutions and bitrates without stuttering) and graphics-heavy applications run without problems (e.g. Mobitubia, the YouTube client can play back videos smoothly at the same time as downloading them as fast as possible). 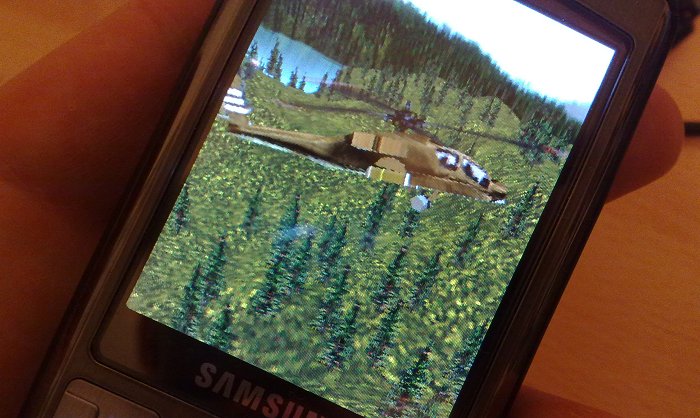 It might help to put the scale of the difference into some sort of numerical perspective. Running SPMark, a standard benchmarking tool, on the Nokia N82 (as representative of the 'classic' line, e.g. N95), the N78 (as representative of the latest non-accelerated S60 3rd Edition FP2 phones) and the N96 (different in its own way since it has a STMicroelectronics chip that's dedicated to audio and video playback), we discover the following scores:

The helicopter demo simulates a commercial game pretty well. Run Oval Racer, for example, on your chosen S60 handset, and you'll see very similar frame rates to the SPMark test. On the N82, N95, etc, the game's gloriously smooth, with textured graphics right, left and centre. On the N78, N79 and N96, etc, it's sluggish and much, much less fun.

Why has Nokia changed the chipset they're using for their top end smartphones in such a detrimental way? With games and multimedia being hotter than ever in the handheld and phone world, surely more graphics power and not less would have been the way to go? The N95 has almost TEN TIMES more graphics power than its successor, the N96.

So far, RealPlayer has been tweaked enough that many users many not notice that their phone is underpowered, and N-Gage games have been written specifically to not depend on the presence of hardware OpenGL acceleration, i.e. they have been written to the lowest common denominator. So few people have noticed that the Emperor's not wearing any clothes.

Nokia will of course say that the internals of their phones were changed because of cost issues, it's all about building to a price and a specific market segment. But I have a feeling that, in the face of competition from the graphics-accelerated Apple iPhone, this chipset downgrade decision will come home to bite Nokia where it hurts most.

Is it too late to stop the rot? I hope not. I really, really hope that Nokia are even now preparing a flagship or two with just as much power as the Nokia N93 of over two and a half years ago and the N95 of 20 months ago. Care to comment on all this, Nokia? Is it too late to solder in a graphics chip into your 2009 flagship, the N97?

So, performance that's not quite as good as that in the 'classic' Nokia S60 phones, but within striking distance. For one thing, the OMAP 2430 isn't quite as capable as the 2420, and we also perhaps have to factor in that the i7110 and all Samsung's other S60 phones are on early firmware - there may yet be optimisations to come... But still a heck of a lot better than any of Nokia's hardware from 2008/2009.

PPS. See also http://www.glbenchmark.com/result.jsp?orderby=dvsg_best&brand=Nokia&submit=OK&benchmark=glpro , a test from some time ago that also shows the extent of the problem and the extent of superiority of the graphics-accelerated phones.