There were a lot of smartphones around at the recent Symbian Smartphone Show, and lots of people who had them in their pocket. Ewan decided to find out what people were using, and approached Symbian CEO Nigel Clifford to be our next guest in our 'Desert Island Desktops' series...

Before the big reveal of the applications used, have a think. What would be on the active standby/desktop screen of Nigel Clifford, CEO of Symbian? Before that, actually, what phone do you think he's using as his regular phone (as opposed to the latest handset from one of the partners)?

Well, it's an E61i. And the icons on the standby screen all look horribly familiar. There's the Messaging Client, Calendar, Calculator, Web Browser, Alarm Clock and 'New message'. The only move away from the default is Worldmate, a Swiss army knife style application for the frequent traveller (reviewed here). Why the lack of change from the out the box version? 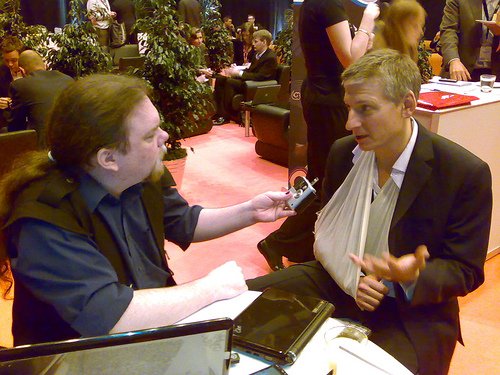 "Customising [each device] back to any preferences is a lot of effort", explains Clifford. As one of the most visible points of contact for Symbian, he goes through a lot of devices; and to illustrate that point he lifts the latest Samsung phone out of his jacket pocket. "I'm happy and familiar with the default, so using that is fine by me." Unspoken of course is the principle that Clifford can pick up any device from the Symbian partners, and not make the sort of error that would haunt comedy YouTube clips for ever more.

But of course Clifford doesn't restrict himself to the default applications throughout his E61i. "It may be all standard here" as he waves at the desktop, "but go into the install folder... That's where the key applications for myself are."

Looking at his choices, it is obvious that Clifford is a well travelled man. Worldmate is here again, alongside a number of other travel applications. Metro is a guide to Underground systems around the world (over 350, at the last count, can be loaded into its database), but this E61i currently has just London - which is arguably one of the most complicated underground metros in the world. Telmap connects to an external GPS for navigation and route planning, while A to Z Maps provides more geographical information.

Moving further afield, Google Maps is available for wider navigation as he jets around the world, as are two applications to keep him in touch with the world.

The first application is Reuters, providing a single link to the news stories of the day, and of course is predominately a web browser based application. The second, a YouTube client, shows a touch of insight into Clifford - what was the last YouTube video that Nigel had watched on his device? "Probably Hussein Bolt running the 100m at the Olympics" comes the reply, after a few moments thought. Clifford did reference this event in his keynote at this year's Symbian Smartphone Show. What attracts him to that sporting event? A keen follower of athletics? "Yes, and certainly people who are re-writing the rules as they go along." Much like Symbian has done since its inception some ten years ago.

Finally there is Wireless Presenter, a bluetooth 'clicker' for PowerPoint that allows you to control a presentation from your handset. How often does this get used? "Counting internal and external meetings, I probably do an average of one presentation a day", points out Clifford.

Many of his applications have a hint of cloud computing about them, where the data is held online, and the smartphone, with its internet connection, is used as a client to access and manipulate the data. This makes it easy to switch devices without having to move applications, settings and data around - and means you have the latest data available to work on.

But what isn't on Clifford's phone? After all, he probably knows enough Symbian programmers that he could have any application he wanted if he asked nicely. So if he did have that magic wand and could have any application, what would it do? Not surprisingly, it's a cloud-like application to help a single user with multiple devices. "UPnP development is something I'm interested in," he explains, "and I'd like to be provided with the music and photos that support my life and make me feel good. Items like pictures of the family, videos of the children and music tracks. When you get a new device, you get a nudge and asked if you want that 'loaded up' with your favourites. A sort of zero configuration wrapper of your life."

So if you're reading this and looking for a new project...

It's clear that there are multiple ways to use your smartphone, but staying away from the desktop, being active while you are out and about (be it while away from the office desk for an hour or so, or presenting around the world) is key to how Nigel Clifford uses his smartphone. It's a very much connected experience. 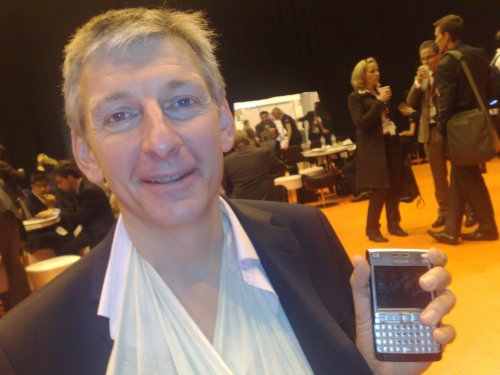