David Wood has seen through every stage of the Symbian project, and been involved with its predecessor, Psion, since the early days of the PDA. Now, as the Symbian Foundation approaches, I sat down with him at the recent Smartphone Show to find out what has changed over the years, some of the touchstones in operating system designs, and also what applications he has on his smartphone.

Starting with Nokia's purchase of Symbian, and the resulting creation of the Symbian Foundation (legal hurdles not-withstanding), does Symbian's current EVP of Research know where he'll be working in the next year? Naturally he's playing his cards very close to his chest. "I am attracted to the work at the heart of the Symbian Foundation but there are roles in Nokia Research, and Nokia as a whole, that are just as appealing."

Wood was there at the genesis of what is now Symbian OS, with Psion's EPOC Operating System (that powered the Series 5 range). How much of that OS is present in the current version, some nine years later? "A lot of the same [design] principles exist, and of course a lot of the same people are involved, both inside Symbian and in the larger ecosystem. But there is clearly a historical continuity of passions of usability and of taming technology, rather than having the technology try to tame the user. We love technology, but we want it to be a blessing, not a curse."

Of course, there's a lot of code and effort behind the screen to help do that taming. There are a number of manufacturers and developers working on various mobile operating systems, and that might give the appearance that the OS is something simple, especially when it is placed in a small device with just a few buttons and a screen. "In a way that's good," points out Wood.

"People should not be confronted by the complexity of a device, and they shouldn't be thinking 'this is doing terribly complicated things, it might fall over and fail.' Young children take years to learn to walk before it becomes second nature, and then it happens as if it was easy. Software should act in the the same way, as a smart nervous system. It should not be spilling through to the awareness of the user." 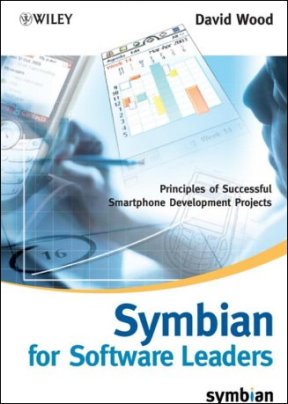 Wood's desktop/standby screen on his E61i has a mix of the regular S60 applciations (Agenda, Web, Gallery, Bluetooth and Connection Manager), and three third party applications. Google Maps and Google Mail (as an aside, Google Maps seems to have popped up in the majority of our Desert Island Desktop interviews so far...) and the main dislay just shows his Blackberry mailbox. The real additions to the device are in the main Applications screen and show Wood's true colours. Standing out, along side a YouTube client that "I don't use", are the Ruby and Python interpreters. The increase of popular runtimes for developers is something that he can see continuing.

"The key thing is that the most productive developers are happy developers, using the tools they like. Make them give up that tool and they will be a lot less productive of their time." Wood also oversaw the 'Runtimes' panel at the Smartphone Show and he was asked there which would be the winning runtime. "Simply, there will be no one winning runtime. Developers will continue to choose the tools they like to use, although there will be some areas which have good support from a certain tool."

The final point of interest in the E61i is what is under the programmable app key. "Opera Mini", is the reply. Not the built in Web browser? "No, because Opera Mini is faster. The built in browser takes two passes, one for the html and one for the CSS and sometimes this takes too long. Often some text will appear, and the rest of the text waits on the CSS reloading, which then reformats the page. And it takes a lot of memory."

"It was my son that said I should try Opera Mini. I'm not a 'mini' kind of guy, but I find it fast because all the processing is on the server side, and is then pushed down in one pass. Some things it misses out, such as italics. And editing is sometimes not as smooth, but I can put up with those minor annoyances for the speed. Most of what I consider as applications are actually web-based applications, so Linked In, BBC News and Facebook are there."

Thanks to David Wood, Symbian's EVP of research, for this interview. He writes frequently on the Symbian Web site (Symbian Insights) in addition to his posts on his personal blog, http://www.dw2-0.com/.