Penrillian specialize in Symbian OS application development and porting and are experts at helping clients to imagine, to specify, to build and to launch software running on Symbian OS. Ewan cuaght up with Charles Weir to find out just what this UK company are up to in the Symbian OS world. You can keep your high profile software companies churning out amazing looking graphical games, and visibly driving Symbian forward while gaining a huge amount of press and adulation… but that’s not what makes a platform last. Good solid applications for inglorious tasks make up the mainstay of a platform’s success. Companies who’ll write the applications your Network wants, and then sit quietly in the background, happy in the knowledge of a job well done. One of those companies is Penrillian. I sat down with Charles Weir (their Managing Director) to find out what makes this UK based Development House special.

First of all, why Penrillian? Does it have any meaning? "Of course it does," Charles answers happily. "We're based in a great part of the world, Penrith in England's Lake District. We like where we work, and the company name reflects that." So what do you do? "We make software work on Symbian OS. Our team has a deep understanding of Symbian OS and the smartphone market, so we deliver outstanding technical solutions. We're also very good at working closely with our clients to translate their requirements into intuitive new products."

"We have an eight person development team, all with significant Symbian OS experience. Among our staff are some of the people responsible for defining the smartphone as we know it. Most of us have also worked with other mobile platforms or on microprocessor development. This rich skill set is one of our corporate strengths, not just because we can manage software development and ports across different platforms, but also because it gives us a powerful set of problem solving skills."

So hired guns essentially then, but with very accurate guns. Is there anything that Penrillian is particularly proud of? "One particular expertise is porting", Charles explains. "Clients come to us with an application or technology which they need to deliver on Symbian OS, and we work with them to provide an efficient and compelling implementation. Other clients may have a great idea and need our technical expertise to bring it to market. We work with them step by step, delivering new working versions each week, and adapting to new priorities and ideas as they arise. This interaction has proved a terrific spur to innovation, and we've helped realise several new products that will revolutionise the user experience on the mobile handset."

Which is a great little mission statement, but have Penrillian actually put that into action? "Many times yes, but as we’re the technical brains behind the scenes, you might not realise it was us!" Any project you can talk about Charles?

"We've worked for some time with T-Mobile Traffic, a division of T-Mobile, developing their NaviGate on-board navigation software. This started as a port of a Pocket PC implementation to Series 60, then to UIQ. The initial implementation was tricky, as it required robust Bluetooth and network connections, and these work very differently in Symbian OS from the Microsoft Windows platforms. Over the last 18 months the software has developed further with several exciting new features. It's now a mature product, and one we're proud to be associated with."

Penrillian isn’t restricted to just Symbian OS – you can work in all the major mobile platforms. So how well does Charles think Symbian stands up against Palm and Microsoft?

"Symbian OS was designed from the start as a mobile connected operating system, whereas Palm OS and Windows CE were designed for PDAs and, in the latter case, derived from a desktop OS. This means that Symbian OS was designed for robustness (a phone should not need to be rebooted), long battery life and pervasive connectivity. So, for example, Symbian OS had full multitasking from the start, where Palm has only recently introduced it. Symbian OS applications were designed for phones from release 6 onwards, whereas Palm and Pocket PC applications are still based around PDA concepts. And the Symbian OS programming style emphasises error handling and power management, while the PC programming style has made early Smartphone implementations unreliable and power-hungry."

"Ah," I think to myself, "maybe now we can get an idea about what the industry wants from their smartphones, rather than listening to the manufacturers. Let’s see if we can find out how the various Symbian platforms are performing." So, Charles, in terms of porting and demand, what are companies looking for? Is Series 60 or UIQ the more popular 'programmable' platform?

"Our clients want effective and robust solutions to reduce their time-to-market. Sometimes they want us to put together a proof of concept application, sometimes it’s porting technologies from other platforms (be it full applications or some core engine technology), or even porting between various Symbian OS UI variants."

"Series 60 is currently proving to be the more popular platform. We tend to find that mass-market applications will target Series 60 first, while more specialised business applications may initially target UIQ. This reflects the different types of users, which the two platforms attract. Ultimately, our customers want their application on as many handsets as possible, which means that we need to ensure our code is portable across Series 60 and UIQ.

And do you see a consistent demand for one of those Operating Systems in the world, or can it vary by region? "Oh vary by region definitely. Our North American customers tend to have a background in Palm OS and PocketPC PDA applications and need our expertise to move these to Symbian OS - and, often, to make them Internet-connected as well. Our European customers are more likely to have technologies that are already portable, and for these our task tends to be adding a UI and integrating them to work with other Symbian OS applications and components." 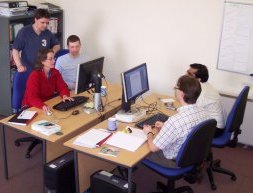 Let’s focus on some Symbian OS issues… firstly, programming languages. Which is better for Symbian developers, C++ or Java? "We believe in using the best tool for the job whether that is C++, Java or some other tool - although it is fair to say that most of our Symbian OS projects turn out to require C++. Java's great strengths are its speed of development for producing prototypes, and its cross-platform capabilities. However, the real value of Symbian OS devices lies in the rich capabilities of the handset, and the way applications can integrate with every aspect of the platform. For this reason, many of the best platform technologies we have worked on can only work effectively in C++.

Symbian OS 9 is going to be bringing the issue of certification and the Symbian Signed program to a more prominent position. What does Charles think of Symbian Signed? "We support it very strongly. It's by far the best thought out of all the signing programs we've encountered." I’m not sure that’s saying much, given the debacle Microsoft and Orange had when they launched the SPV! One of the aims of Symbian Signed is to prevent the spread of malicious programs or Trojans. Charles continues. "Given the recent media coverage of various Trojans targeting Symbian OS phones, it's inevitable that operators will want to start allowing only Symbian Signed applications. For example, Vodafone already ship their Nokia 6630 handsets with this as the default, although users can disable it."

"The Symbian Signed logo is valuable in giving consumers confidence that the application they are buying is trustworthy. Ultimately, this can only serve to increase the demand for applications on Symbian OS devices."

One of the features of Symbian Signed is that companies can take the onus themselves to test and sign applications, in effect self –certifying their own applications. What benefits does this program offer Penrillian? "The obvious benefit is that we can offer clients an end-to-end solution; software we deliver is ready to deploy immediately. The whole process is very streamlined to minimise impact on delivery dates."

"We are very careful to maintain the independence of our internal test team. Signed software from Penrillian is thoroughly tested to ensure that it will interoperate reliably with the platform. We're very excited to be able to offer this benefit to our customers."

I’ve had an evil thought… let’s ask it. Could you write a really good Trojan program for Symbian? "We certainly could - though we certainly would not! We find it much more fun working around the operating system to integrate complex functionality into existing applications. A Trojan 'in the wild' is a possibility at the moment, though we believe most people currently using phone software are relatively sophisticated and so such a program is unlikely to spread." So I wonder if that mean’s the first virus is going to be powered by stupid people?

"For the future, we believe the signing model is probably strong enough to prevent both Trojans and viruses. On existing phones the Symbian OS security model is based on keeping rogue software out, but once in, it is allowed free use of most handset features. With Symbian OS 9, things will become more difficult for rogue coders as the platform moves to a security model where unsigned applications are restricted from potentially troublesome activities without the user's knowledge."

It seems that the development houses I’ve spoken to all have a side project, an application that they have in the open that anyone can see. Penrillian has SymbianOSUnit, an open source testing suite. What is this used for? "It’s an automated unit test framework. Typically, our developers write tests for functionality before the code is written. As the project matures, this produces an ever-larger battery of automated tests, which enables us to thoroughly regression test our code when we make changes to it. This is an important facet of our eXtreme Programming development methodology, and it does wonders for the reliability of our products."

And finally where do you see the future for Symbian OS, and as a result, Penrillian? "We see the future of Symbian OS as moving even further into the mass market as mass-market handsets become more powerful and users demand more sophisticated features. At the same time, our recent experience tells us that ease-of-use will become ever more important as operators seek to drive ARPU by promoting more advanced services to users."

"We see this as an exciting growth market. We will expand Penrillian's capabilities and strengthen our presence within the smartphone ecosystem. We aim to do this whilst maintaining our strong client-focus and reputation for excellent in-depth knowledge of Symbian OS."