Ewan's been out speaking with Charles Revillon from Gamelfot, one of the big companies involved in mobile gaming. What do Gameloft think of the N-Gage, of Symbian OS, of Java Games and the mobile market? Ewan asked all that, and more. 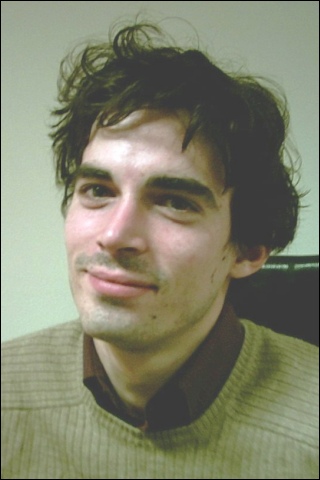 All About A Lofty Games Company

Gameloft was founded in 1999 by Michel Guillemot, co-founder of Ubisoft. Michel has been in the video games business for around 20 years and on seeing the new wave of mobile phones, he decided to create a new company to focus on these new formats. They are now recognised for state-of-the-art titles, and as one of the market leaders in mobile gaming. Charles Revillion had been working in the video games industry long before joining Gameloft as their Marketing and PR Manager in the UK.

All About Symbian caught up with Charles to find out how all this affects Symbian powered phones, how Gameloft see the mobile market develop, what they think of the N-Gage, Symbian OS and how the whole mobile space looks today...

There's a huge number of mobile phones out there, so I started out asking Charles where Gameloft's main focus was. "Let’s say our focus is clearly on downloadable games, those are MIDP, Brew, Symbian and i-mode games - downloadable meaning today the game shall weight less than 180k on average. We’re also technologically agnostic, and pragmatic towards the market. There are around 250 million MIDP enabled handsets in the world today, with over 1 billion expected in 2007. That’s why we mainly develop in MIDP."

"Regarding Symbian, we strongly support the platform, which is more powerful compared to its MIDP equivalent so when we have the choice, we’d be glad to axis all our Series 60 games on Symbian instead of MIDP. However, Symbian is still supported by few operators. That’s the main issue for Symbian development according to us, since operators are the main distribution channels."

A quick look back through the history of Symbian reveals one of the first Gameloft games for Symbian OS was Rayman for the Nokia 9210. Are we going to see more C++ based applications across the Symbian platform? "As I said, we’re technologically agnostic and we are keen to develop in any language provided it’s an open standard. We mainly develop on MIDP given the installed base; and when the choice between MIDP and Symbian is offered, the distribution issue with Symbian leads us to prefer MIDP even if we would probably rather code in C++/ Symbian. A similar game like Prince of Persia Sands of Time that we developed both in Symbian and in MIDP for Series 60, both weighing around 150k, definitely looks better in Symbian than Java. However the global sales are far less important."

"Regarding UIQ and Series 80/90, we keep a close eye on these handsets; the installed base is currently a little short but as soon as the sales potential increase, we will, for sure, launch games."

Sales are the key then (as with any company). With Gameloft being one of the main providers of games for the Nokia N-Gage, I had to ask about sales of titles such as Rayman 3 and Splinter Cell: Team Stealth Action. "Obviously it is really difficult to give any figures and you should ask Nokia directly but we are working very closely with Nokia on the N-Gage and we are still actively developing for the N-Gage platform. The best example is Asphalt: Urban GT, our new release which Nokia announced last week."

Given that Gameloft are involved in the next batch (the third wave) of new games for the N-Gage, then we can only assume that the figures are healthy. Perhaps the N-Gage QD has had an effect on the market? I put that point to Charles. Do Gameloft see it as a significant improvement on the original? "We believe the QD is a nice phone that has good sales potential now that the first N-Gage problems are solved and the phone is smaller."

Nokia's N-Gage versus other Platforms

How does coding on Symbian OS compare to programming for the home consoles, the PC and devices like the GBA? "Let’s develop two main ideas : the technical one and the managerial one."

"In 2D, and for GBA, some options are managed directly by the console hardware, like zooms and sprite rotation, whereas Symbian will require coding a dedicated program for these options; it’s certainly a plus for the GBA."

"3D on the other hand is almost not feasible on GBA. The N-Gage handset does not contain any dedicated 3D chip (no chip, no graphic card), but the CPU is so powerful that we can add software (dedicated 3D engine) that will allow real, full 3D. The execution time set will not be as efficient as if we had a 3D chip, since it’s software and not hardware, but nonetheless the result is pretty satisfying (see Tom Clancy’s Ghost Recon Jungle Storm, our first N-Gage 3D Game out now)." Personally I have to agree, having played Ghost Recon now for some time, that it's smooth and has a high frame rate.

Regarding the development, the N-Gage titles Rayman 3 and Splinter Cell have been developed after their sister GBA versions (developed by Ubisoft). The N-Gage versions have been inspired by the GBA ones in terms of gameplay and graphics. However the code had to be entirely recreated, along with the multiplayer options. It took us consequently a little less time than for a full development let’s say around 6 months. However if we had to develop the two games "from scratch" in parallel, the development times would have been probably similar, with specific issues for each console, and would have lasted around 9 months.

Now, when you oppose developing for Next Gen consoles and mobile or GBA, maybe one of the main differences is the time scale and the size of the team, more than the code. A next gen console will require a 50-person team for 3 years, whereas in mobile development we have 5-person teams for cellphones working for 4 to 6 months, up to 10-person teams for the N-Gage during 6 to 9 months. That will mean in mobile development, the same programmer will be able to handle the whole project (engine, AI, code, etc.) whereas tasks are completely divided for bigger projects. It also means that after 6 months your project is finished and you can start another project. 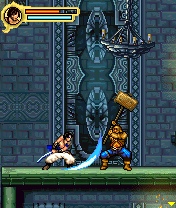 "As I said, we’re technologically agnostic and we are keen to develop in any language provided it’s an open standard. We prefer to use MIDP 2.0 when we have choice. The library is more complete and we have more options, especially to add small animations and sound. The installed based of MIDP 1.0 is still more often used today though."

Nokia's recent release of a demo version of Pathway to Glory has raised an interesting new marketing tool to the gaming world. Would Gameloft consider linking up MIDP games on the N-Gage MMC? For example, If I'm playing Splinter Cell on the N-Gage, would it not be an idea to have MIDP or C++ demo versions as well so I can beam them to friends over Bluetooth and virally promote your software?

"We don’t believe you need a demo for a 3 euros product. Buying a 3 euros product is more a "compulsive buy" than a long-prepared one. And when do you stop the demo? After 1 minute or after 1 level ? But will people have time enough to appreciate the full potential of the games? As for offering free games or creating free demos, we’re not very keen on the idea so far."

"As an example, one of our competitors started selling games in "parts". You’d buy the first level for let’s say 1 euro, and at the end you’re offered to buy the second one and so on. This model was not popular at all and they have stopped it. Free demos and incomplete games may risk killing the market instead of promoting it."

Making Money and Getting Games To Players

Every Company PR Man likes to talk about their success stories, and Charles is no exception. What's been the best game for Gameloft so far?

"Our most popular game so far is Tom Clancy’s Splinter Cell, which has sold more than 1million copies since its launch in 2002. It’s been sold completely worldwide, from America to Asia and Europe, in all our 65 distributed countries. But as another example, one of our other best-selling games is "Solitaire", the card came, which obviously does not address the same target as Splinter Cell.

"Apart from very specific countries like Korea and Japan, we don’t currently see too much of a difference between countries. However we often obtain completely different sales rankings within one particular country, depending to the promotion and marketing that each distribution channel offers."

Symbian OS has a strong online presence, but the volume of phones doesn't always reflect in the number of people downloading games. How do you get your products onto customer phones? How do you get them into the retail channels? Operators? Online stores? What's the most useful route for Gameloft? 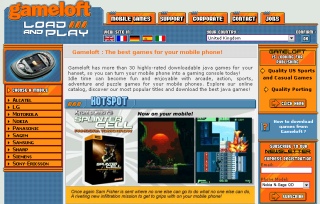 "We distribute our games through 5 main distribution channels:

"Telecom operators constitute the largest channel today. Gameloft leads the competition in this area since we have agreements with 110 operators covering 65 countries. We share each game revenue with the operator, and they keep a marketing margin that they invest in all kind of marketing actions to promote the games. Operators obviously have an amazing marketing force to sustain the sales."

"We also sell the games through affiliated media (magazines, TV, websites) and logo & ringtones groups. They also bring their marketing forces and are able to give visibility to the products."

Where do you see mobile gaming going in the future? What trends can you see and what ones would you like to develop?

"The global trend we foresee is that mobile gaming is an increasing market that will touch more and more people, from hardcore gamers to casual ones. Since everybody today has a handset in his pocket, hardware installed (based) acts less as a brake than in the traditional PC & console market and consequently the potential target is larger. "

"We also believe there will always be very simple casual 2D games for everybody, and in parallel more technically-sophisticated games start to appear. We are launching our first 3D games at the end of 2004 for example. We consequently need to be both a casual- and a technological-oriented production force at the same time."

Charles, thanks for your time.