A Personal Review: 7 Days With An Nokia N95

Ewan picked up an N95 last week, and hasn't stopped fiddling with it since. This is his story so far... 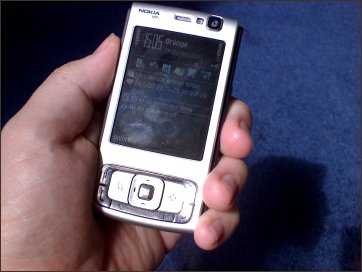 Right, this isn’t a bells and whistles, everything in-depth, microscopic look at the Nokia N95, the new ‘hero’ device from Finland. After all, we’ve already done that here on All About Symbian previously (start here ). Having purchased an N95 last week, I wanted to look back at the first week and talk about how I’ve been using it. Not the “go through and test everything for review” style, but a more practical experience. So if I’ve not mentioned your favourite feature here, chances are I’ve not tried it yet.

First of all, I like the physical design of the N95. I’ve made no bones in the past of my love of the original design of the Nokia 7650, especially the way that when it was closed up, the 7650 was acting like a read only device. To do any work, editing, sending texts, you opened up the number pad (and got a read/write smartphone). This dual mode gave a physical guide to what you were doing with the 7650, and it is pretty much duplicated here with the N95. So the initial feeling was that this is the 7650 on steroids.

That feeling continues when you look at the screen size (240x320 QVGA), the memory (160MB internal, plus up to 2GB on MicroSD), the camera (5 megapixels for stills, and up to DVD resolution for video) and the audio player. Probably the only upsetting thing here is that I need to buy yet another format of memory card for my phone. This is balanced out by the use of a standard mini-USB port on the N95 for connectivity which is great for me as the other devices I regularly travel with (PSP, Minidisc, and a ropey MP3 recorder/player) all use mini-USB, so I now have one connection cable to rule them all.

Connectivity is provided by Nokia’s PC Suite, and you also have the choice of accessing the memory card as if it was a USB storage device – great if you need to move files to a computer that doesn’t have the Nokia software installed,. It’s not something I’d use at home (the PC Suite happily lets Windows Explorer navigate to the N95)thanks to the PC Suite having the N95 as another drive in Windows Explorer in its own right. But for Mac or Linux users this will prove useful.

Handing the N95 around people at a recent meeting of programmers and developers (Yahoo’s HackDay), the feature that everyone picked out as being mind-boggling was the camera. Or more precisely the 5 megapixels that the camera has. More than once a number of slim digital cameras were waved around, with the phrase “that phone has more than my camera!” Of course, just having more megapixels does not mean the composition of your pictures will be any better. You’ll still need to master the arcane subject of ‘making sure things are lit’ [Ed FX: Steve punches the air - yep, that's the trick!] 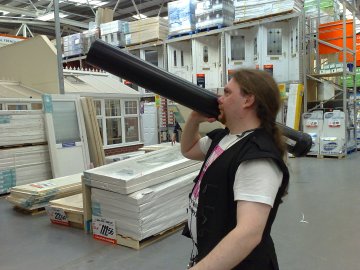 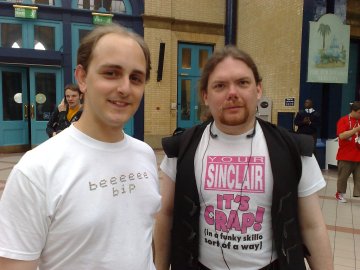 
The other part of having a camera on a modern smartphone is taking video. There’s a bundle of settings, and five different settings for the quality, size and frame rate of the recording, which to me appears a bit hit and miss and is going to need a lot of testing and watching to find the best setting. So I left this on the middle setting (320x240) and it seemed to do a cracking job in recording smooth video that was viewable on the phone and also on my PC.

The final twist to the visual media is the built in editing software (also featured in Steve's recent AAS video podcast). Now I’m pretty sure that a lot of high-end video editing people are going to scoff, but the N95 is a great example of a tool that does ‘just enough.’ At the end of Hackday, each team had to present on their project – and for our presentation I put together a music video using just the N95, mixing together music, pictures and video. Given that the team as a whole did win one of the prizes, partly on the strength of the presentation, then I’d say that’s a success.

The N95 also carries an MP3 player, and the dual mode slider exposes a set of MP3 buttons along the top edge of the screen (play, stop, forward and rewind). Strangely, I’ve not found myself using these a lot, partly because I keep getting freaked out by the screen rotation taking a few seconds and throwing screen elements around for a second or two – using the direction pad was preferable. And of course to make best use you really do need to pick up a decent sized MicroSD card – the 100MB or so of free storage on the N95 after booting will hold a few tunes, and a good ringtone, but not much more than a single album.

There is GPS in the N95 and… it works. It might take a good few minutes to lock on to the satellites, and it’s pretty much useless in the tenements and old stone buildings around Edinburgh. What is nice is the Maps application. This can either pull down map data as required, or have countries pre-loaded. I mean, Scotland and England in 108MB is not to be sniffed at. Okay, you need to upgrade if you want the full voice guided, turn by turn navigation, but for me, just having a searchable map and occasional route planner on my travels is more than enough. It’s a delight to use – I just wish it would set up the GPS faster, even to a coarse level of accuracy.

With the N95 running S60 3rd Edition, there’s a good range of third party applications now available.. but with 58 applications built into the standard Nokia firmware, I’ve only had to install a handful of third party applications (and if you know me well enough, you’ll know that means a screenshot application and Mobipocket Reader). Oh and the phone was flashed as it came out the box to the latest firmware – it’s a subtle thing, but Nokia allowing you to flash your own phone makes for a much better user experience, and the confidence that everything is as stable as possible.

I still think that someone new to the N95 is going to have an almost overwhelming experience. Even though I’m familiar with S60, I spent the first two or three days moving icons around, tweaking the active standby screen, and generally getting everything set up in the way I like my S60 phones. I can’t think what it would be like for someone to just get one of these and have to 'get' what’s going on. This of course is where things like ‘open the camera lens, camera app is active’ messages, the quick access keys and MP3 controls, and the default layout of the icons actually becomes a lot more useful.

All the built in applications are pretty much as on the S60 powered E61i and the (smaller screened) N91, my recent S60 phones, so there have been no surprises in how everything works. I’m still not partial to the Nokia Web browser, but it gets the job done. I wish Calendar and Notes application had smaller fonts and would interface with the categories in Outlook better. But on the whole there are no huge problems with the software.

Being an Nseries device, there are gaming features, so the new version of System Rush and Snakes are in the firmware. Being a huge Snakes fan from the N-Gage I was happy to see the levels are the same. It also shows just how poor the N95 controls are for games when compared to the tightly focused N-Gage – so while some Nseries devices may have the next-gen gaming api’s installed, I’m convinced we’ll see a ‘for gaming’ Nseries device by the end of the year.

Nokia advertise the N95 as “It’s what computers have become” and that’s a pretty good statement. There’s a lot of power in here, and as much as it tries to stay hidden, there’s a lot of complexity as well. It’s clearly the current ‘uber-geek’ swiss army knife styled smartphone, with the aim to do everything for everyone in the smallest practical package. It’s certainly appealed to me, both for the form factor, the capability, and the sheer cuteness of the device.

Would I want to hand the N95 over to someone else? Probably not. And that does sum up how I feel about the N95 after a week or so. It’s a great device, it does most of the things I need a mobile to do (and then some) and I’m looking forward to exploring it further over the next few weeks.