As the resolution and quality of cameras in smartphones has risen dramatically in the last five years, it's easy to forget that these devices aren't just for snapping people and things around us right now. With the technology now included - here demoed on the especially capable Nokia Lumia 1020, but this also applies to any other decent camera phone, of course - it's perfectly practical to archive and transfer printed images from older times. In this feature, I explain a use case that made a lot of sense to me and I pass on a few tips.

We've had computer scanners for decades, of course. You saw something you want to preserve in some way (digitally), you laid it on the scanner bed and then waited a minute while it got scanned into a PC. You then worried about what to do with it in terms of processing, cropping and sharing or archiving. It's a bit of a hassle, if we're honest, which is why most people have never done much scanning.

And it's why I rarely bother these days. Even in the office it's so much easier to use my smartphone camera and simply take a picture of whatever it is. Of course, I tend to equip myself with the very best in smartphone imaging: Nokia 808 PureView and then Lumia 1020, with big sensors, high megapixel counts, and so on - I doubt you'd get very good results with the average phone camera.

Now, if all this is old hat to you then move on, nothing to see - but I thought a real world case study might fire the imagination of some readers here - especially if they have one of the two big PureView cameras covered on the All About sites....

I was at the ancestral home(!) and was shown old photos of my parents, on holiday 34 years ago, when they were younger than I am now. Particularly interesting in that these had been unearthed from a loft and I'd never seen them before. Now, we're not talking massive photo quality from the originals, since they were taken on a '126' film camera, with fixed focus lens, and then printed and stored for the best part of half a century. But they hadn't been exposed to light, at least, so there was still some contrast and detail left. Absolutely fascinating for me.

I found numerous gems that I wanted copies of, but there was no scanner in the house and besides the photos were all glued into a very bulky 1980's paper album, which would have made flat bed scanning tricky, to say the least.

Which is where the smartphone camera comes in, of course. Why on earth couldn't I just take a photo of the err.... photo? After all, 41 megapixels (in my case, in the 1020 or 808) should be more than enough resolution, even after oversampling (to reduce noise) and cropping, as needed. A little care was needed certainly, which is why I've put together some tips below. 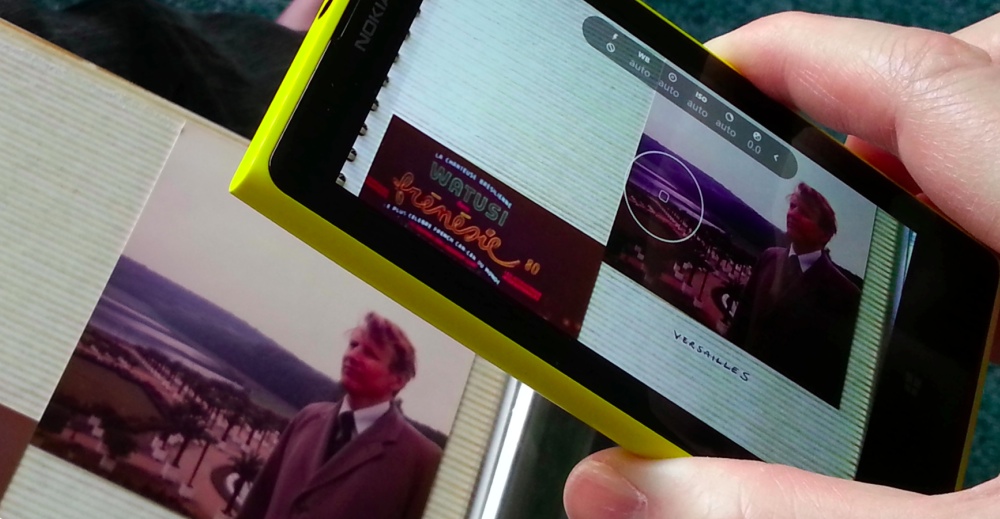 Here then was my process:

You get the idea, anyway. Rather cutely, the photo will end up appearing on the phone (after smart cropping, etc.) as if it had been captured as-is - for higher quality originals, causing a moment's disbelief as your 2014 smartphone appears to have just taken a photo from (in my case) 1980! Of course, the higher the original's quality and the better your smartphone camera, then the better the end result.

But I stand by the technique for getting a 34 year old 'polaroid' converted to a useable 5MP .JPG image in only a few seconds, using the ultimate all-in-one converged device that's in your pocket and always with you. And, of course, from a smartphone base, it's trivial to then directly share the results around friends and family, as needed.

Comments welcome. Have you ever used your smartphone camera for something along these lines? Have you any more tips for getting better results?

Filed: Home > Features > Your smartphone - the perfect pocket scanner and archiver that's always with you