With the arrival of the HTC One for Phones Show review, and with its imaging pretensions ("ultrapixels"!), what better opportunity than to put it up against the best camera-toting smartphones on both Symbian and Windows Phone? In the shape of the Nokia 808 PureView and Lumia 920. Oh yes, and, by popular request, I introduce an imposter from 2007 to the competition, the Nokia N95 classic, the world's first smartphone with a decent camera (and sensor size and megapixel quotient that's still comparable). How will that fare against the class of 2012 and 2013? 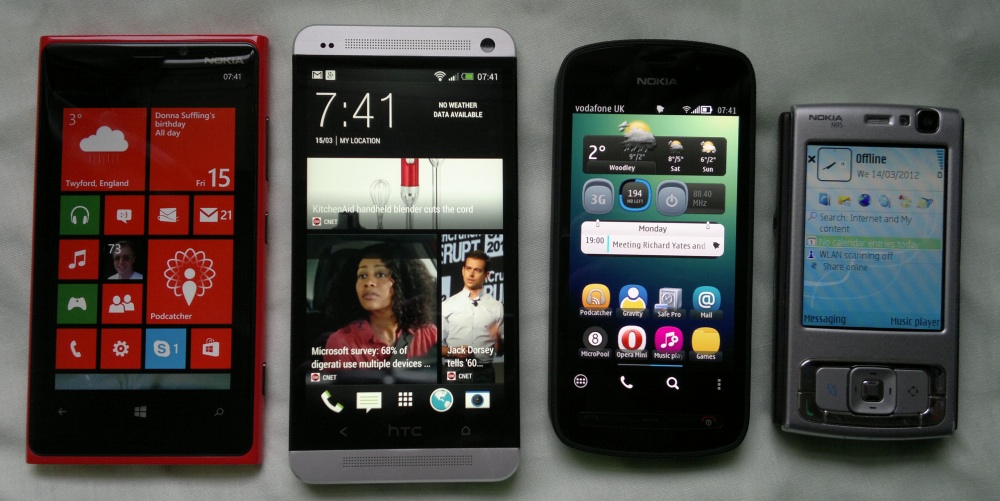 As usual, it goes without saying that testing still camera quality on smartphones is only one small part of their overall mission - assessing these very different devices overall is a job for another column, another show, etc.

However, HTC made a big fuss over the camera in the One when it was launched, even posting this somewhat disingenuous infographic in the run-up to the One announcement. Here's the launch blog post talking up the 'ultrapixel' camera - all of which makes the HTC One a valid candidate for a still photo shootout against previous champions at my hands.

As usual, the methodology is to look at a wide variety of subjects and lighting conditions, taking the same shot with all four camera phones. I then crop in (to 2:2 or 1:1 level, as appropriate), to the point where, for a central detail, it's possible to see significant differences between the results. It's assumed that at this level of excellence, there's no way you'd see a difference for most shots viewed here at web resolution - which is why the cropping in is necessary, since I doubt many people have 4K monitors and compatible web browsers!

Loads of colour and, importantly, loads of detail and texture to examine. 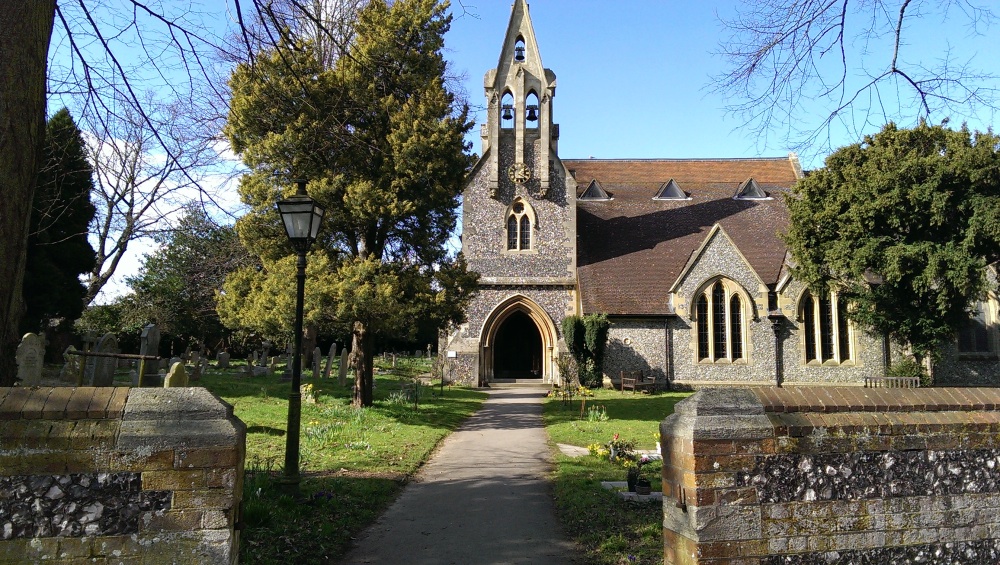 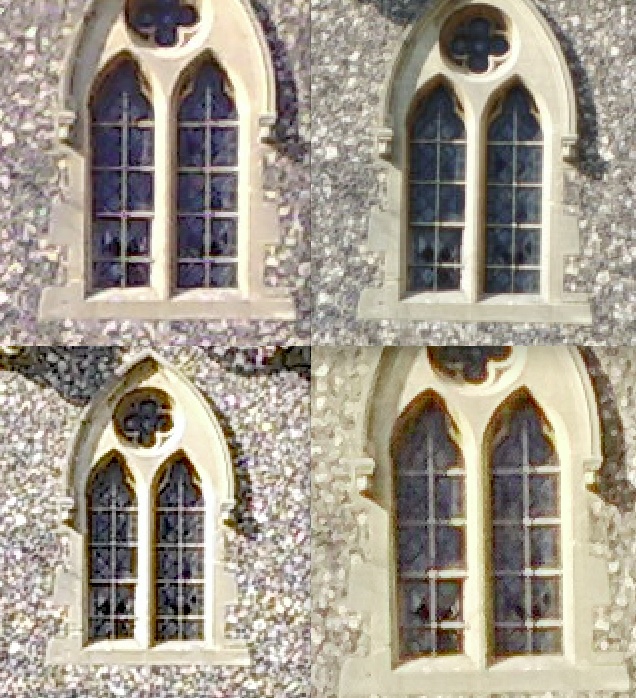 The naturalness of the 808's crop is quite striking, with the six year old N95's crop perhaps coming in second, spoilt by some artefacts and a slight colour cast. Neither the One's shot (too heavily processed) nor the Lumia 920's shot (too many artefacts, almost blurry) really satisfy here.

Again, great light, but because the museum was closed, I had to make do with this shot of the Gannet from about 50 metres. The Nokia 808 was allowed to stretch its legs here, as such a task was perfect for its 'lossless' PureView zoom, but otherwise everything was left on full auto, of course. 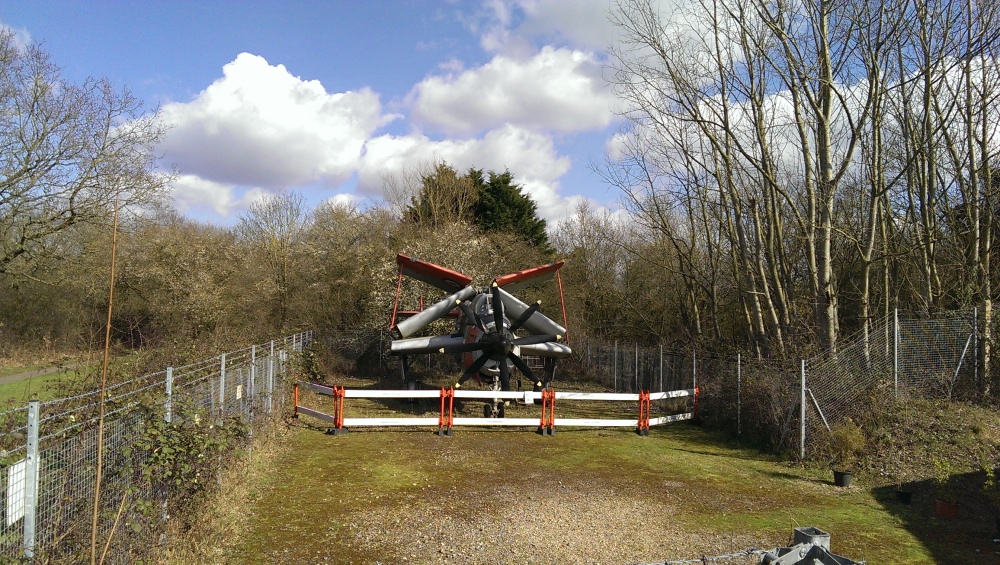 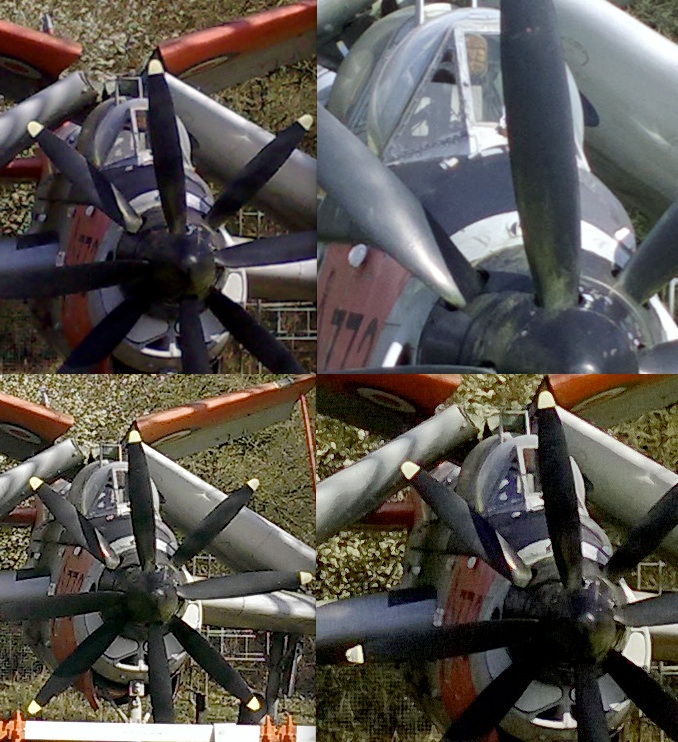 All four phone cameras did quite well here, considering the distance, but again the 808's extra power comes to the fore, with the PureView zoom capturing even the rivets on the windscreen surrounds. There's little to split the N95 and HTC One here, though the Lumia 920's photo is noticeably better, as you might expect from the (here, slightly higher) 7 megapixel resolution, with even the fencing behind the plane being detailed clearly.

Taking macro shots is as important as landscape these days, especially in this world of social photography and sharing. 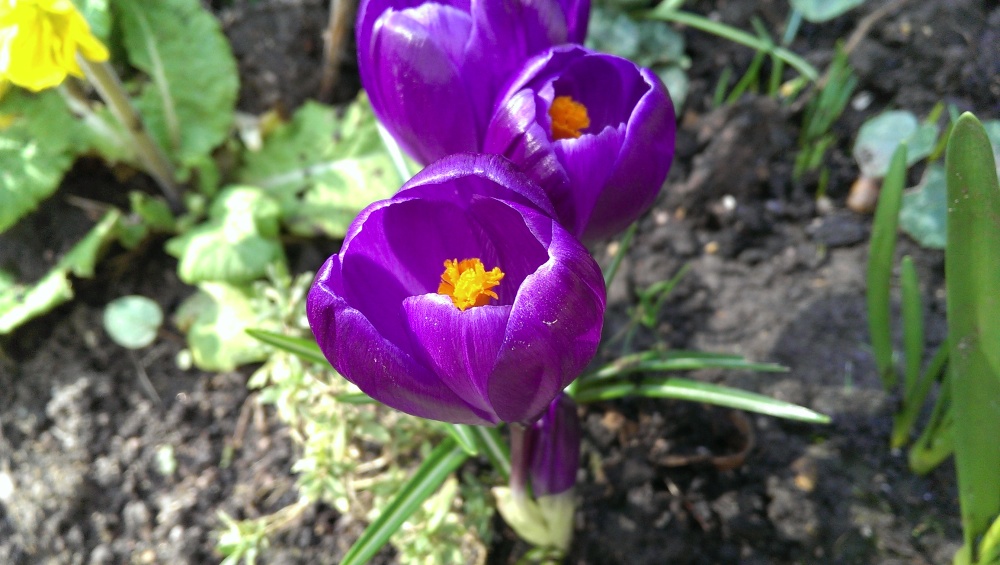 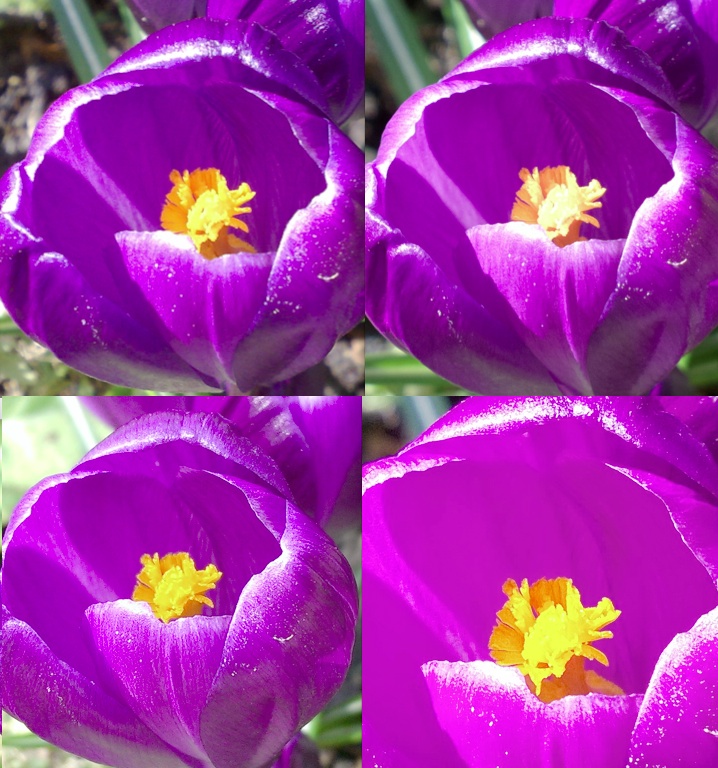 Four pretty good macro shots, though the Lumia 920 loses points for getting the purple wrong - it's virtually pink! There's little to split the N95 and 808's shots (remember that the latter doesn't really like tight macro photos), and it's the HTC One that romps home here, with a virtually perfect rendition of the flower, in terms of detail and colour.

One subject which lots of phone camera mess up is blocks of texture in nature. Brush, trees, but most of all grass. I shot this scene initially because of the interesting tree shapes, but it was the handling of grass which caught my eye in terms of differentiating between the phone cameras. 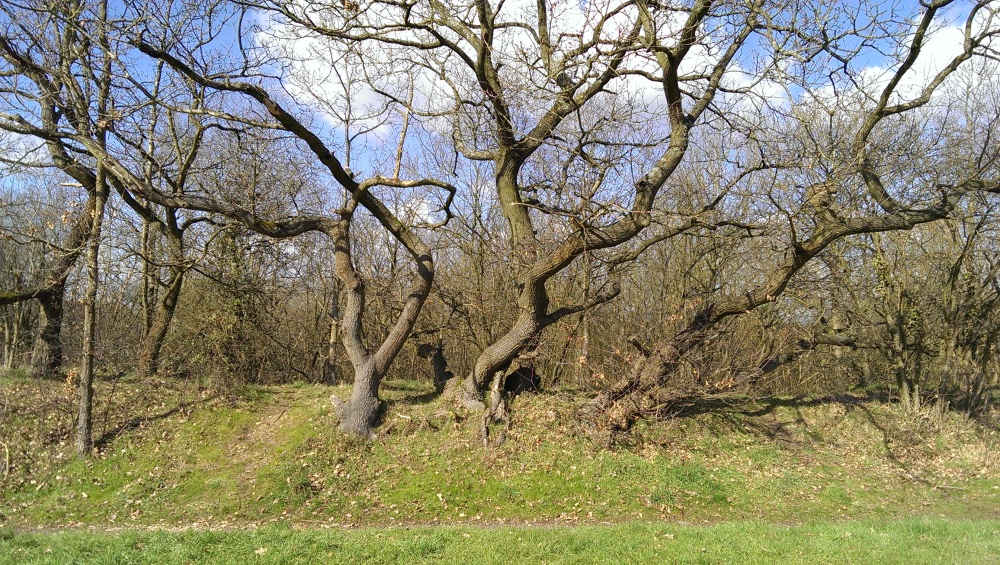 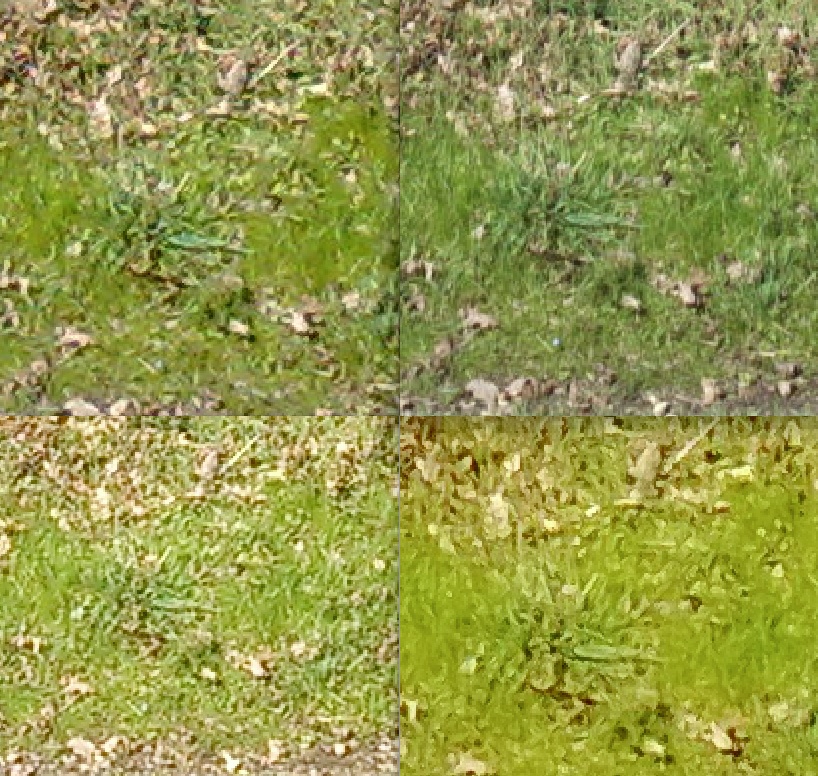 Now this may look like just a lot of green pixellation to you, but remember this is four phone cameras trying to represent the incredible detail (blades of grass, etc) and yet relative lack of colour variation in a patch of grass - this is something that regularly trips up image processing and so is a very valid test case.

The crops from the HTC One and the Lumia 920 are nothing more than modern art - the 920 smoothes away so much detail with its noise reduction that there's no texture left, while the One tries to keep the detail with over-zealous edge enhancement - and fails, in a mass of artefacts. The N95 shot just about manages to convince that this is a crop of grass (and leaves), but there's still a lot of 'mushiness' at this crop level, while the 808's crop not only looks like actual grass, but you can pick out quite a few individual blades.

Two notes from this scene - this being the HTC One's version, it's all rather.... blue/purple. A definite colouration issue for this shot. Also, the HTC One has the same interesting feature as the Lumia 920 in that its optimisation for low light means that even quite dark scenes appear a lot lighter than they were in reality. The bright sky below was actually a dark-ish sky after sunset! Trust me - it was a true 'low light' scene! 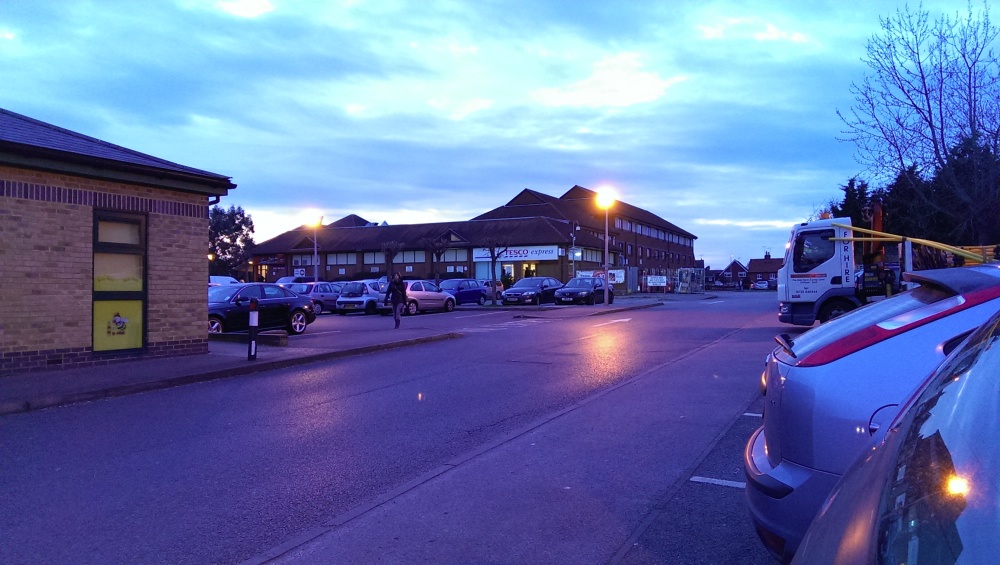 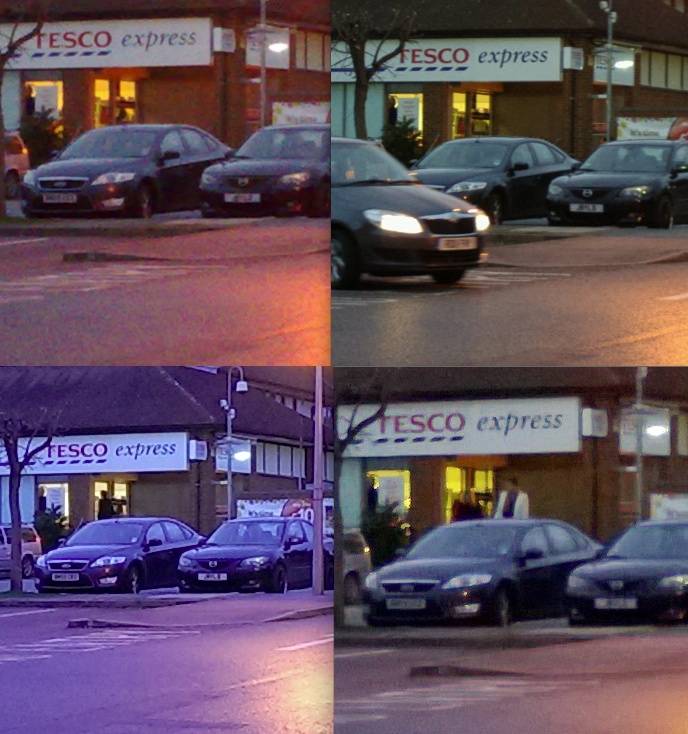 Despite the OIS and low light 'optimisation' of the Lumia 920 and HTC One, neither can get close to the Nokia 808 PureView again, even though I was shooting handheld. Maybe this is a tribute to my steady hand or maybe the 808 really is that good. With a 1/1.2" sensor to receive light, a scene has to be almost pitch black before the other two phones would get a serious look in.

Looking at the crops here, the HTC One is perhaps in second place, though it loses points for the strange purple cast - and everything does seem rather artificially sharpened. The N95's crop isn't too bad, but again there's a slight colour cast and plenty of noise as well. Finally, the Lumia 920's shot is just disappointing, with characteristic dodgy focussing and sparring sharpening and noise reduction algorithms - I still believe there's quite a bit Nokia can do in software to improve the results from the 920's camera.

A typical domestic set-up, with light from a small cooker hood, again shot handheld. And again the actual light levels produced are less than the shots here would suggest. 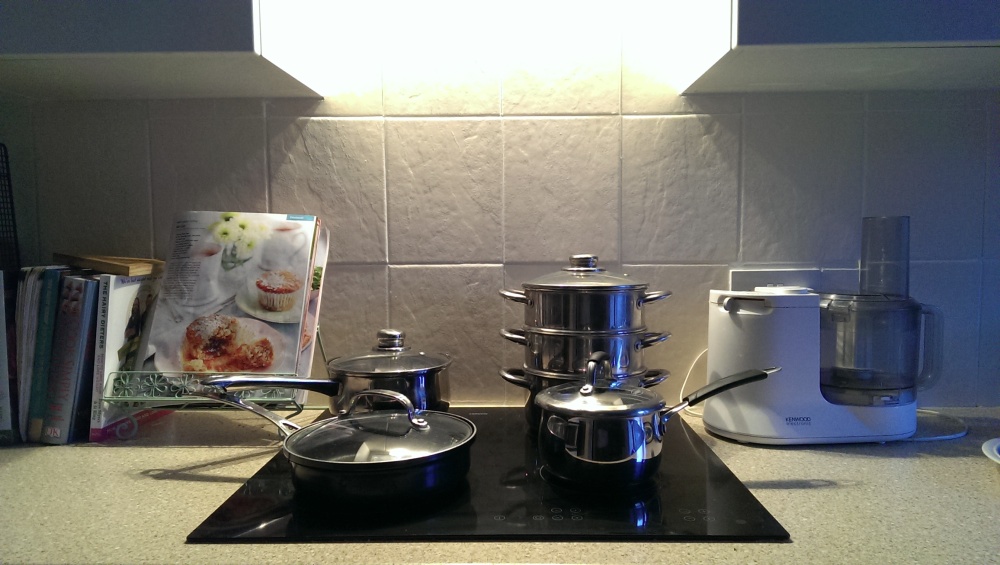 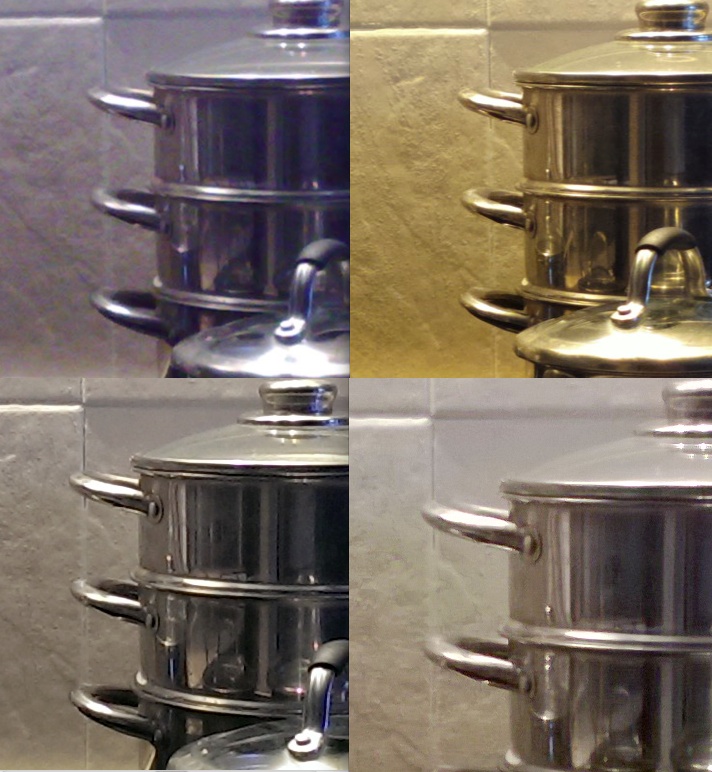 Apologies for sounding like a broken record, but the Nokia 808 photo sails away with the honours here. Not only is the saucepan detail the most natural, but it gets the colour of the tiles (a pale yellow, lit by an incandescent bulb) just right, whereas the other three photos show the tiles as white, perhaps with the image processing software not being able to auto-adjust the white balance.

The HTC One's shot is admirably crisp, even if this is partly due to the over-sharpening, while the N95 and Lumia 920's images are each very slightly blurred - again the 920 is a mystery to me, it sometimes bungles photos that should be a walk in the park for its technology.

It was tempting to throw in a human interest, night time shot, for flash test, but as that would have been a guaranteed big win for the 808 as well on account of the Xenon flash, I think it's best to stop for now.

Add up the points across all the tests and you get: 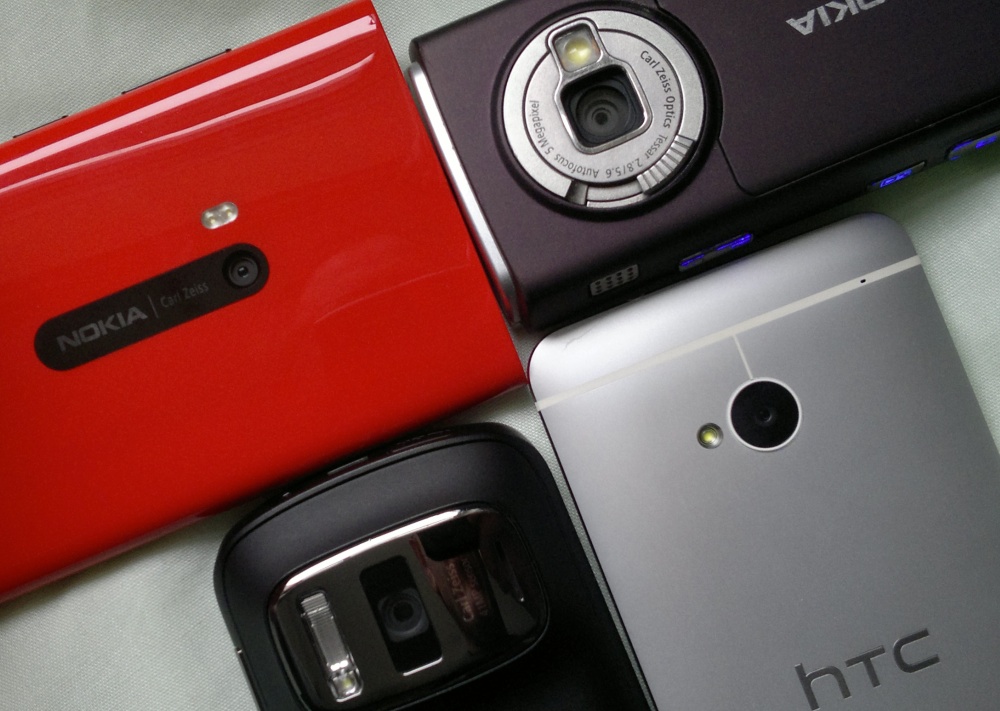 The margin of victory here (and this was without even doing the flash test) for the Nokia 808 is nothing short of extraordinary. You can see why people are getting excited about Nokia possibly bringing the PureView (phase 1) technology (and Xenon flash) to Windows Phone this year. The gap between the 808 and every other camera phone in existence is simply huge (with the possible exception of the 808's predecessor, the 2010 N8, which runs it much closer).

Things are very close for second place here between the One and the N95. At first glance you might suspect that six years of tech advancement would help the HTC One blow the N95 away, but then I'd remind you of the latter's bigger sensor (1/2.5" optical format) and its Carl Zeiss optics. The One's newer, BSI sensor and image processing chip all help level the playing field though, and even edge ahead. The so-called 'ultrapixels' are hardly groundbreaking though - the N95's sensor pixels are of similar size. Only they were just called 'pixels' back in the day, you know...

You may remember Steve Jobs saying at the iPhone's launch in 2007 that it was five years ahead of the competition? From my perspective, I could indeed see innovations like the all-touch, simple UI and capacitive touch, but the N95 from the same year was also years ahead of the rest of the pack, in terms of convergence and - here - camera performance. It's an appalling thought that a 2013 camera-centric Android flagship only just manages to top its results. Admittedly though, the HTC One does also bring a truck load of extra intelligence to the whole concept of 'doing more' with photos (and video).

Still, the result is a vote of cautious confidence in the HTC One, which performs well, camera-wise, for an Android handset. In contrast, the Nokia Lumia 920 disappoints slightly - I'd expected it to be neck and neck with the One. I quite literally cannot put my finger on it, but there's something not quite right about the 920's camera and results. Whether it's the whole-cam OIS/jitter causing problems, whether it's dodgy focussing algorithms or something else in the processing chain, the end results are not quite what we'd all hoped for.

Is there an overall conclusion I can draw then (beyond the 808's dominance) for absolute photo quality? Yes, it's that physics is king. You can have all the fancy image enhancement algorithms you want, and apply fancier image stabilisation systems... and the camera unit with the bigger physical sensor and bigger physical optics will win out most of the time.

What I really can't understand is why no Android or Windows Phone manufacturer has tried putting in a camera of, say, the N8's size (12MP, 1/1.8" sensor) - that would get close to the 808 in many areas and yet the N8's camera 'hump' is only a couple of millimetres, something which would surely be stomached by users if they knew their photos would be stellar.

PS. Of course, there's a lot more to both the HTC One and Lumia 920 than raw photo quality - I'll be reviewing the HTC One in its entirety in Phones Show 196 very shortly.