Getting Symbian updates out without fuss: 'Software Update' matures

With a flurry of updates for the Symbian Belle FP2 platform recently and even some for the Symbian Belle Refresh generation, Nokia's (ok, mainly Accenture's) remaining Symbian programmers are on something of a roll. Who'd have thought that we'd still be getting new features a full year after the last Symbian phone's announcement? And implemented in exactly the most accessible way too. By the way, yes, I'm going back to putting the Symbian name in front of "Belle' again, now that there's no Nokia marketing team who might get offended(!)

Over the course of several generations of S60 3rd Edition smartphones and then S60 5th Edition, we'd become very used to checking 'Software Update' (or 'SW_Update' on older phones). There wasn't always anything too low level or earth shattering though - Python, Gig Finder, Nokia Music (shop) and others made common appearances, with occasional star turns by Nokia Maps. When a software update for the firmware became available, it was sometimes mentioned in SW_Update despatches, but you were usually referred to Nokia Suite or bounced over to Device Manager for the full Over The Air update experience. Mostly, though, Software Update was for odds and ends - often interesting, but rarely anything at too low a level in the OS.

However, we've seen a subtle expansion of Software Update's role in the last couple of years. The first clue is the 'Restart needed' after many of the updates offered. This may sound like a right pain but in fact it's a clue that something fairly critical in the Symbian operating system and core apps is getting patched. Which is a good thing, as it means that real work is being done. We're not talking Gig Finder anymore, we're talking Camera, Gallery, Phone, and more. 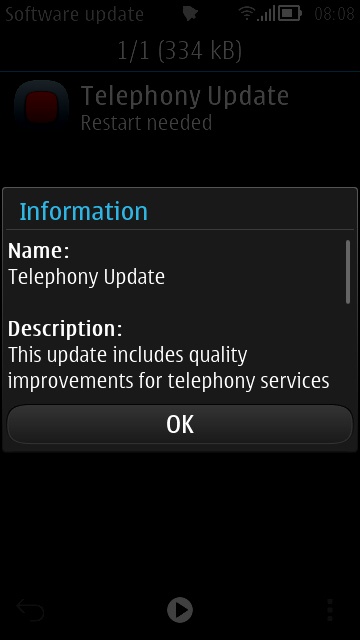 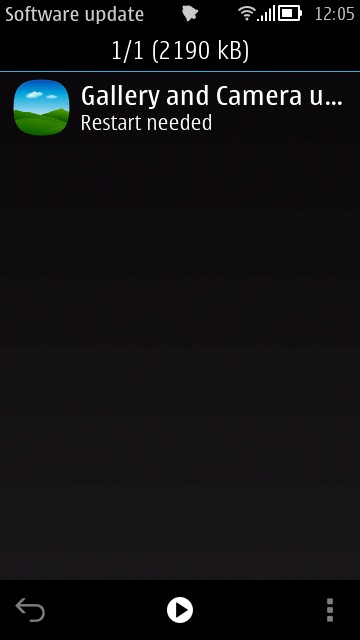 Now, Nokia has tried to control the state of our devices for years, keeping a strict note of which firmware each device was 'on' for every product code and variant. That way, if a user had a problem, they could read off their device details and the support representative would be able to infer the versions of all the key parts of the OS and apps. It was a valid system but obviously very labour intensive and confusing at Nokia's end.

Now, this somewhat arcane set of codes and variants is very much still in place, but pushing out updates as part of firmware works out time consuming and expensive, while each firmware has to be separately approved by regional Nokia teams and local cellular networks. Plus, in these connected days, it could be frustrating at the users' end, because word would get out about an update and then geeks across the world would start shouting because their devices 'hadn't received it yet'.

Which is at least partly why Nokia (and Accenture) have been getting more and more ambitious in recent months. Crippled in terms of resources by Nokia withdrawing almost all manpower and budget from the Symbian side of things, the remaining team have had to think creatively and push ever more through the still-working and (it seems) surprisingly adaptable Software Update system.

Which is great for Nokia, as I'm sure Software Update involves far lower overheads at their end than full blown firmware updates. Obviously, there's still quite a bit of testing needed, but I'll bet it's an order of magnitude lower. Also helping are that an update can be rolled out for more than one device at a time and that the overall pool of devices needing to be tested is smaller than it used to be (e.g. something for just the 808 and 701).

And it's great for users, obviously, in that we get the updates quicker. And (joy of joys) they're clearly marked, so we know more or less exactly what's changed, whereas with firmware updates there was often something of a guessing game about what was actually different(!)

I probably shouldn't highlight this, but what the heck - if you're really enterprising, it's also possible to intercept a Software Update patch mid-install, which is why we usually have (linked in the comments for each story) the raw SIS installation files for each of the above updates. Now, it's possible that Nokia didn't want these updates installed by people in certain regions or with certain firmware versions, but, for the brave at heart, at least there's now a way to both archive these updates and also try them on devices which seem to have been 'forgotten' by the Software Update servers....

Are there limits? Yes, probably, but a surprising amount of the files and modules in Symbian OS can be easily patched by putting replacements in the right place in the system disk. Symbian has always been modular to a heavy degree and the success of Software Update is another reflection of this. Simply install the file, restart the phone and the new file gets picked up at boot time instead of the old one (just as on a desktop hard-disk-based OS). Easy.