A mark of a true geek's smartphone platform is the ability to get down into the device's file system. This is what sets Symbian and Android apart from iOS and Windows Phone. While Android lets you access the file system, it doesn't ship with a file manager; which is where Symbian takes the geek crown by even shipping with a file manager that lets you explore and access almost everything on your device. As such, here's our round up applications that you get to your files and transfer them to your heart's content.

All About Symbian score 80% | X-Plore is free in the Nokia Store | Developer's Store.

We reviewed X-Plore way back for UIQ devices in which it scored a respectable 80%, but an up-to-date view was taken by Steve when he compared it against competing title, T-Fileman.

Nice touches include a view into your Messaging received files' folder - this is easy to get to on Symbian^3 but this is a great function for earlier devices, a ZIP archive creator and a 'Send by Bluetooth' function - this will work for any file, regardless of location or type and thus avoids the nanny state mentality of the built-in File manager.

Aside from the general interface quirkiness, there are elements of the old S60 touch'n'select ('double tap') interface in places, and I found it disconcertingly easy when kinetically scrolling the folder tree around to accidentally select a number of files. But such idiosyncrasies are easy to forgive, especially in so geeky an application.

Final nods to the maturity of X-plore, pointers that everything that can possibly be squeezed into a file manager has been implemented, come with the various preview modes. Tap on an image and you'll be shown an inline thumbnail, overlaid on the folder/file tree. Tap on a sound file and you'll be offered a 'play' button. And so on. 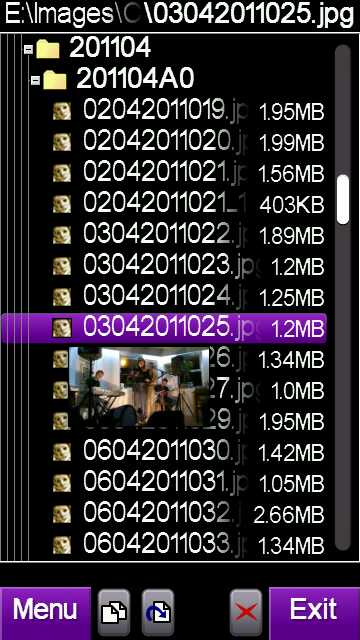 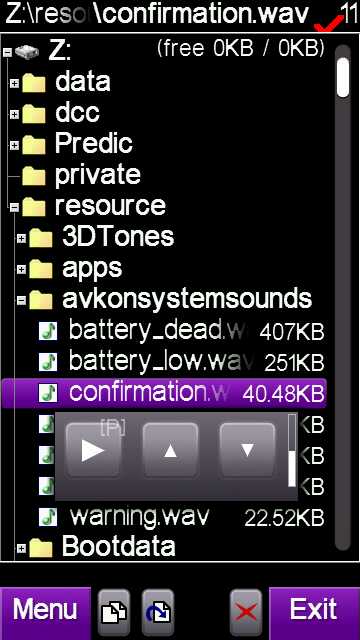 Surprisingly, Symbian doesn't have many File Transfer Protocol (FTP) clients, and the only up-to-date one is Toad FTP. As you'll see in the quotes below, it isn't perfect, but it's in our line-up by default of being the only option.

Toad FTP has a very stripped down user interface. It’s presented in a glassy black theme, which makes it battery friendly to our AMOLED equipped Symbian devices. It all looks rather sleek.

File management options are limited in Toad FTP. Single tapping a file will initiate its transfer. That is, tapping in local view triggers an upload to the server, and vice versa. Long pressing a file on the remote view will bring up a four icon menu across the bottom of the screen. This gives you the options of renaming, deleting, downloading, or creating a new directory. Strangely though, these options are not available in the local view, which leaves you needing to switch to File Manager for handling local files.

As you might have guessed from the above description, there’s no way to select multiple files in Toad FTP. This really limits the scenarios in which the application could be used. If you only want to download or upload a small number of files, this may not be a problem. However, if you wanted to back up an entire directory of photos to an FTP server, you are going to have a lot of repetitive tapping ahead of you! 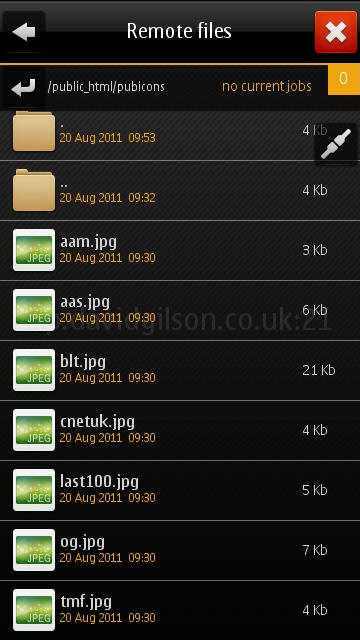 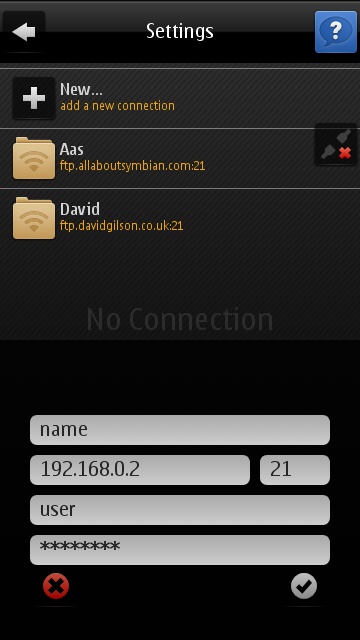 All About Symbian score 90% | SymFTP is available in the Nokia Store for £3.00 and a free trial.

For the most hardcore geeks, an FTP client might not be enough. Some of you might want to serve files to other devices - which sounds crazy, but setting up an FTP server with SymFTP is actually quicker and easier than pairing devices over Bluetooth and transferring files.

To use SymFTP, you have to be connected to a WiFi network, you can’t set yourself up as a server on the Internet, via your mobile network. Once the server is activated, it displays your phone’s IP address, so you know what to type into the clients you’ll be using. If typing an IP address into your PC’s file explorer sounds at all intimidating to you, don’t worry. SymFTP has a clearly written help page, for Windows users at least.

Taking the idea of mobile to mobile transfers a step further, it is possible to use SymFTP in conjunction with JoikuSpot, the WiFi tethering application for Symbian. In this case, the user could set up a WiFi hotspot; running SymFTP will create an FTP server on the same IP address as the WiFi network gateway. Any other users in range could browse and share files on the phone’s server. A great way to share information in the field without needing to fiddle around with Bluetooth pairing. Having checked with SymFTP’s author, this method works without a hitch. 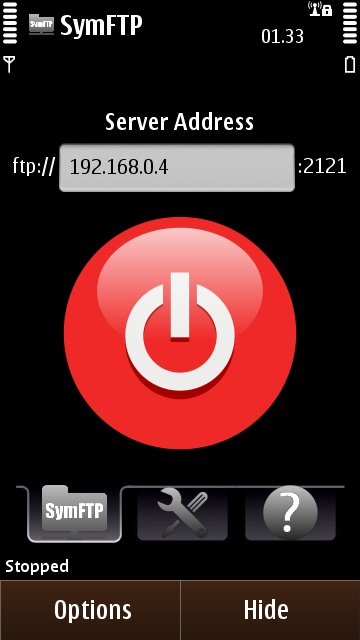 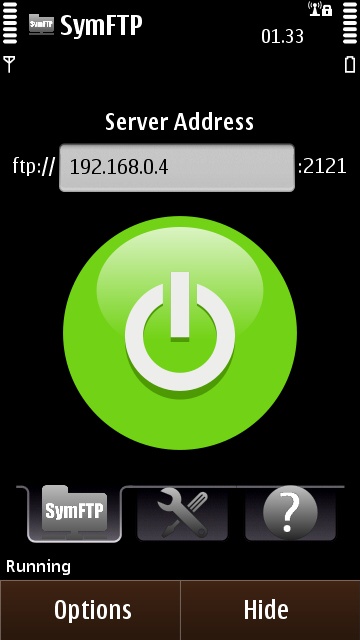 All About Symbian score 82% | cuteBox is available in the Nokai Store for free.

Dropbox is a great way to store and share your files online, and becomes even more powerful when you are able to access your desktop files while out and about with your smartphone. We've tested several Dropbox clients, but cuteBox has by far been our favourite. It has even formed part of my All About Symbian work flow for sending review screenshots directly to the desktop folder on my laptop. Rafe reviewed it for us and had this to say ...

Dropbox is a cloud storage service (web based file hosting) service, with an emphasis on synchronisation, file version control and sharing. Dropbox allows you to store files on the web, in a secure and private environment. The idea is to have your files accessible anywhere at anytime; using it as an alternative to carrying physical media (e.g. a USB stick) is often cited as a key use case. Dropbox also offers the ability to easily share files with other people, regardless of whether they use the Dropbox service or not. More information on the service is available on the Dropbox website.

cuteBox's general performance is excellent. Over a WiFi or 3G connection, there's very little waiting time as you navigate through the file structure and the application makes sensible use of caching where appropriate.

The style of, and thinking behind, cuteBox is very much in line with Dropbox's own simplicity-led design approach. cuteBox has been developed using Qt and, partly as a result, the UI is something of a departure from the standard Symbian look and feel. But, in this instance, it is not a major concern, as the application has been beautifully designed and is easy to use. 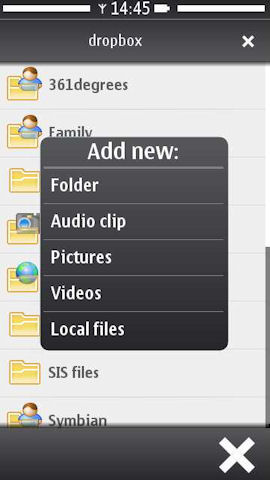 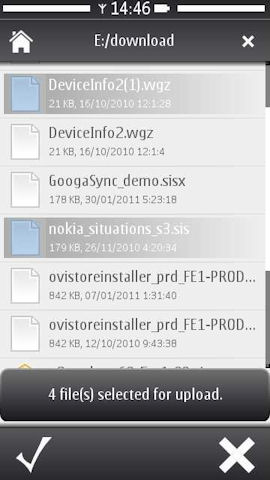 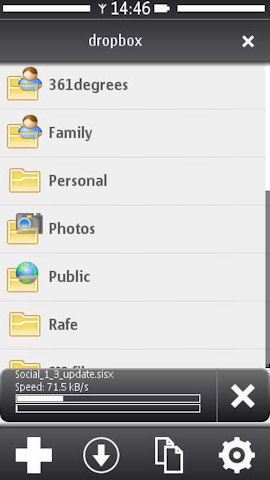 All About Symbian score 70% | SugarSync is available for free in the Nokia Store.

Competition is a good thing and Dropbox has it in the form of SugarSync which provides an online back up service with a slightly different focus than Dropbox, as explained below from our recent review.

SugarSync is an established cloud backup service, and is a solid competitor to Dropbox. Actually, the two work slightly differently and so SugarSync may suit some usage patterns better than others. Also, SugarSync offers 5GB for free versus Dropbox’s 2GB. Whereas Dropbox puts one folder on your computer which will synchronise with the Dropbox servers, SugarSync asks you to register each of your computers and select which of their folders will be synchronised with your account on their servers; i.e. in the cloud. Therefore, SugarSync is better aimed at backing up specific locations on your computer than Dropbox, but this also makes it slightly more complicated to synchronise files between different computers than with Dropbox.

Overall, the SugarSync client for Symbian is well made – it looks good and it works exactly as it’s meant to. Any aspects of the client that you’ll regard as problems, like I did, are limitations of the platform. SugarSync is carefully differentiated from Dropbox, and you’ll probably need to try both to work out which is the best for you. For some people, SugarSync’s Symbian support will be enough to win them over. 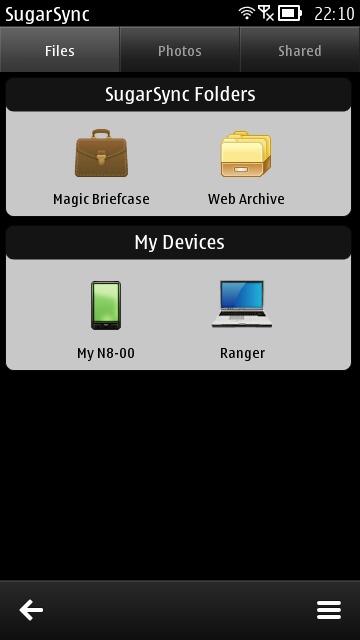 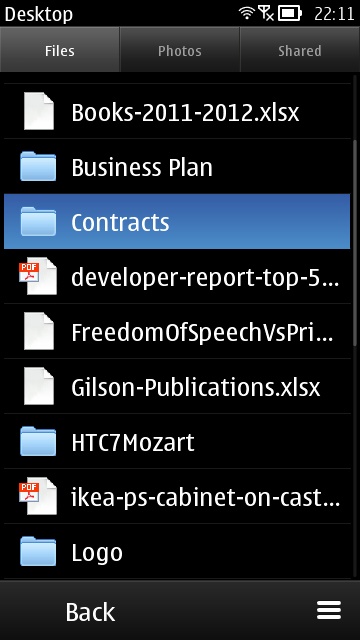