The Nokia N8 has ruled the roost for almost nine months of course - and I don't think anyone reading this is going to expect it to be toppled even by the best of the rest, tested here. But what I was interested in was how much other devices and systems have closed the gap, as at June 2011. Surely the current batch of 8 megapixel-toting smartphones have good enough cameras for most users these days? I wanted to gather some data points, looking right down at pixel level, at four photos in four different scenarios/light levels, for each device.

Again, there's no doubt that the Nokia N8 will produce better photos than any other smartphone, day in, day out, for most people - it really is that good - and with the Xenon flash and huge sensor it doesn't stop impressing just because the sun is going down. But I'm interested in quantifying the differences here, between the Nokia N8 and the 8 megapixel competitors:

Arguably missing from the lineup above is the Apple iPhone 4, which has one of the better 5 megapixel camera units around, but a) I haven't got one to test and b) the lower resolution would ultimately be shown up fairly horribly with my 1:1 pixel level comparisons below.

In order to test each device's raw photographic capabilities (i.e. testing the combination of optics, sensor and software), I took the same four photos on each phone, under identical conditions: 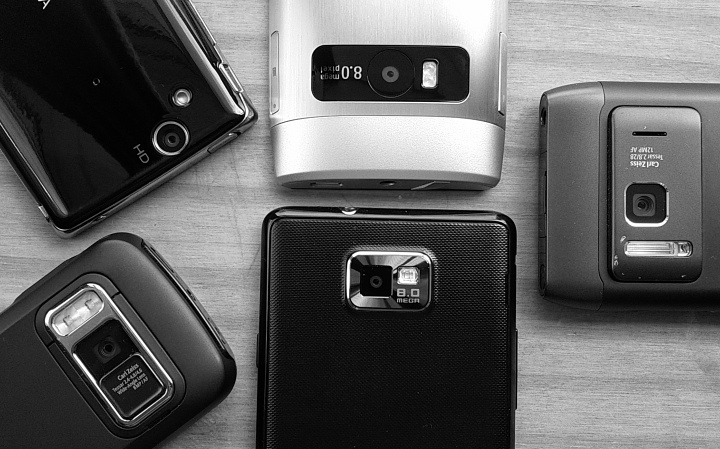 In terms of methodology, I've taken each shot at full resolution and then cropped out the central 1/100th (in terms of area), i.e. the bit I was focussing on at the time. This is an extreme test of each image - no real world cropping in the hands of a user would ever be this extreme. But cameras in phones are now so good that you have to crop this savagely in order to spot real differences!

For the third, indoors shot, note that the subject (me) was so close that I've cropped slightly less, taking roughly the central 1/25th of each frame - taking 1/100th at this range would have resulted in an image fragment that didn't contain enough detail!

In each case, I've marked the crop with a score out of 10 and have done a rough and ready overall total for each camera-smartphone at the end, as a guide.

On with the sample photo crops then...

Again, note that I used a larger crop, in order to show enough interesting detail at this range (1 metre)

Add up the rough and ready scores and we get:

No huge surprises at the top then, the Nokia N8 romps away with the no. 1 spot - other than that the Galaxy S II, with its all round Android superphone status, still manages to get close to the camera-specialist N8 overall - amazing, and a good job by Samsung. I recently nominated the Galaxy S II as the best all round (smart)phone in the world and its camera functionality certainly doesn't let the side down.

The N86, also a camera specialist, isn't that far behind, but the fact that its dedicated camera can be out performed by the Galaxy S II's, with no specific camera pretensions (other than being a flagship device), does show that technology has moved on in the intervening two years.

(Mind you, the N86 also gets a bonus gold star here from me for being the only phone in the bunch that has camera glass protection from dirt and fingerprints and so you don't have to wipe the glass on your t-shirt before every photo. And there's the way you can unlock the phone and launch Camera by simply sliding the camera glass protector open. Somewhat refreshing in these days of unprotected, touchscreen slabs.)

The X7, an example of Nokia's new breed of 8mp EDoF camera phones, almost holds its head up overall, but it should be borne in mind that all its competitors here can also shoot macro subjects. If there had been a test shot of an ornament or flower or meal (the usual close-up subjects!), the X7's camera would have scored very poorly and the Arc overtaken it in a heartbeat.

That the much-vaunted Arc was actually bottom of this set of tests is almost entirely down to its appalling flash (more accurately, a 'video light'?) - I simply don't think the Sony Ericsson cameras in recent smartphones can survive when the sun sets. Sad.

In addition to shooting stills, all of these phones can also shoot video too - and very well, in all cases. The N86's video capture shows its age, at 'only' VGA resolution, but makes up for it with a digital microphone (as on the N8) and intelligent digital zoom. The rest shoot in 720p resolution and generally do a great job, with the Galaxy S II even shooting in full 1080p. A detailed comparison of the quality of video capture is an article for another day though.

I was right though - in terms of photography, other smartphones have closed the gap on Nokia - slightly. But with more devices set to appear with Galaxy S II quality cameras, we're surely nearing the point where Nokia needs to take its next step forwards in this area. A phone with even larger sensor, 14 megapixel resolution, brighter Xenon flash (N82-level?) and LED video light as well, perhaps?

In the meantime, the 2010 N8 still impresses with its all round camera skills - as N8 owners around the world keep on attesting.