Time for a spring clean and makeover? Starring the Nokia E72

The sun is shining (here in the UK at least), spring is in the air and I thought I'd give the trusty Nokia E72 a little makeover. And you're invited to watch. Maybe it'll inspire you to deliver some TLC (Tender Loving Care) to your own Symbian smartphone(s)? Comments welcome on makeovers that you've attempted.

Aside from the seasonal reference above, I was stung into action by my continued frustrations with the ex-review All About Symbian E72, which arrived with a silvery/grey keypad with white key legends - meaning that in many light conditions it was hard to see which key is which. And all the while I'd been eyeing up those owners with jet black keypads, with crystal clear key legends - surely I'd have an opportunity at some point to do something about the difference?

And then I spotted a black E72 keypad up for sale on eBay - you'd be surprised how many components get sold there, though you do have to watch out for fakes. At which point I resolved to grab it and use the opportunity to spring clean the E72 and to also get reacquainted with it after six months of Symbian^3 large-screened touch goodness.... 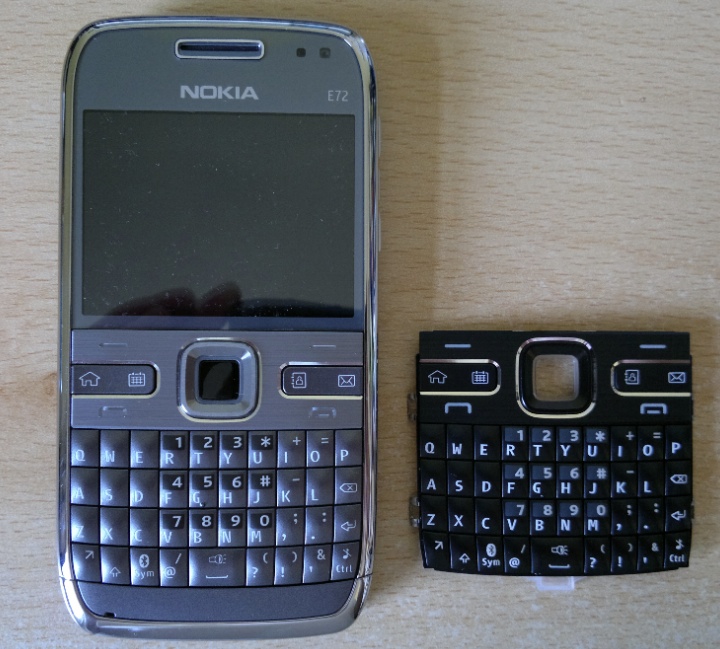 So what else was wrong with my E72? Well, and this is (I bet) a common problem, quite a bit of dust has managed to creep into the phone's shell and under the top layer of the screen. Here's what I see with the phone off - and yes, this is after a wipe of the top surface: 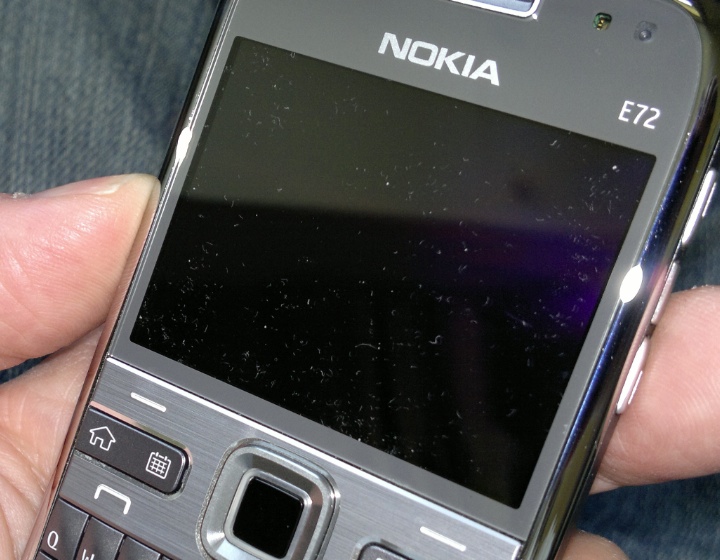 Not pretty. The E72 does have a rudimentary seal around the display area, but it's not a patch on that on later devices. And so dust gets in, on the underside of the main screen top layer and on the LCD display itself.

Time to take action. With my E72 now out of warranty, I felt happy opening it up. I took the back cover off and the battery out and saw two Torx T4 screws, either side of the battery bay. I got out my T4 screwdriver - what do you mean, you don't have one? - and removed these. Don't worry, this is about as tooled up as I needed to be: 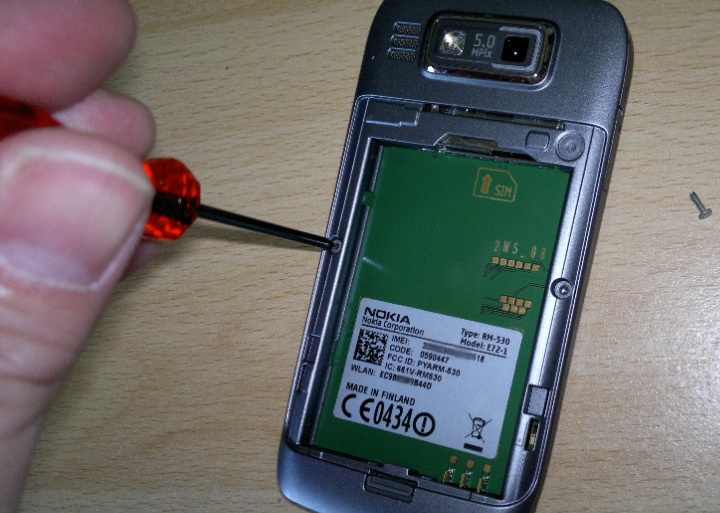 Next, the only slightly scary bit of the whole procedure, I took a small screwdriver and gently prised the two halves of the E72 case apart, starting at the top corners. After a couple of gentle prods, the case came apart like this: 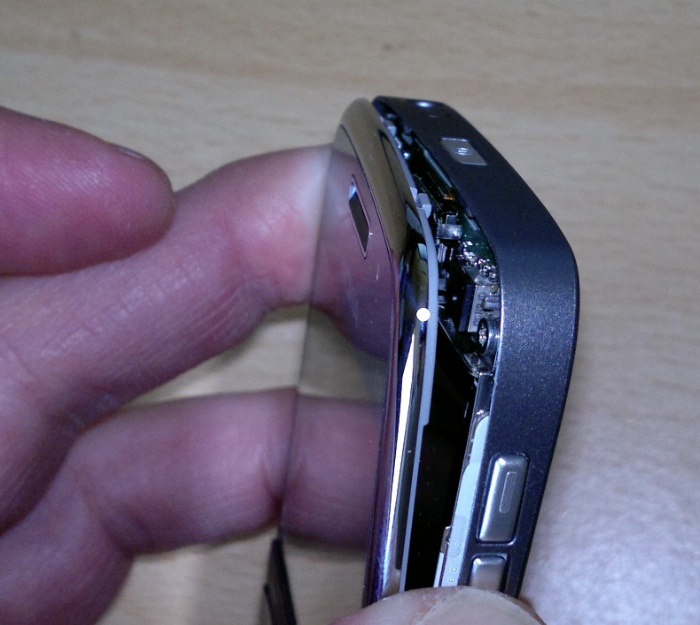 The rest of the case fell away and I then had the two halves of the phone on my desk: 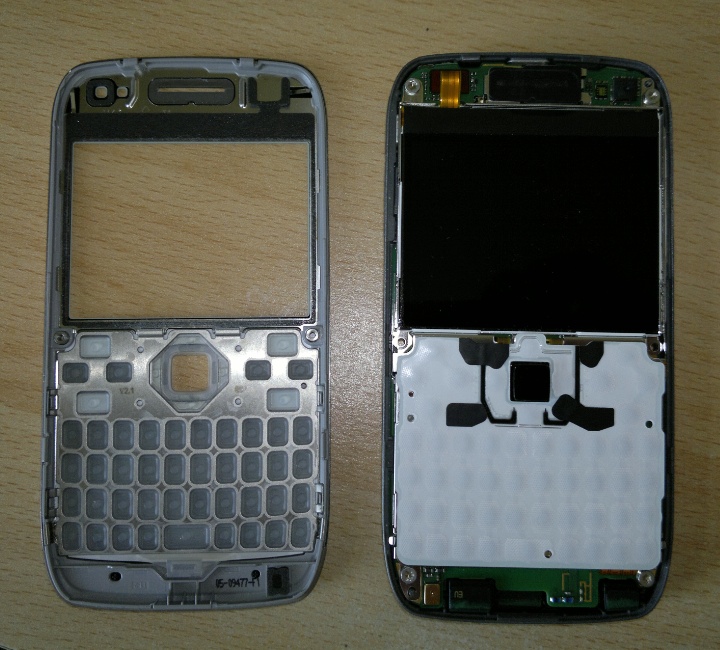 It's a very simple design, button-wise and the keypad is a doddle to replace, as you'll see in a moment. But first, let's do something about the dust. I took a IPA-moistened, clean tissue (or lint free cloth) and wiped over both the underside of the case front and the top surface of the main LCD: 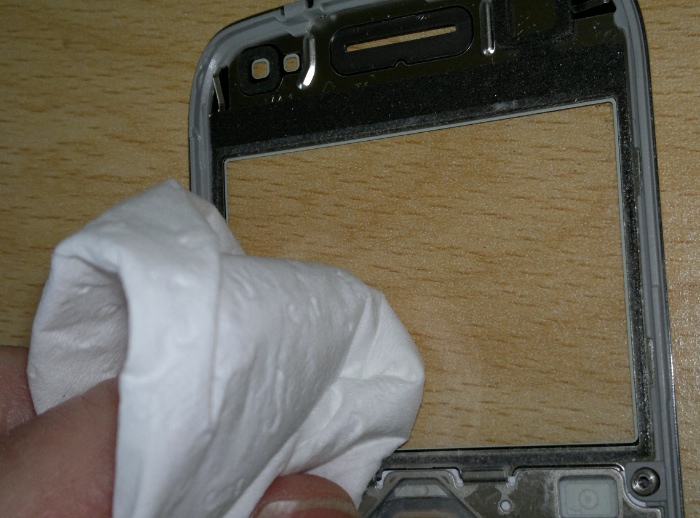 Much better. Though I'll probably have to repeat the procedure in six months time, no doubt, there's really not much of a seal on the E72 screen, sadly.

Now for the keyboard. I had my new keypad all pristine and ready. Note the tabs on the left/right/bottom that help it 'lie' in the keypad well in the E72's case front: 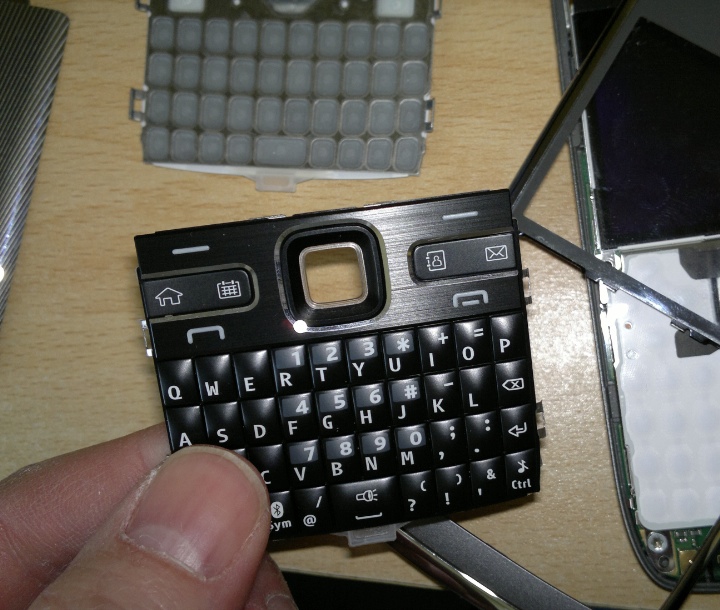 Now I popped out the old keypad and put in the new one, top edges first under the screw thread holes. The rest of the keypad just fell into place in the aforementioned 'well': 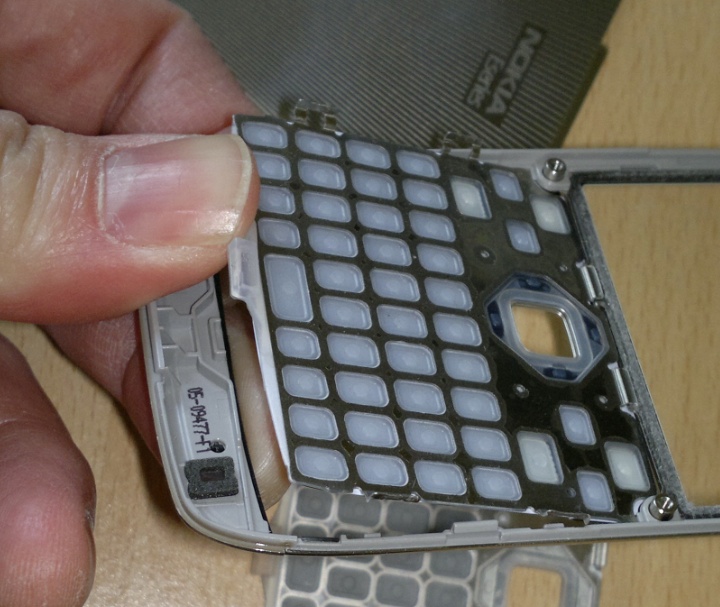 I popped the two case halves back together, starting at the bottom and then I put the T4 screws back. Here's the new keypad in place on the E72, comparing it visibility-wise with the appalling silver version: 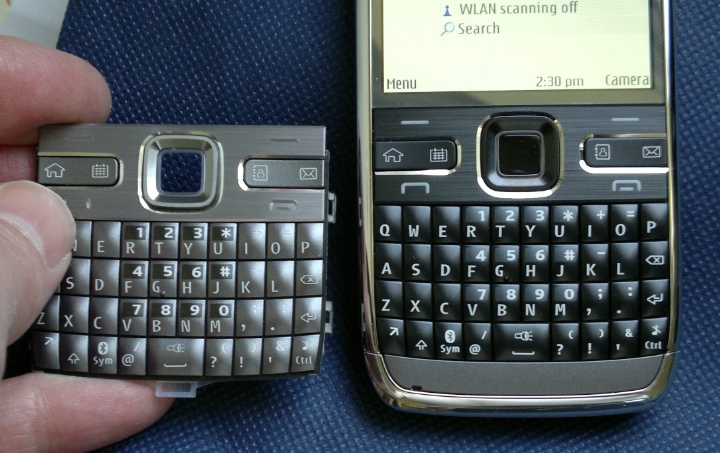 But I wanted to go further in giving the E72 a new lease of life. It may have escaped your notice, but microSD cards have been dropping a lot in price over the last few years. My E72 had a 8GB card in already, but a 16GB card is now the ridiculously small sum of £20 and the extra space will mean more podcasts before I have to have a tidy-up/prune, more music, more pre-loaded maps, and so on.

Time to pop out the old, clone its contents in my desktop card reader and reload onto my new 16GB card: 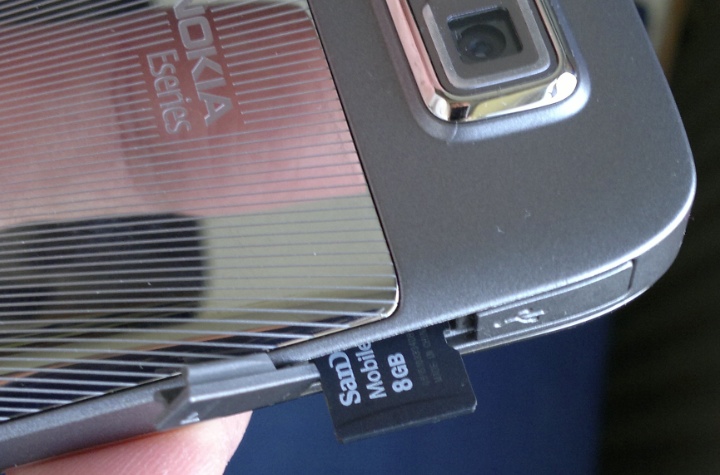 You may not know this, but batteries gradually die as they get used. Over a year or two, you can lose as much as half the usable capacity, depending on how well or badly you've treated the battery. I decided to buy a new BP-4L for the device, to get maximum capacity, relagating my old battery to the job of 'spare'. If you go buying spare batteries, make sure you get a genuine one (e.g. like this) and not one of the many cheap fakes - read the reviews for each item and look at the seller feedback and you'll soon spot the phoneys. As it happened, I had an extra spare from my old E90, too: 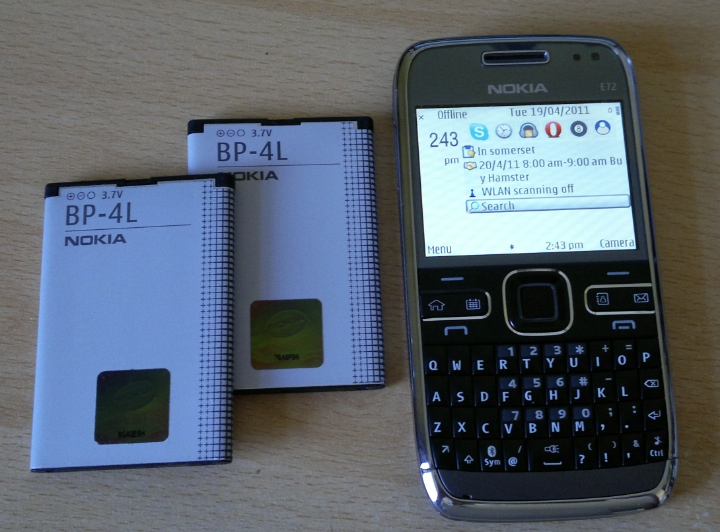 I'd go into detail about performing a software spring clean too, except for the fact that I'd done a hard reset (*#7370#) after the last firmware (v54) hit and so my E72 system was already pretty lean and mean. I'll make that a tutorial for another day. Plus, I've been experimenting with Ramblow, as a way to automatically kill idle processes and make sure the E72 doesn't run out of RAM too often.

In the meantime, I have an E72 with a keypad that I actually enjoy using in all light conditions, a dust-free screen, twice the storage and a fresh battery. Very nice!